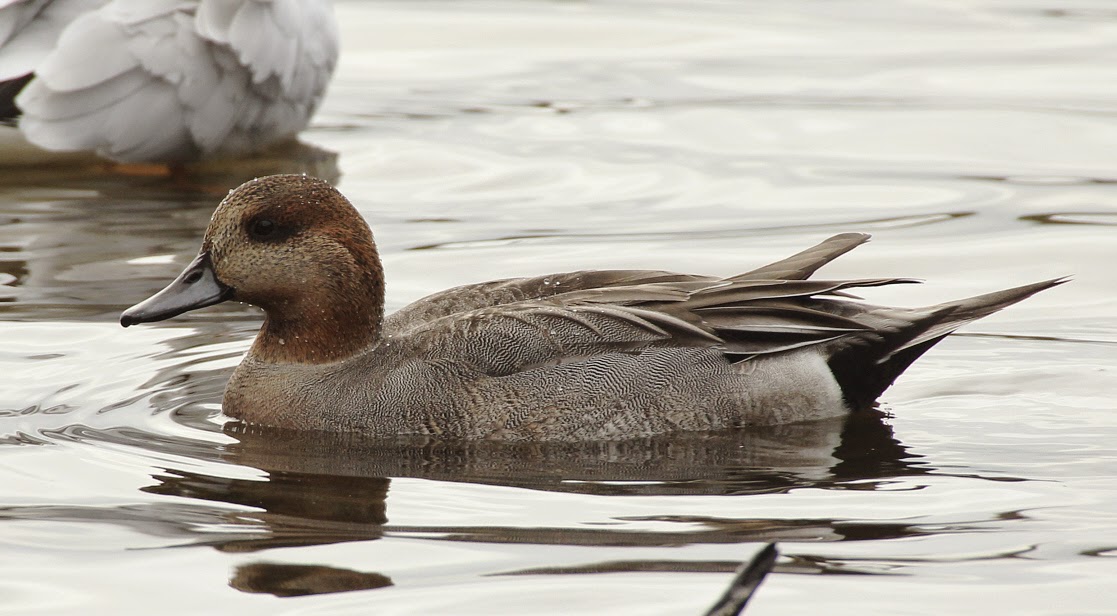 
This bird appeared on a lake that is frequented by many ducks released for shooting including lots of Gadwall, Wigeon and Pintail.  Several Gadwall x Wigeon hybrids have appeared here but while this is superficially similar there are a number of differences that point to Pintail parentage.  It lacks the brown edged scapulars but instead has a row of long curved pale-edged scapulars for example, and of course it has a distinctly long central tail. 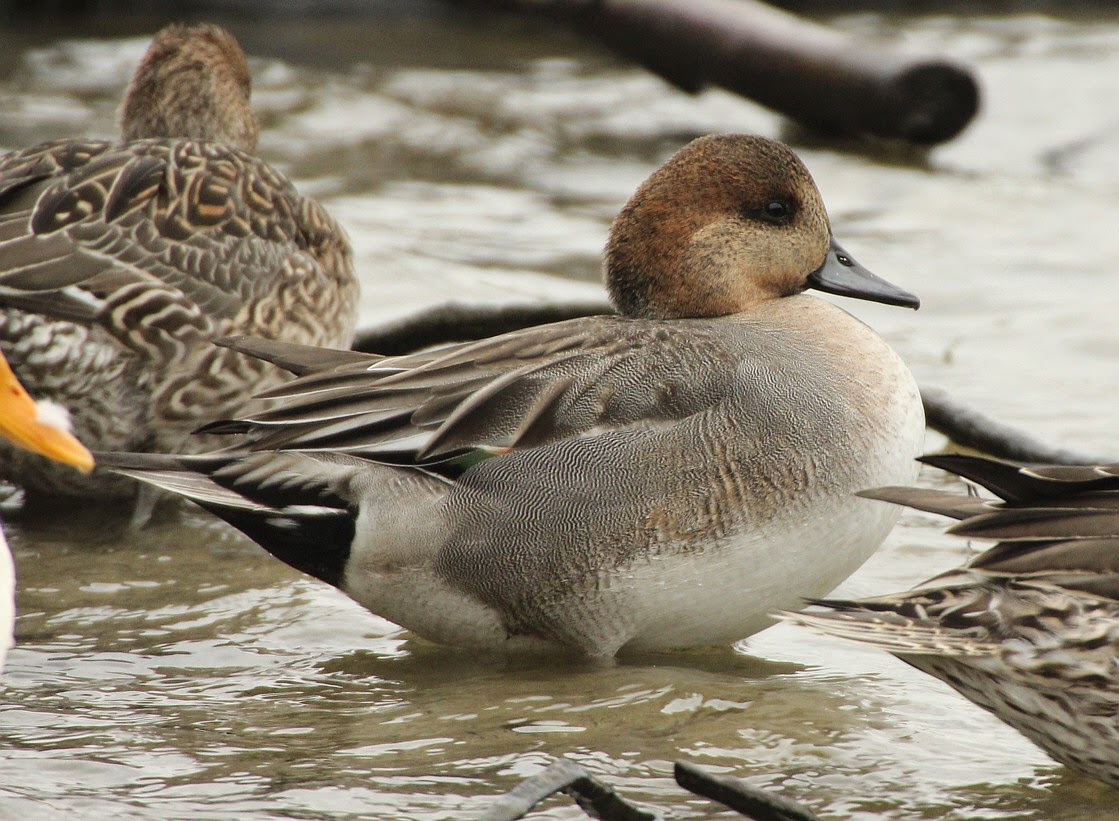 
What was presumably the same bird reappeared after a period of absence the following April.  It kept company with Pintails and on one occasion attacked the male Pintail shown with it in the second photo below when that bird showed interest in an accompanying female. 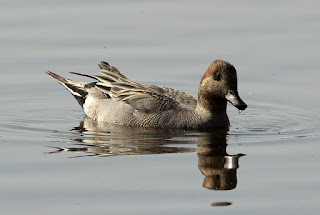 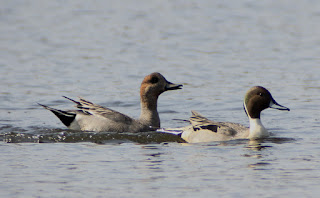 
Pintail influence wasn't immediately obvious to me in the next bird which, on first look, seemed very similar to a Wigeon except for the unusual head pattern.  I even started to wonder whether Eurasian Wigeon might show such an anomolous head pattern through mutation or intersex rather than through hybridisation.  But then the bird showed a bit better and I started to see more anomalies.  Firstly I noticed the tertials weren't dark with clear pale edges as on all 3 Wigeon species.  They didn't contast so much with the scapulars being grey with more diffuse narrower dark centres - and indeed that pattern on the scapulars was more marked than it is on Eurasian Wigeon.  Then I noticed white on the edges of the tail and a row of whitish grey feathers above the tail (I thought uppertail-coverts at first but they may have been the lower row of rump feathers).  It was all starting to look a bit Pintail-like.  Pintail influence wasn't obvious on the front half of the bird, but actually there were hints of it in the head pattern.  The pale forecrown stripe had a narrow diffuse dark line running through the middle of it which was very obvious when the bird was front-on and there was a suggestion of the base of the pale line extending up the side of a Pintail's neck on one side, only visible at certain angles. 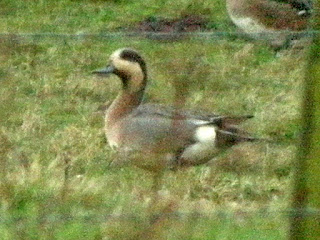 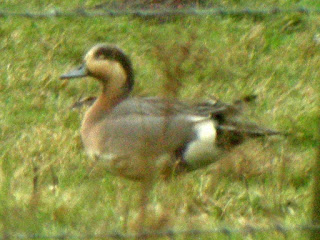 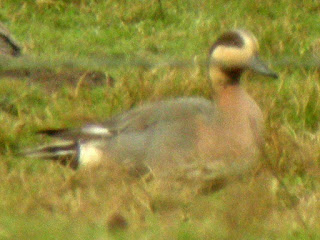 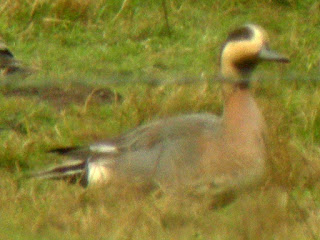 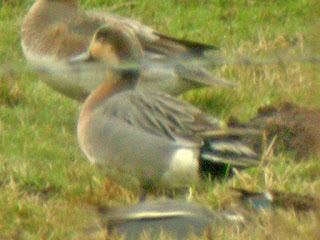 
This bird was still present a couple of days later though still a bit distant for photography.  I managed better views of the wing pattern which showed a mixture of Wigeon and Pintail influence.  It showed the white inner secondary of Wigeon and a hint of white on the forewing (just on the larger coverts), but it also showed a broad white trailing edge to the secondaries and gingery buff wing-bar at the base of the speculum like on Pintail. 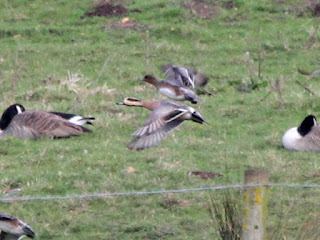 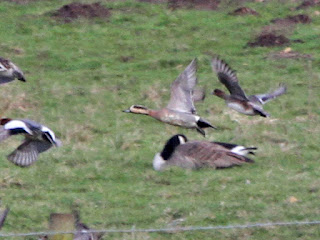 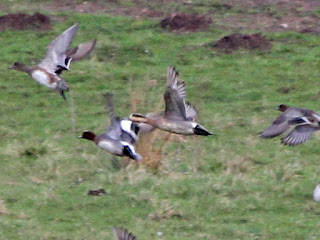 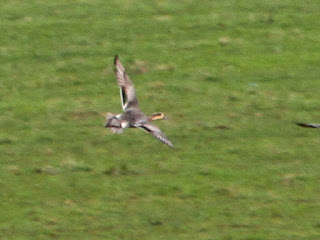 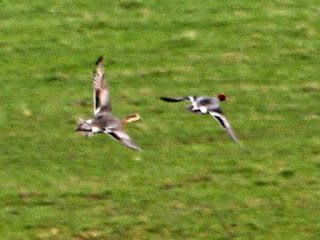 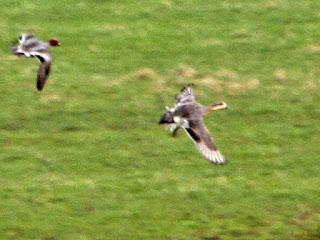 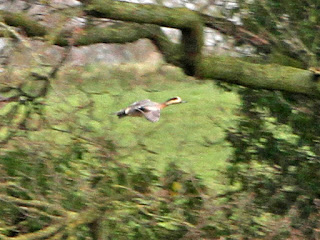