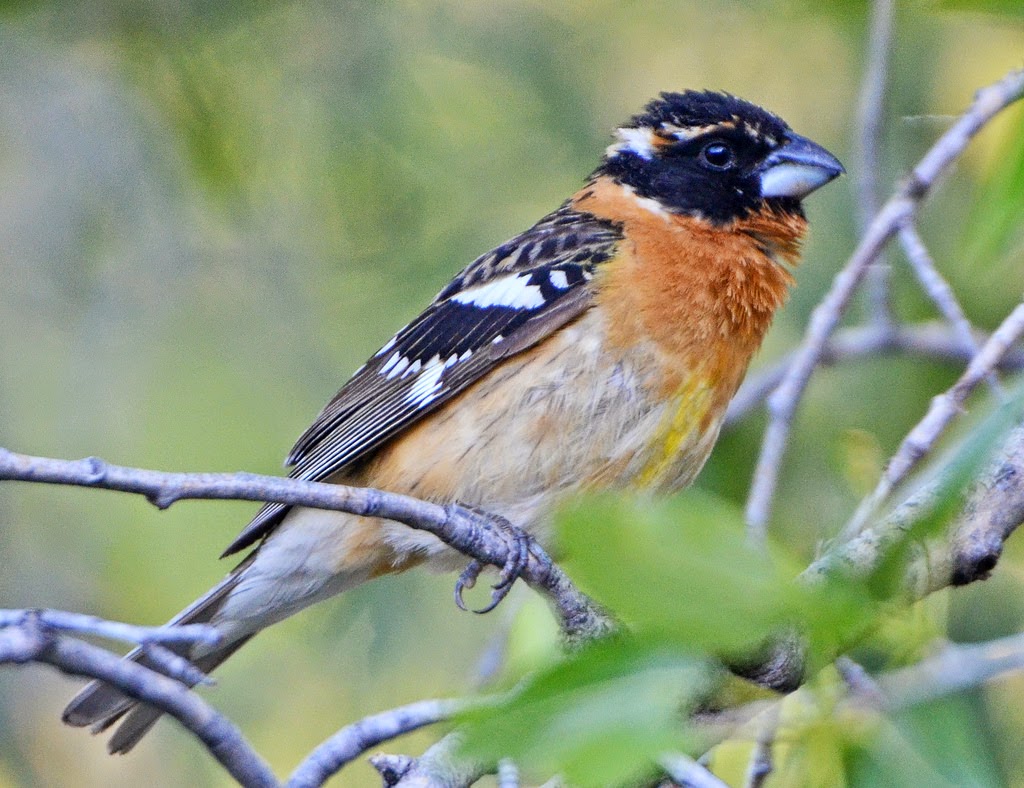 
Steve notes that the colour is limited to the chest, with more reddish hues centrally, combined with the largely white underparts.  This would be unusual for Black-headed Grosbeak (even first year male) and common among hybrids.  Furthermore, Steve says, the white striping on the head is a Rose-breasted Grosbeak trait.  Black-headed Grosbeaks usually show buff stripes. 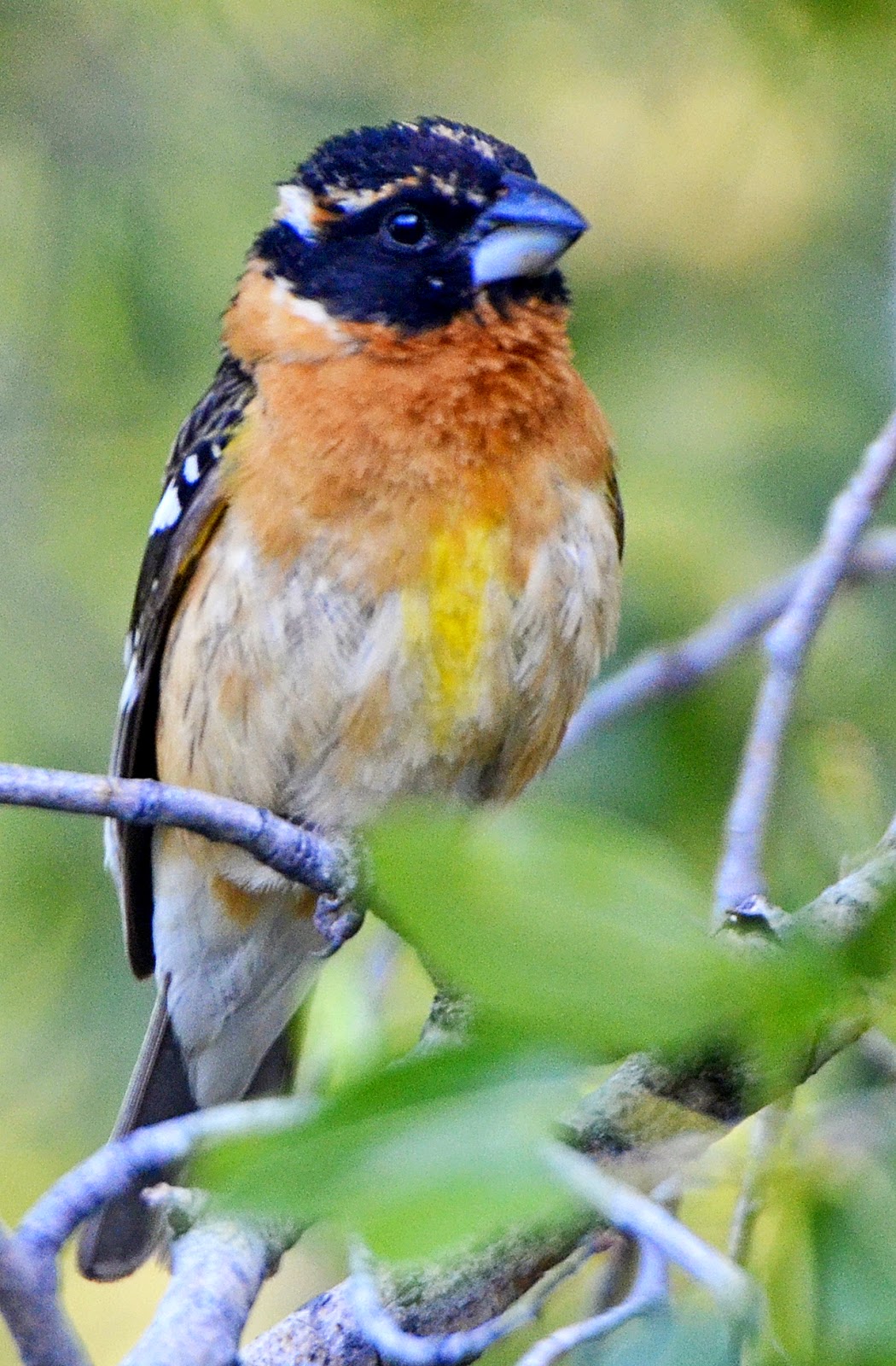 
Steve says he consulted with several others about the next mystery bird.  Their advice points to it likely being a female, probably an older bird showing male-like traits.  That explains the bright orange-tinted yellow triangle on chest which would point to Rose-breasted Grosbeak, albeit aberrant.  However, the streaking is more like Black-headed Grosbeak as is the buff in the forward portion of the supercilium.

Steve points out that both photos are a bit off colour-wise.  The first was exposed more correctly, but there was some blur due to slow shutter speed, making the streaking appear less prominent (and there's a peculiar green hue which is unexplained).  The second photo was underexposed, but shows basic patterns better. 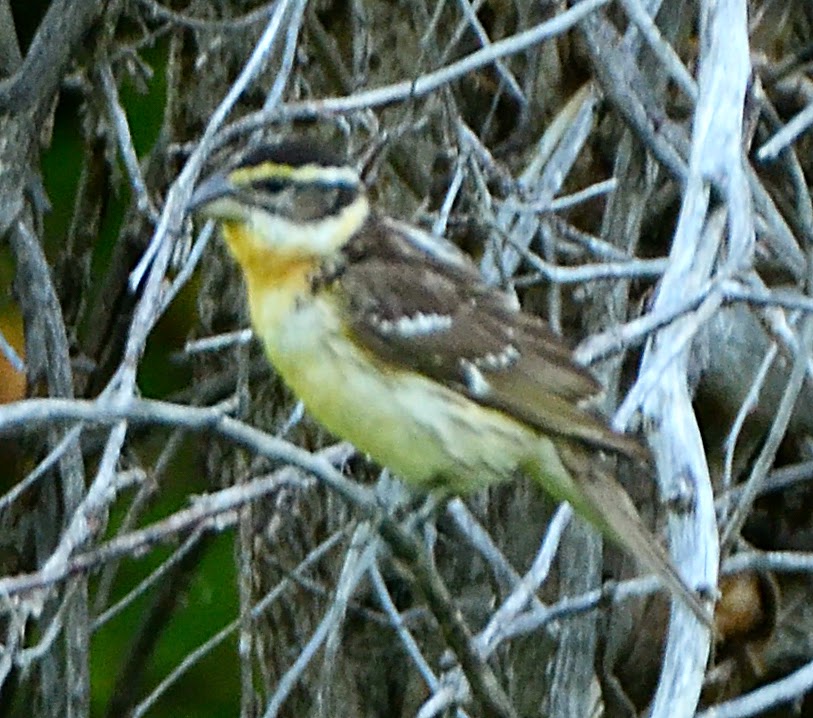 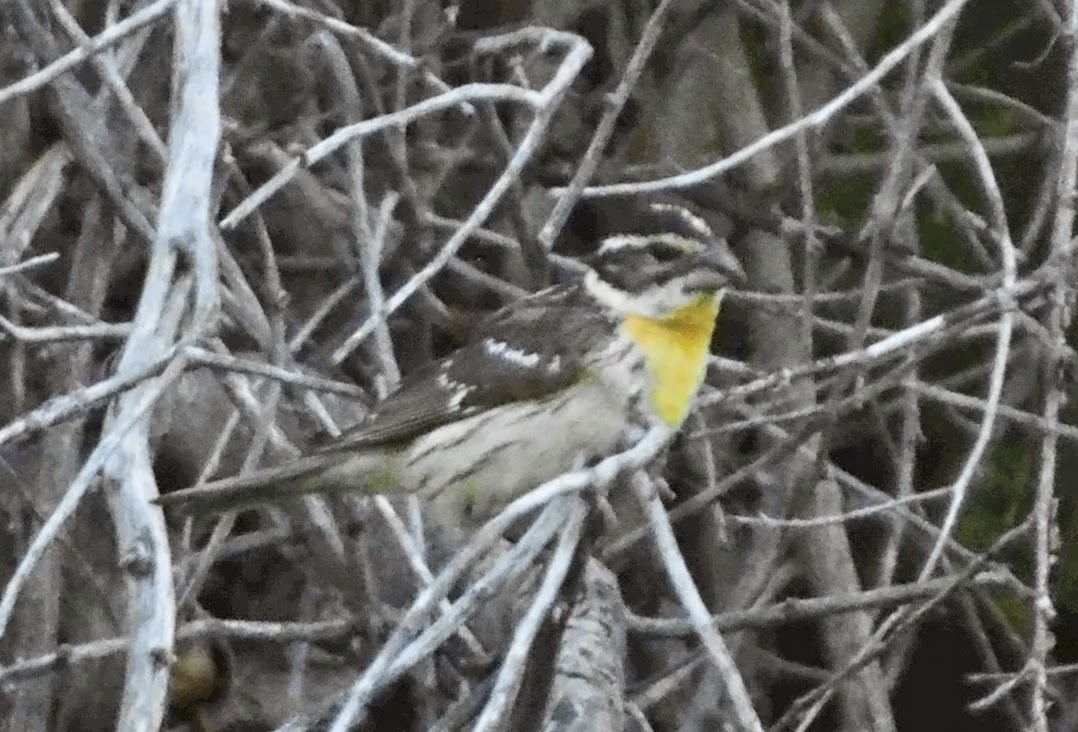 
The next one is believed to be most likely an adult female in fresh winter plumage.  Steve notes that the heavy streaking on sides/flanks seems beyond the range of a Black-headed Grosbeak at this season (some juveniles approach this).  Also, the intensity of colour on the chest combined with the rather white belly seems odd for a Black-headed Grosbeak.  On the other hand the orange throat as well as chest seems unlike a Rose-breasted Grosbeak, and if an adult female, one would expect more streaking on centre of chest. 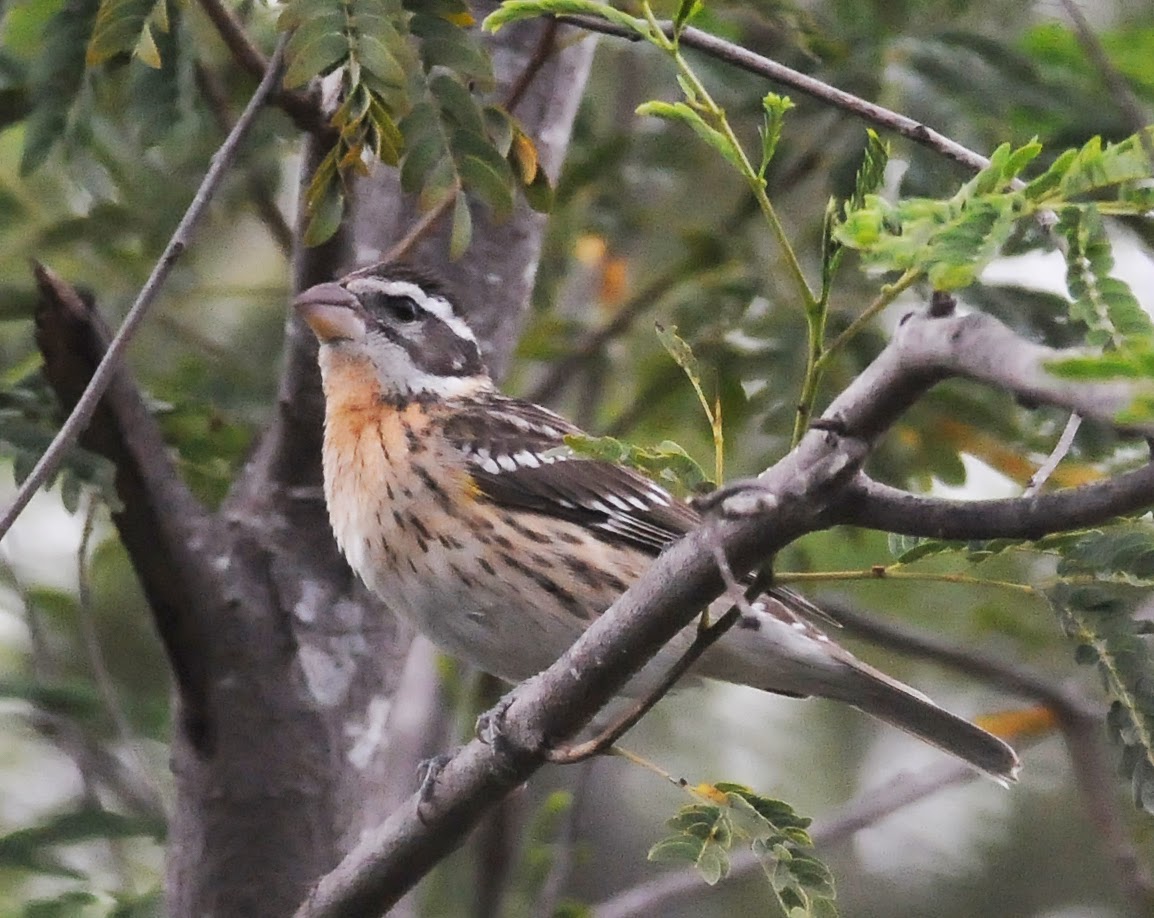 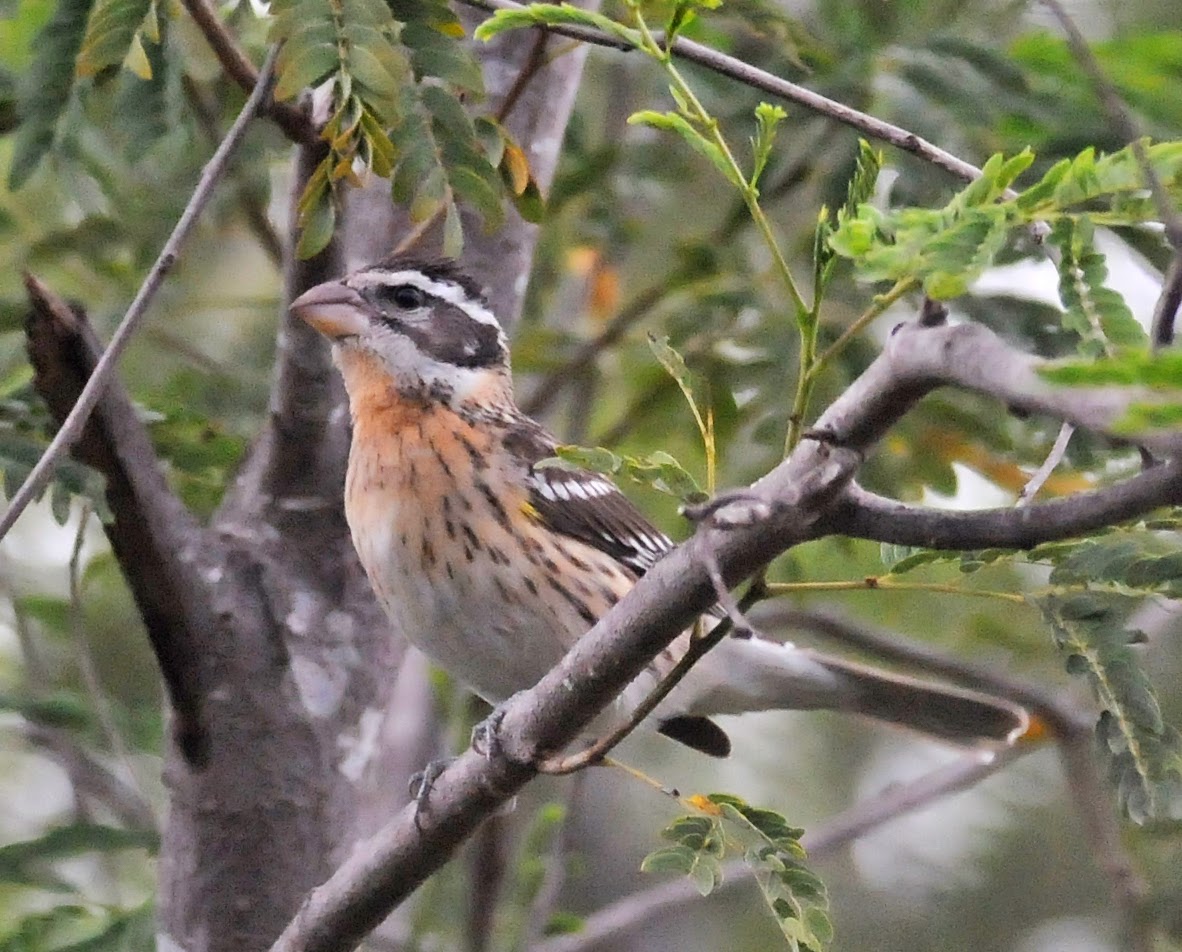 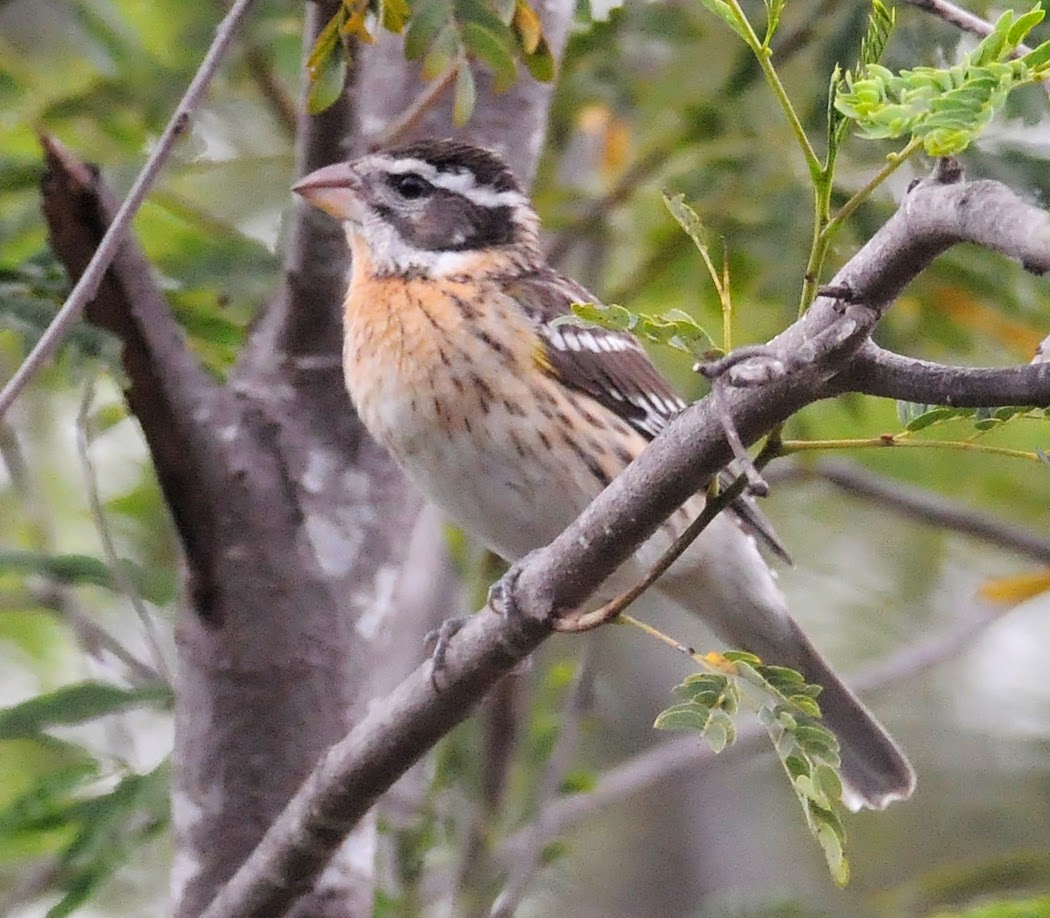 
For the next one Steve writes:


"The fine streaking is like that of BHGR, but the extent is more that of RBGR (streaking on undertail coverts not right for BHGR?). The color beneath is yellow, but forms a triangle. In this apparent female, one would wonder why the color would be in the distribution of a male RBGR, but in the 3 other female-type hybrids that I've found, this has been the case. The bill is diffusely pink with some vague duskiness, in between BHGR and RBGR." 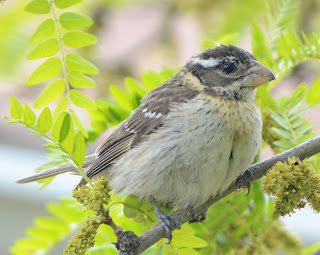 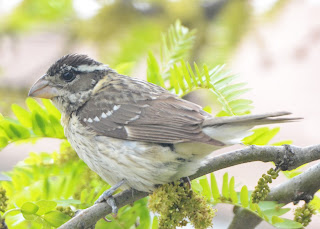 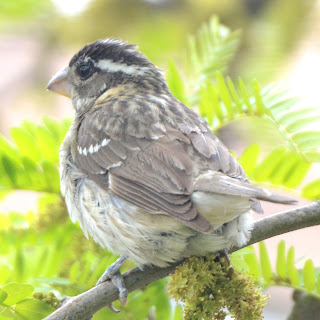 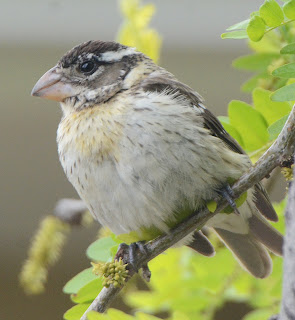