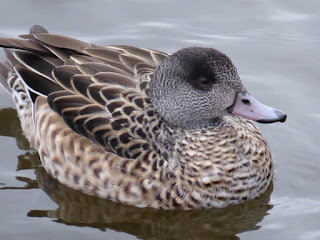 
One parent of this hybrid seems easier to resolve than the other, though arguably is not the only possibility.  The reddish pink colour on the bill extends well down the bill suggesting a species with a mainly red bill, and Cape Teal fits that bill.  There are other red-billed species, and some Wigeon hybrids are known to show a pinkish bill, but the general appearance of this bird recalls Cape Teal a bit, so that seems a good starting point.  The shape of the bill, quite flattened near the tip, also fits Cape Teal, as does the black base of the bill (although the latter could come from the other parent).  Cape Teal also shows black along the edge of the bill in the distal third, like this bird, and that for me is the clincher.

But Cape Teal doesn't have so much black on the nail, it doesn't have the dark patch round the eye (the eye itself would be pale too) and it is a greyer bird overall.  A number of people have suggested a Wigeon species as the second parent, and that was my idea too.  The dark patch round the eye on an otherwise fairly plain head suggests this, as do the white tertial edges.  But which Wigeon?  Neither Eurasian nor American Wigeon have so much dark extending above the eye to the top of the head, but Chiloe Wigeon does.  The flanks are a bit orangey, which supports Chiloe Wigeon.  I wondered if such a plain bird could be produced from a Chiloe Wigeon, that being such a striking species even in female plumage, but Joern has confirmed that it can.  And what's more he tells us that there have been examples of Chiloe Wigeon x Cape Teal seen in the UK that have looked much like this.

Apparently Chiloe Wigeon x White-cheeked Pintail can also look surprisingly similar to this, so it would be helpful to get a view of the wing pattern to be 100% sure, but for now it seems very likely indeed that this is a Chiloe Wigeon x Cape Teal hybrid.