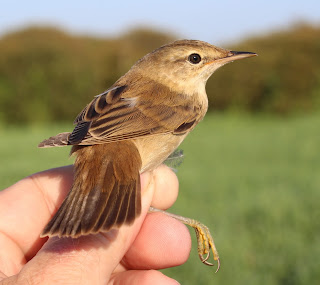 The upperparts colour tone is close to Reed Warbler but this bird has obviously dark centres to the wing feathers with contrasting pale edges - especially obvious on the tertials which are quite wrong for Reed Warbler.  Note too the strength of colour on the rump.  A hint of dark streaking in the scapulars is visible on one or two of the images, though these are way plainer than they should be on a fresh Sedge Warbler.  It seems to have some pale buffy coloiur extending into the collar which I would not expect to see on a Reed Warbler.  I'm not a ringer so may be misinterpreting the spread wing shot (below), but I think the way the the tip of the second primary (the outermost long primary) falls well short of the adjacent third primary is closer to Reed Warbler than Sedge Warbler (somebody please correct me if I am wrong about that).

It is sometimes said that this hybrid may be misidentified as a vagrant Black-browed Reed-Warbler.  Some hybrids may look more like that species but I don't think you would make the mistake on this individual.  The Sedge Warbler x Reed Warbler hybrid from Finland that featured in British Birds 78: 434-437 (Sharrock, 1985) has a more obvious head pattern and looks like it had plainer wings too, so some individuals may perhaps be more like Black-browed Reed-Warbler than this one.

Probably a tougher ID challenge is separating these from Sedge Warbler x Marsh Warbler hybrids.  That's a hybrid that has been proven to occur in Norway - see Journal of Ornithology 151.2: 513 (Lifjeld, Marthinsen, Myklebust, Dawson & Johnsen, 2010). 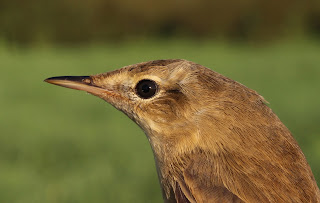 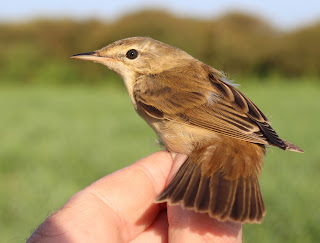 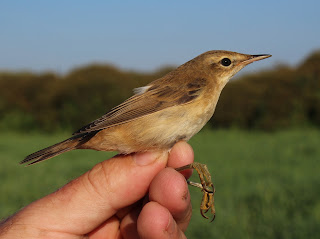 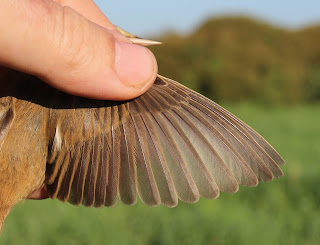