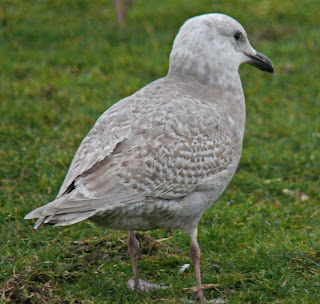 I don't mind admitting that I was a bit surprised to see a claim of Thayer's Gull x Iceland Gull, even with the qualifying "presumed".  There is enormous difficulty in separating the two species (at least from the perspective of a European who isn't a gull expert), there is uncertainty as to the range in variation of each taxa and there are unresolved questions over what the taxa even are (i.e. does the kumlieni race of Iceland Gull represent introgressive hybridisation between Thayer's Gull and nominate Iceland Gull?).  But from Steve's much better informed and experienced perspective, thayeri and kumlieni are different taxa no matter how you slice it, and so there should still be intergrades or hybrids.  And, he says, this is what he thinks one would look like.  Well that seems fair to me, and I'm certainly in no place to argue against it! 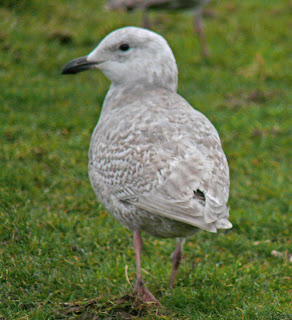 
For an overview of the situation with Thayer's, Kumlien's and Iceland Gulls, this page from the Gull Research Organisation is helpful.