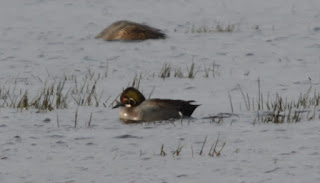 
Although this hybrid may occur in the wild any such bird in Europe is surely most likely to have escaped from captivity where both species are commonly kept.  Joern writes about this bird:


"I first received the pictures by Eike Schulze [photo IDs 2646-2648, below] in early 2015, which already made me conclude that the bird was most probably a Falcated duck x Baikal Teal hybrid.  Falcated duck as one parent is easily concluded and was already thought of by the observers.  The head pattern and the curved tertials are traits which made it easy for me to confirm this parent species.  However the other parent is not that apparent from this photoset.  Nevertheless the head pattern with the strange isolated oval patch on the rear cheek indicated that the other was something unusual.  Most closely the bird resembled a captive young male hybrid Falcated duck x Baikal teal shown in one US forum at that time.  However while the true colours were very well visible in the sunlight in Eike Schulzes photo series, several details were not clear enough.  For example it appeared as if there could be a paler brownish bar on side of the black undertail coverts, which would be a strong pointer to Baikal teal parentage.  The later photo series by Christopher König was under different light conditions, but showed some more details.  Head pattern was well in accordance with the captive hybrid, though the oval cheek patch of the wild bird appeared darker.  And on the black undertail coverts a reddish brown stripe was visible in those photos with open wings.  As said, this is a good indication of Baikal teal parentage.  The breast coloration also points to a species with a pale pinkish brown breast as the second parent, so Baikal teal fitted in also for this trait." 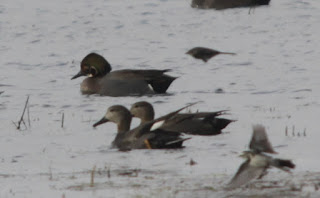 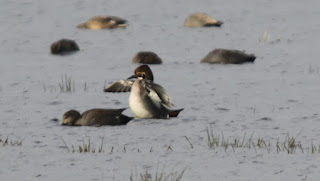 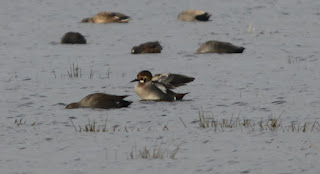 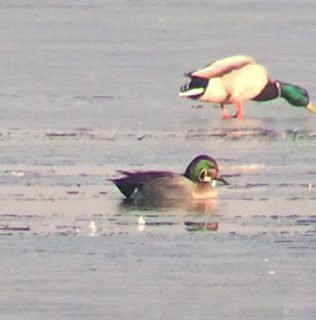 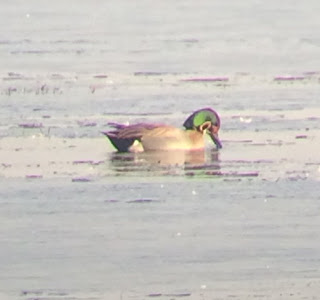 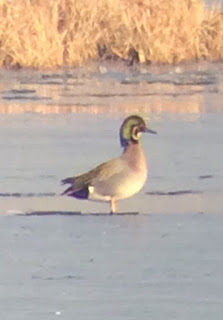 
The drawing below is based on two birds, the free-flying bird from Germany shown above (photo IDs 2645-2651) and the captive one from the US mentioned in the text above.  Joern tells us that his drawing is somewhat intermediate between these two birds, although one of the tertials may be slightly too long in the drawing, at least for these two individuals (though it may fit others - we certainly do not know the full variation of this cross yet).  Joern also tells us that a third hybrid of this type observed in Japan at the end of 2015 was generally similar, but with black cheek patches. 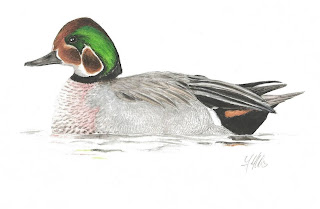