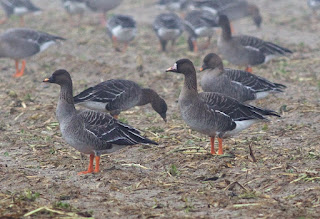 
Convincing examples of hybrids between some of the wild Anser species that occur in Europe are surprisingly hard to come by.  Perhaps that is because the hybrids are genuinely scarce, or perhaps it is hybrids are difficult to detect and even harder to prove, with variation in parent species considerable.  I suspect it's the latter but maybe in time this will become more clear.  This one looks like a promising candidate to me, although proving it is not an odd but genetically pure Tundra Bean Goose is not straightforward.

The white round the base of the bill is not enough on its own to reject pure Tundra Bean Goose - quite often they have a little white round the bill.  Usually this is broken on pure birds, not surrounding the whole of the upper mandible in a continuous line.  Not only is it continuous here but it's quite broad at the top too.  Perhaps that is possible in pure Tundra Bean - it wouldn't surprise me if so - but this bird also has a lot of dark shading behind the white, something that I don't recall seeing to this extent on a Tundra Bean Goose.  The extent of orange on the bill may not be too excessive for Tundra Bean Goose (though is not usual) but it also seems to have a pinky tone to it.  I think in combination these features point to a likely hybrid origin, although I am troubled by how perfect the rest of the bird looks for Tundra Bean Goose.  Maybe it is just a very unusual Tundra Bean Goose, but I am more convinced by this bird being a hybrid than others I've seen where the hybrid ID has been suggested.

In addition Diederik thought this bird called differently from the Tundra Bean Geese.  He has a recording of it at waarneming.nl.  I think it's quite a subtle difference, but that may be because I don't hear Tunrda Bean Geese calling often enough!

As always, comments are welcome! 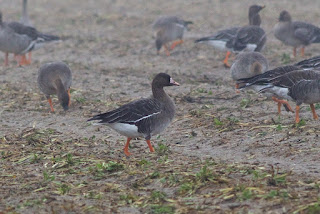