Next to Greylag Goose x Canada Goose, this seems to be the most frequently-occurring goose hybrid in Norfolk at the moment, although I am not sure why.  Several reports of Snow Geese have turned out to be these birds.  This first two shown here were alongside 2 Ross's Geese among a flock of feral Barnacle Geese. 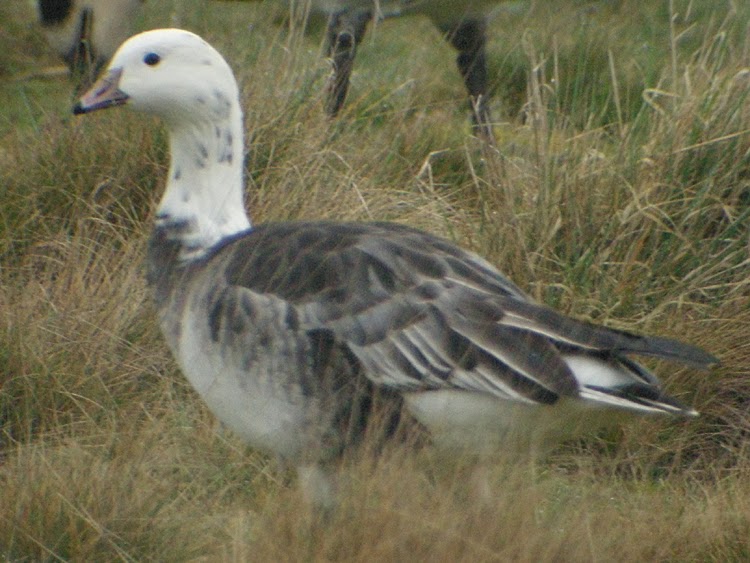 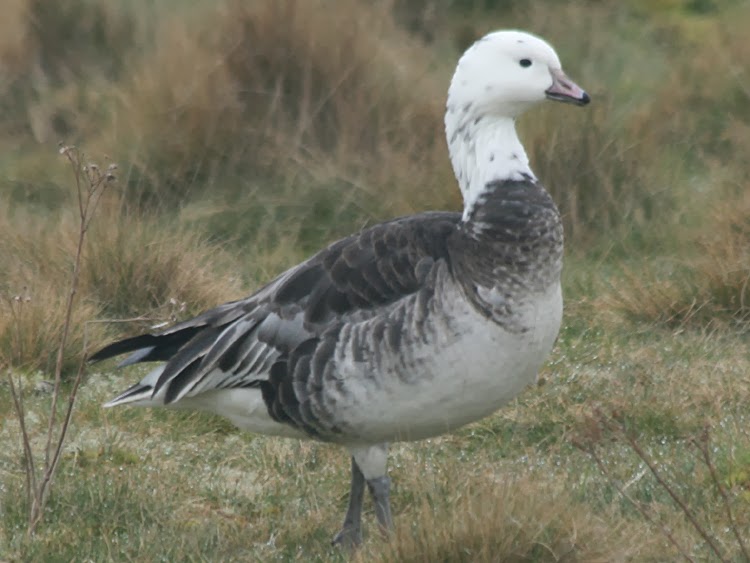 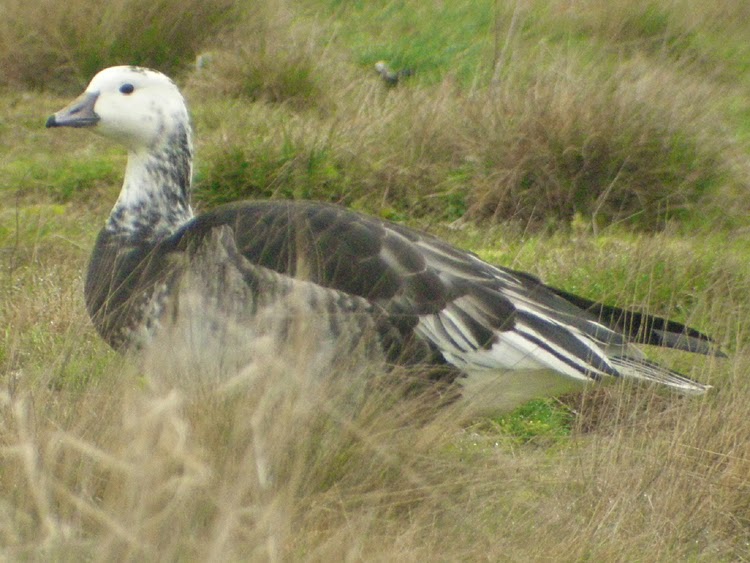 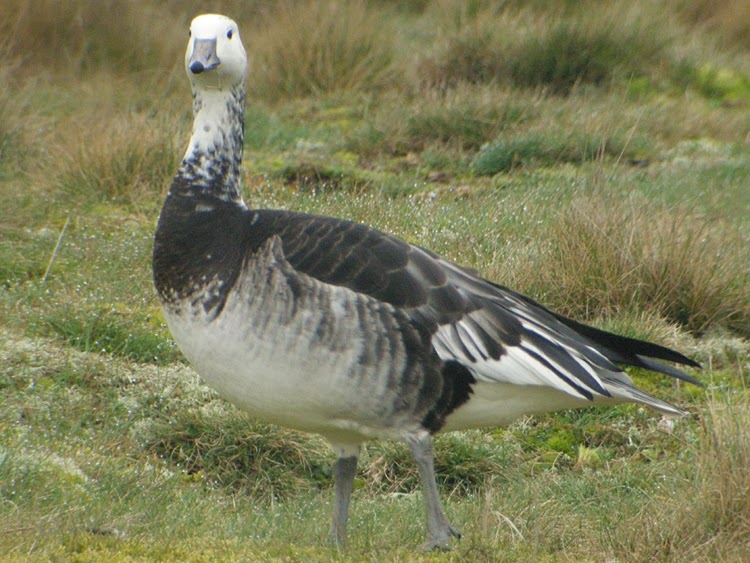 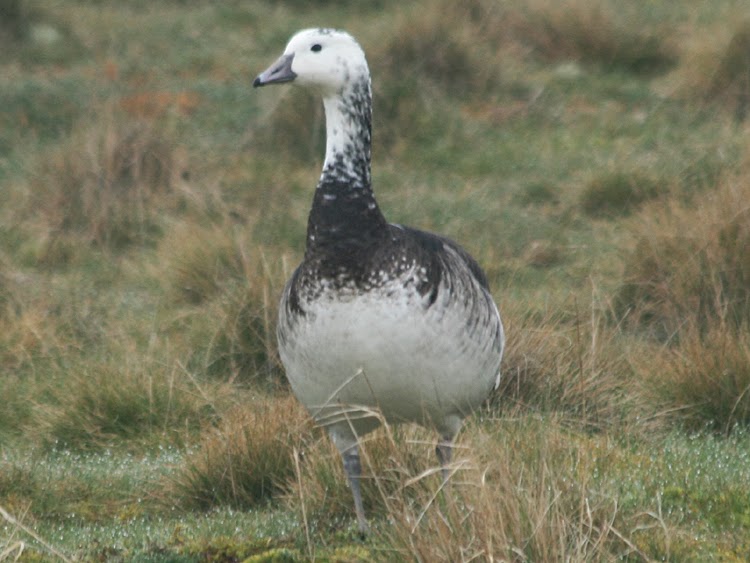 
The next individual also normally associated mainly with a small feral flock containing both Barnacle Geese and Ross's Geese, although when I first saw it it was in a flock of Canada Geese.


This bird was also reported at nearby Bayfield Lake, which is the same location as where the next photos were taken 3 years later.  However the two birds photographed this time were much closer to Barnacle Goose in appearance than this hybrid usually appears, prompting questions over whether they could be backcrossed.  The working assumption is that this intra-generic hybrid should be infertile, in which case they cannot be backcrossed, so either it's just within variation for the hybrid or else the assumption is incorrect.


The following two birds were photographed in a wildfowl collection but according to the owner they did not belong there and arrived on their own accord.  In most respects they resemble other examples of this hybrid but the neck appears a bit long in some photos.  The possibility that Canada or Cackling Goose might be a parent instead of Barnacle Goose is perhaps not completely eliminated, but I would expect it to look browner if that were the case.  Note how one of the birds has a much brighter bill than the other.


Although never far away from feral Barnacle Geese the next bird is often mingling with wild Pink-footed Geese, and in at least winters it has been reported erroneously to the rare bird news services as a blue morph Lesser Snow Goose.


The next bird appeared among wild Pink-footed Geese.  Unfortunately it was very distant so not seen well, and photographed even less well.  Even in poor views it was clearly different from the widely-observed hybrid that had been wintering with Pink-footed Geese in Norfolk during previous winters (see here), being much smaller, darker backed, having more white on the neck and a duller bill.  It seems to fit Ross's x Barnacle fairly well, but had more white in the tail than this hybrid usually shows.


Another bird that turned up among feral geese in Norfolk - perhaps one of the same birds as seen elsewhere?


The next bird is intriguing as it differs from most examples I've seen of this hybrid in having much more white in the plumage, most obviously on the upperparts.  The white plumage and white edges to the tertials suggest Snow or Ross's Goose parentage with the small size and the structure fitting the latter best (although we are not agreed on that - one view is that the size/shape of the bill and shape of feathering at the base is subtly different from Ross's x Barnacle and more like what we might expect on Snow x Barnacle).  It does not resemble Ross's Goose x Canada/Cackling Goose hybrids and the blue-grey tones to the wing feathers seem to me to suggest Barnacle Goose.  As always, comments are welcome so if anyone has any other thoughts please get in touch.  Other photos of this bird appear on the Devon Birds website (those on the entry for 18th February 2015 are perhaps the best). 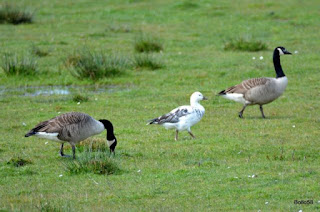 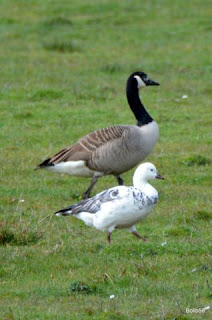 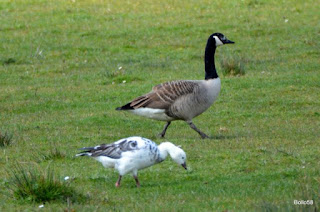 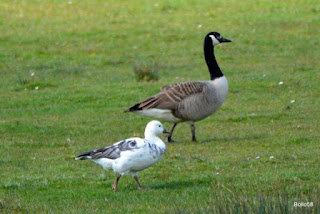 
This bird remained asleep for the whole duration of my visit, but as I knew there was a Ross's x Barnacle Goose here I assumed it was the same bird. 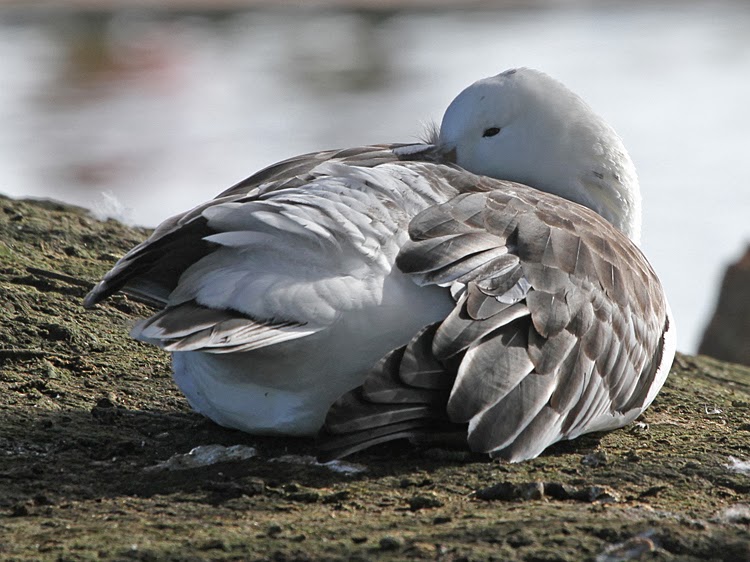 
I'm not sure if this one was the same bird too - if so it looks quite different from how I'd imagined mine would have done had it woken up.  In fact it recalls the Devon bird above in the extent of white in the plumage.  The grey areas seem unsually dark too.  Howver it is hard to see what else it could be. 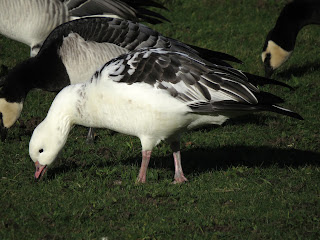 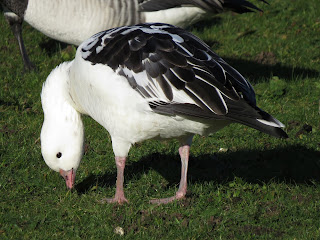 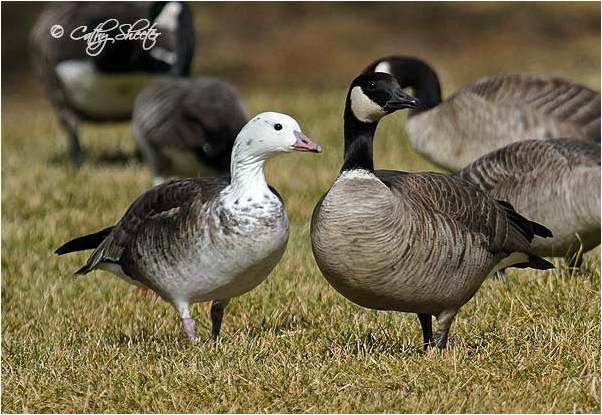 
This bird was smaller than a Snow Goose x Cackling Goose hybrid Cathy photographed at the same site a couple of days earlier, and other differences confirmed it was indeed a different individual. 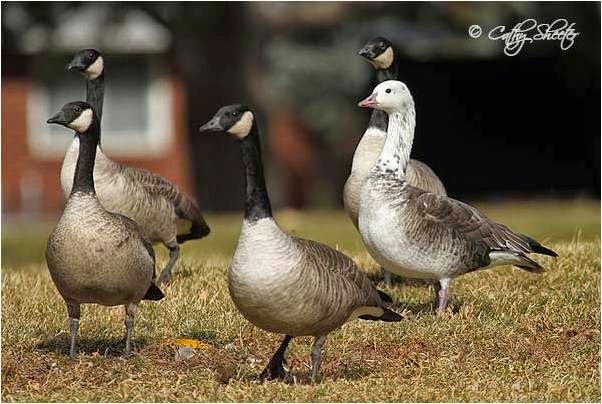 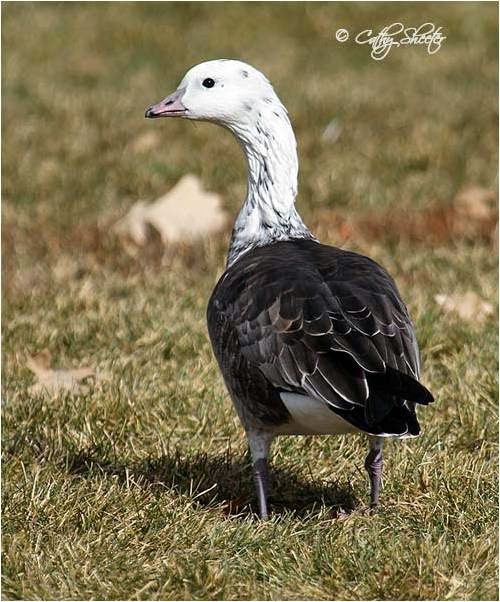 
Steve informs us that the next bird was clearly the smallest goose among several hundred Canada Geese (both parvipes and moffitti) and Cackling Geese (mainly hutchinsii but also a couple of taverneri).  The tiny size shows up in the next photo as does the very delicate head and bill.  Steve believes that what looks like a hint of a grin patch is mostly due to the extensive dark on the lower mandible. 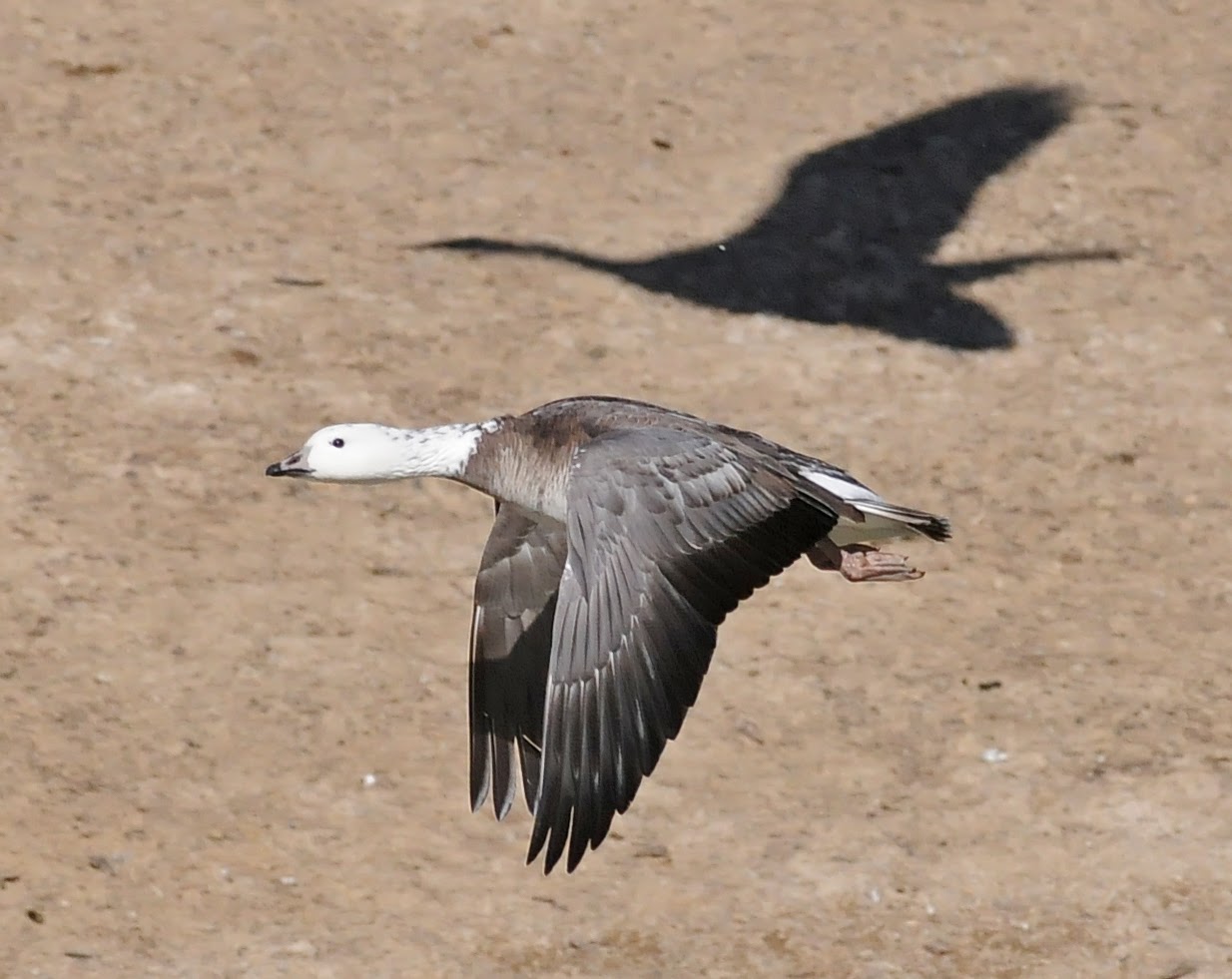 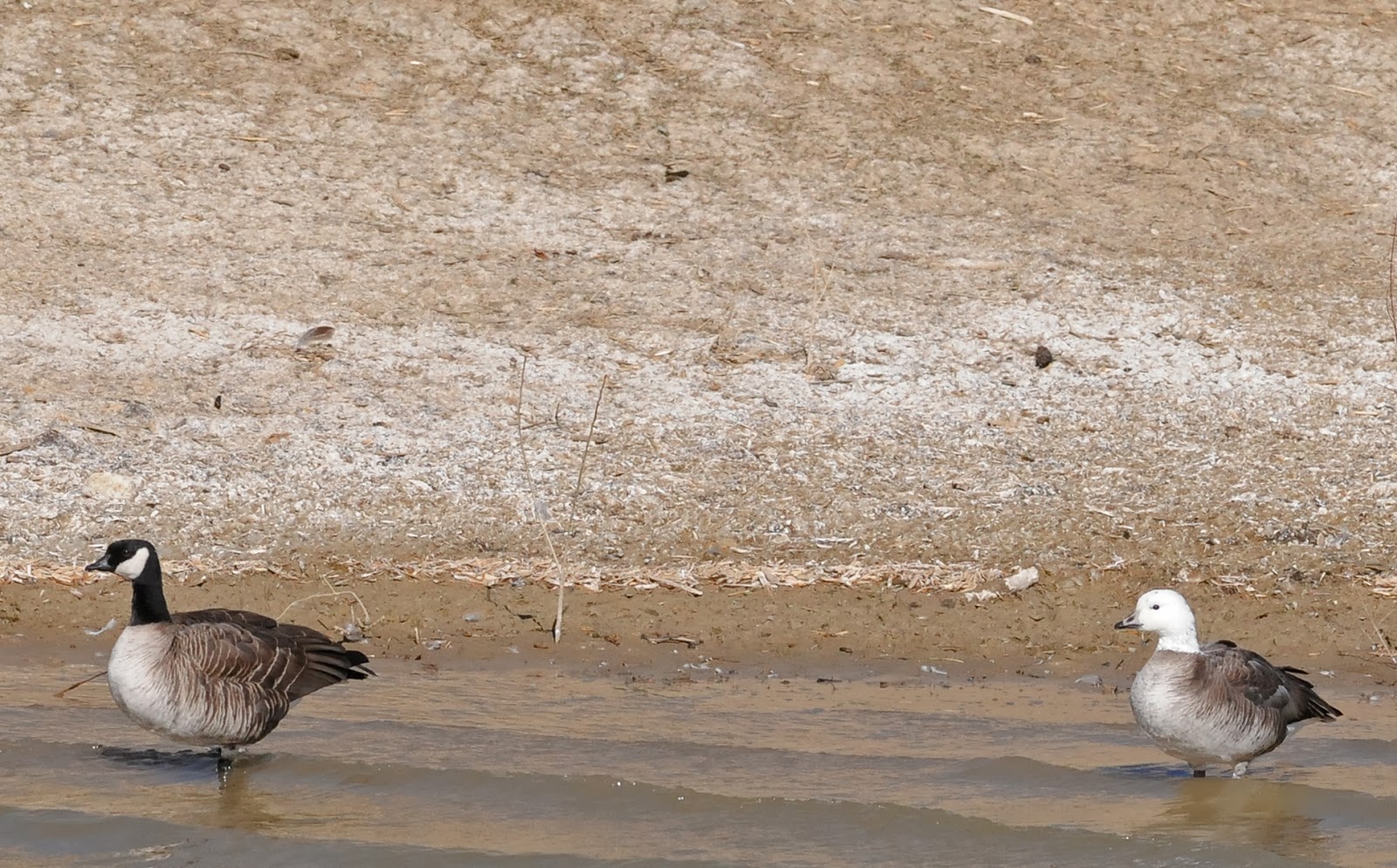 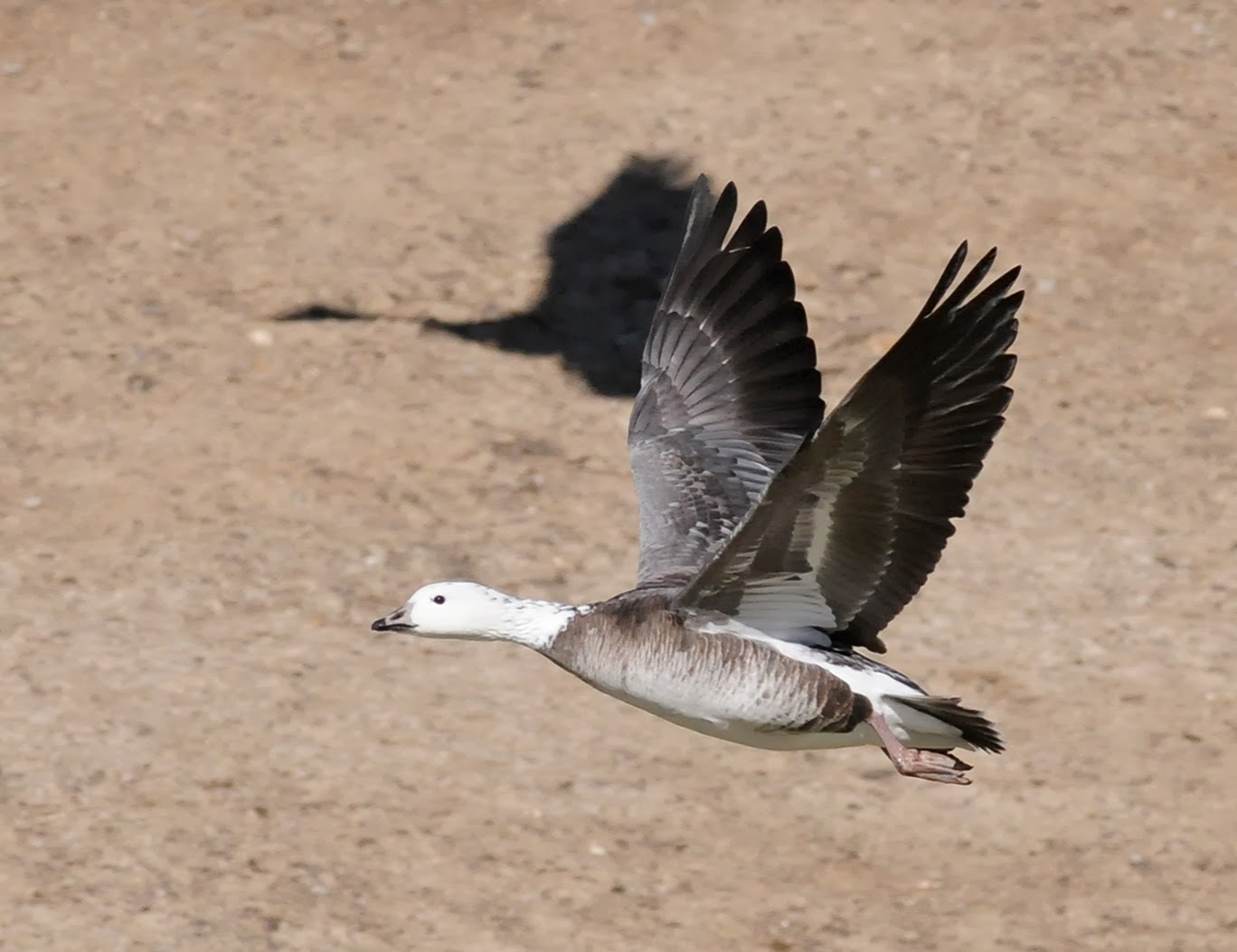 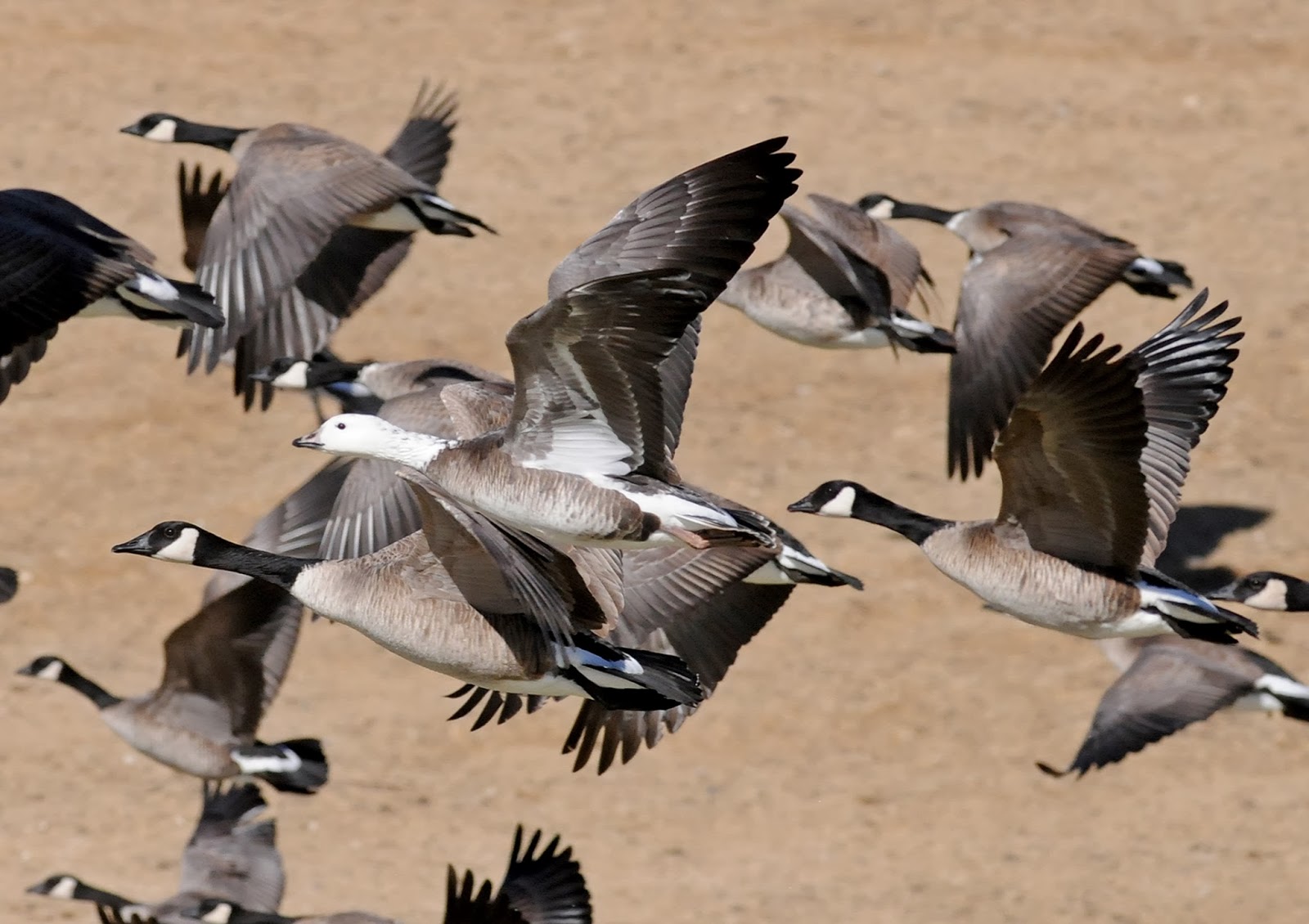 
The next one is also tiny, with a very small bill lacking any grin patch. 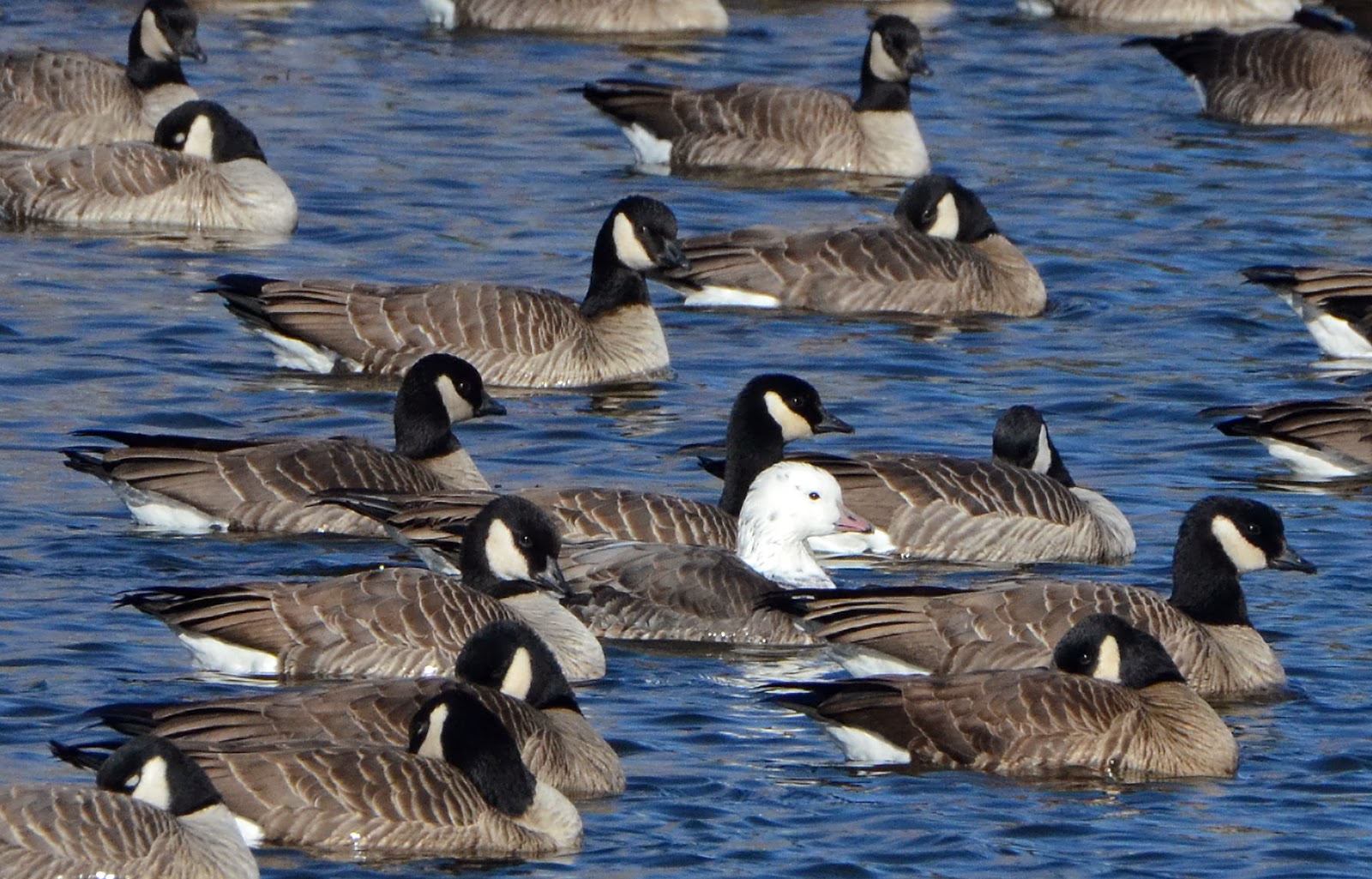 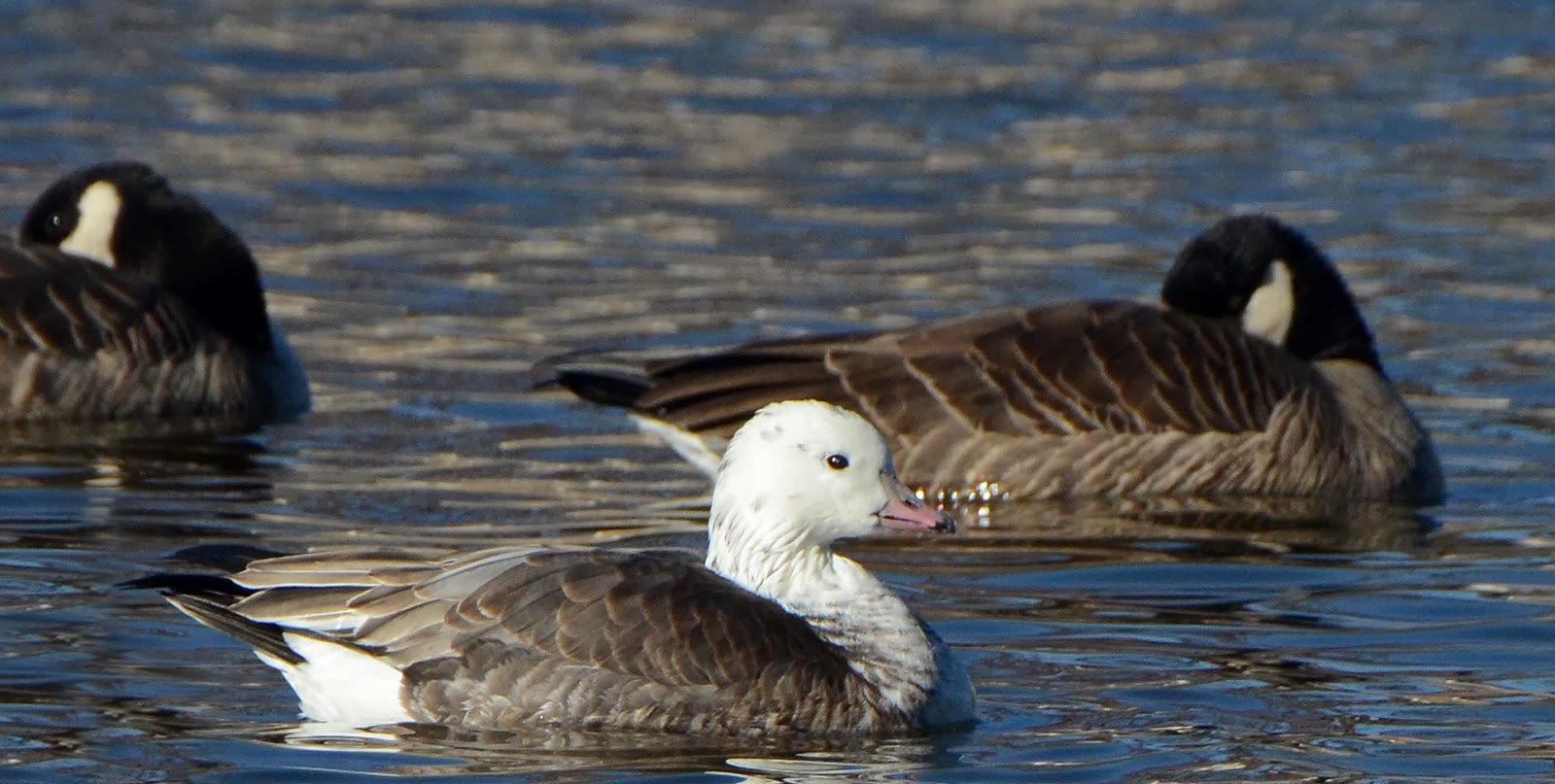 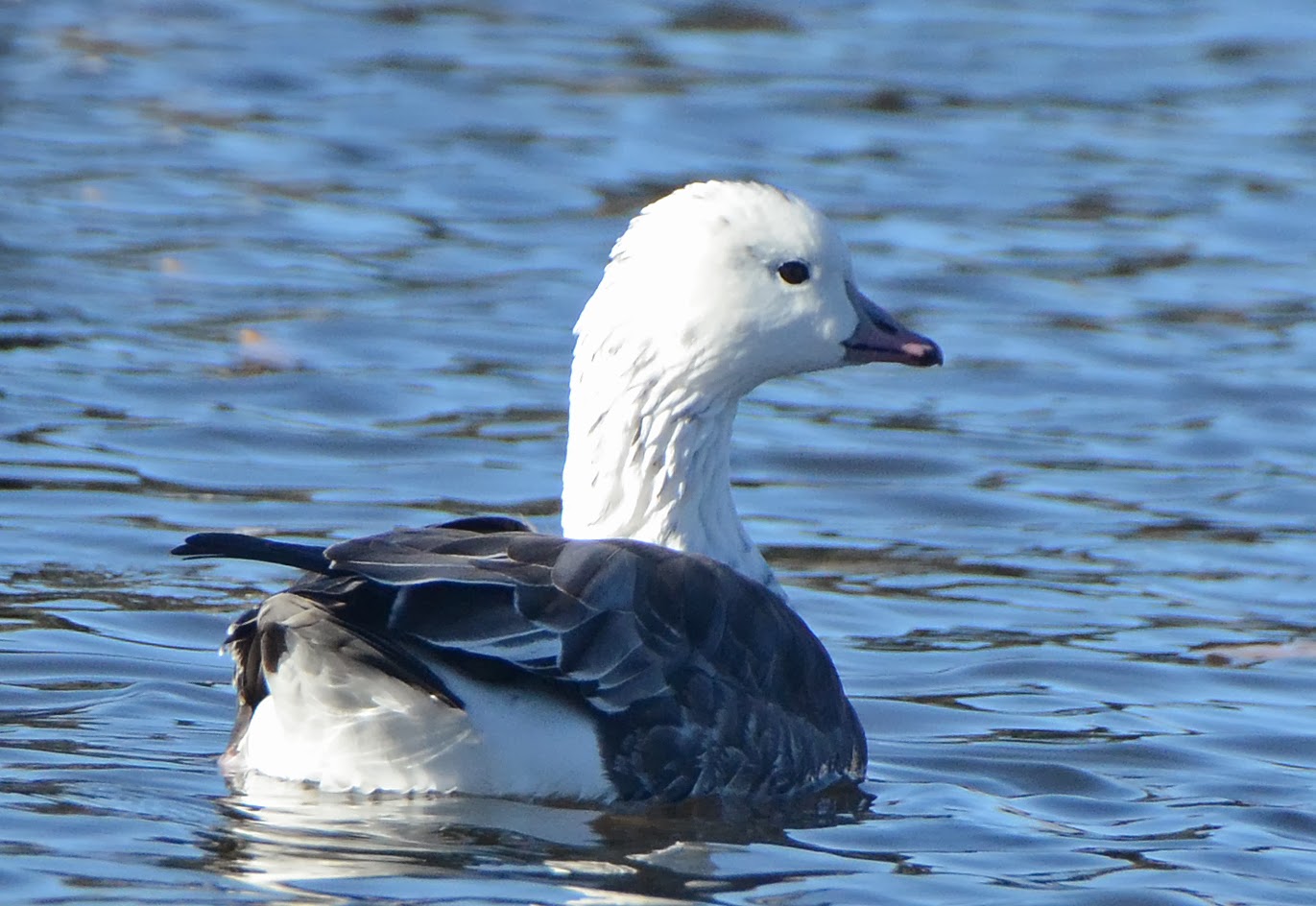 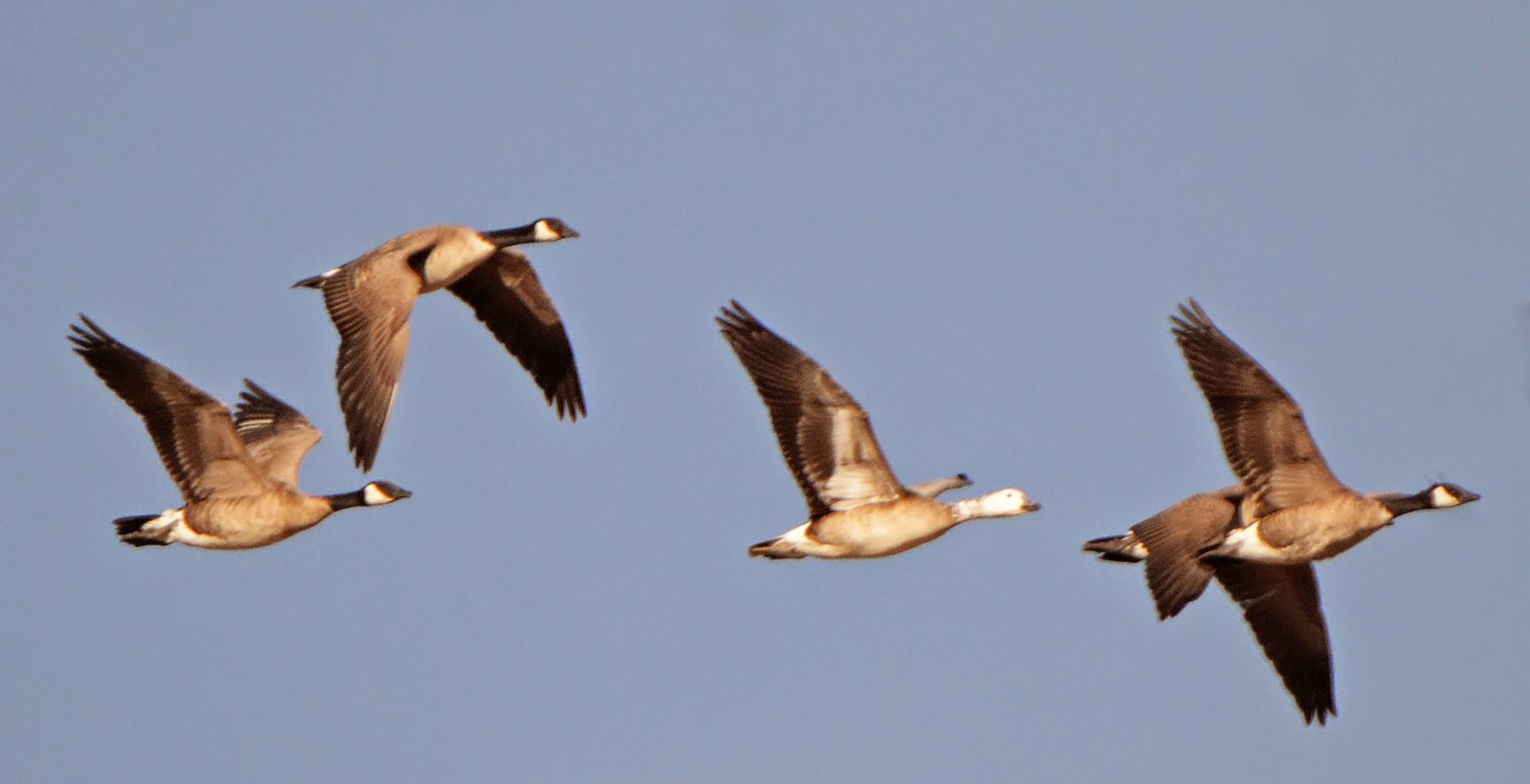 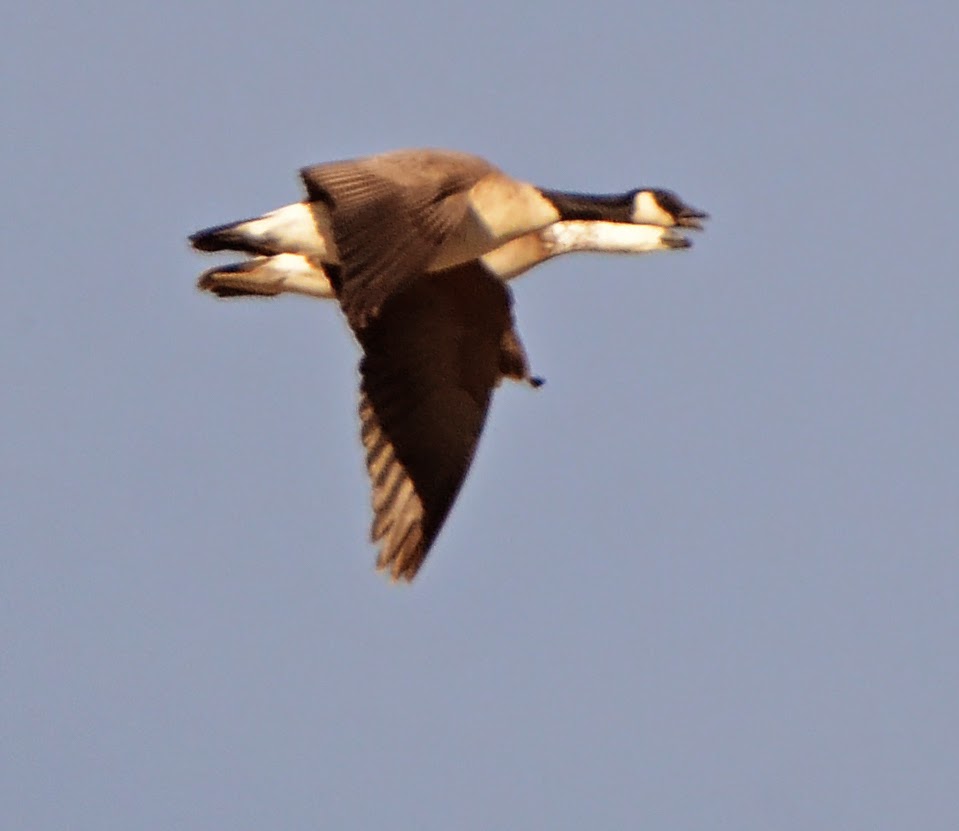 
Steve says that the next bird, smaller than nearby Cacklers with a tiny bill, is pretty clearly a Ross's x Cackling Goose: 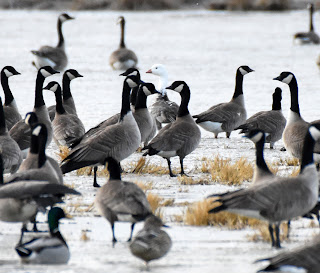 
Steve describes these as "especially cute, with round heads and dinky bills."  Yes, I suppose they are cute... 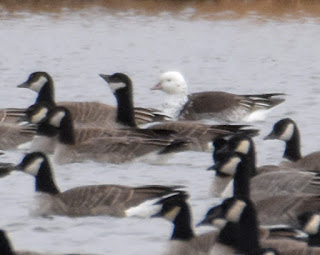