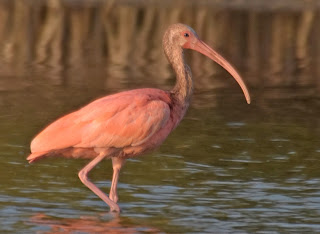 
Steve tells us that this hybrid isn't at all rare in some colonies in northern Venezuela and Columbia leading some to speculate that Scarlet and White Ibises are colour morphs of the same species.  In an article in Colonial Waterbirds 10.1 111-114, Cristina Ramo and Benjamin Busto document 40 mixed pairs and 14 mixed copulations in the Venezuelan Llanos and proposed that they should be treated as different subspecies of one species.  But whether they are colour morphs, different subspecies or different species, most if not all of the main taxonomic authorities are still treating them as separate species at the moment.

It is reported that captive Scarlet Ibises receiving inadequate levels of β-keratin in their diet turn pink, and such birds may be difficult to distinguish from hybrids (see The Chat 53: 90-91 for example).  If anyone has any information on how they may be differentiated, please get in touch.

In Aruba neither species is common.  Steve tells us that Scarlet Ibis has been nearly annual during the last 5 years, with 2-3 birds involved. This is the first hybrid.  A White Ibis with an abnormally dark bill turned up the day after the hybrid - here they are together: 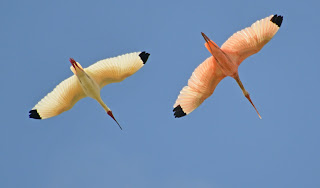 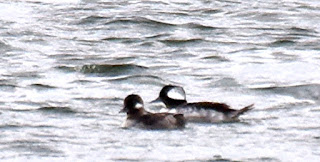 
Steve notes that that there is a bit of a crest, which changes in shape over time as the bird assumes different attitudes.  The white on the head is also oriented more towards rear than top.  The bill and tail are longer than those of a Bufflehead, with the entire bird being a bit larger as well. 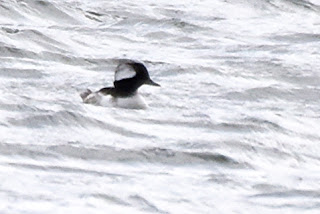 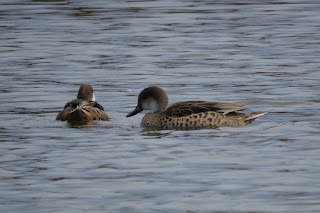 
The White-cheeked Pintail influence in this bird is fairly obvious but for me the other parent wasn't so clear.  Thanks to Joern for pointing us to the correct ID. 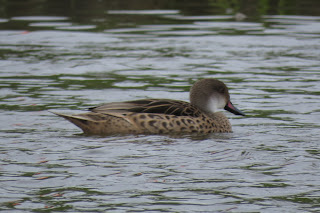