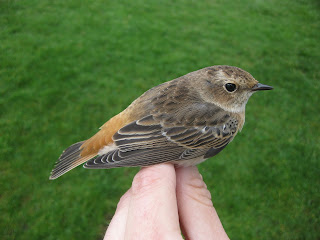 
This amazing bird was trapped at Lista Bird Observatory during a heavy passage of Common Redstarts.  Fortunately the bird's handlers had the good sense to obtain a DNA sample and this was duly analysed, confirming that it is a male hybrid, the product of a male Common Redstart and a female Whinchat.  Perhaps surprisingly, this is the first recorded example of an intergeneric hybrid within the extensive family Muscicapidae.

In many respects the bird resembled Whinchat more closely than Redstart but the extent of red on the tail and rump was a clue to its hybrid identity.  There is an account of this occurrence on the Lista Bird Observatory website and the molecular analysis is documented in, "Intergeneric hybridization between Common Redstart Phoenicurus phoenicurus and Whinchat Saxicola rubetra revealed by molecular analyses" by Silje Hogner, Albert Burgas Riera, Margrethe Wold, Jan T. Lifjeld, Arild Johnsen, in Journal of Ornithology 156.3: 829-836 (2015). 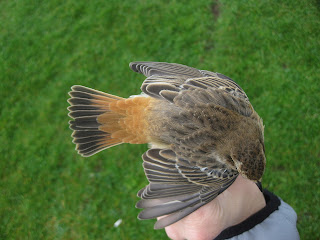