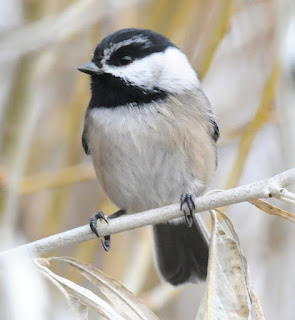 
The first bird shown here prompted a good discussion when one enquirer wondered why it couldn't simply be a Mountain Chickadee.  One thing that came up is the question of the narrow supercilium, and whether or not this can be matched by pure Mountain Chickadee.  It seems that it probably can when the plumage is worn, but that should not be the case for this individual.  Another feature that is contra Mountain Chickadee is the strength of the buff wash on the flanks.  Cathy also pointed out another feature supporting the hybrid identification - on pure Mountain Chickadee, even worn birds with narrow supercilia, the supercilia meet, or very nearly meet, above the bill.  As you can see on the head-on shot, on this bird the black crown comes right down to the bill, broadly dividing the white. 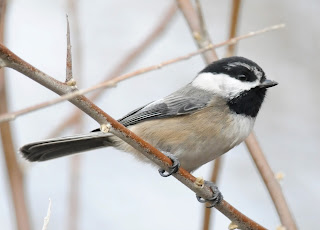 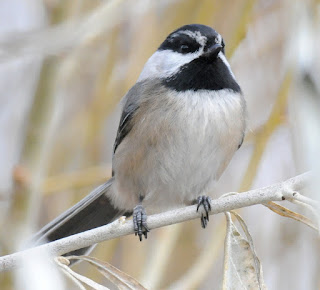 
The next bird was found by Christian Nunes in a flock of Black-capped Chickadees and one Mountain Chickadee, which is locally rather uncommon.  Steve describes its features: 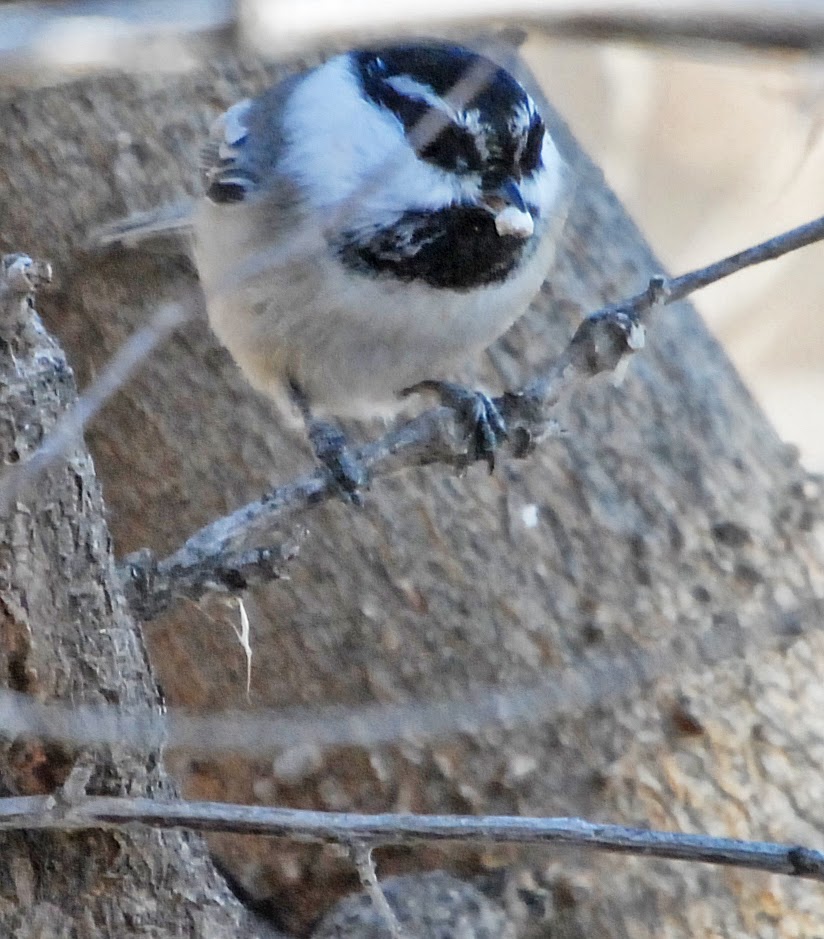 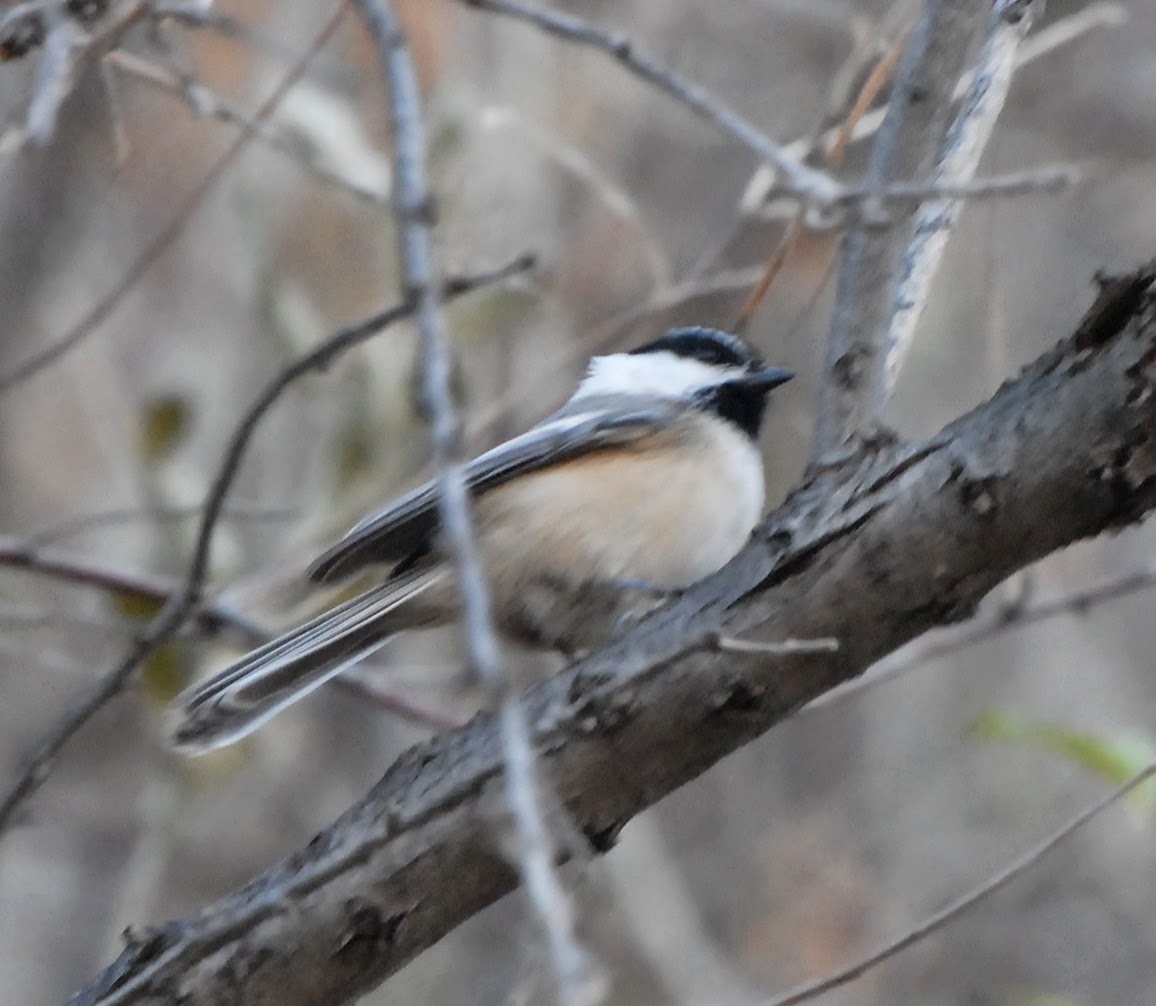 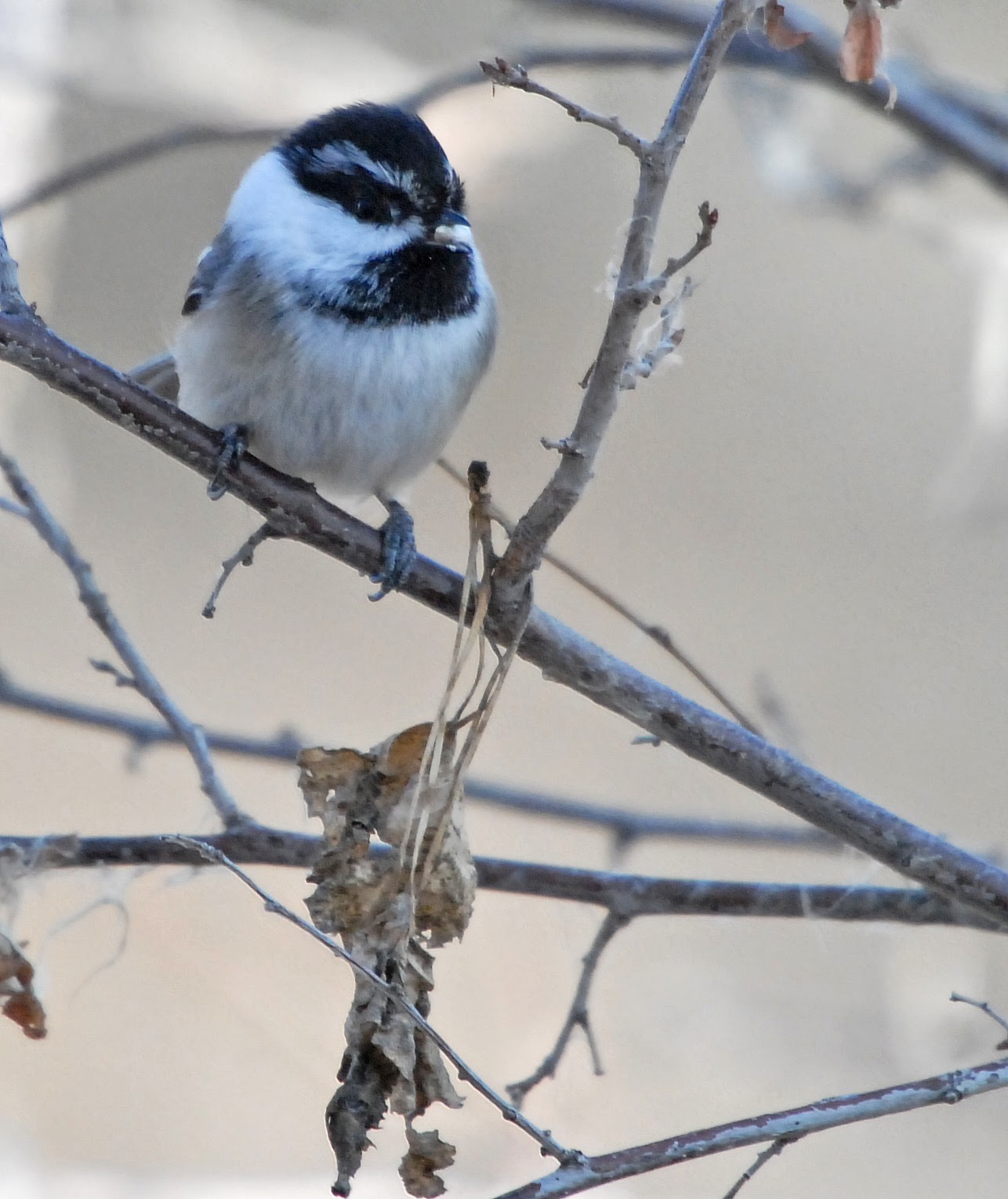 
Steve tells us that the next one was unlike any presumed Black-capped x Mountain Chickadee F1 hybrids he had seen before.  He explains why he nevertheless believes it is such a hybrid:


"Mountain Chickadee traits can be seen in the narrow white supercilium AND the way the white of the cheek curves up in front of the eye (like a Mountain, but not like a Black-capped Chickadee.  And yes, though the photos all show white over the right eye, such existed over the left eye as well.  When Sean Walters and I first saw this bird a few days prior, the larger and more ragged black throat was also evident, not appreciable in these photos." 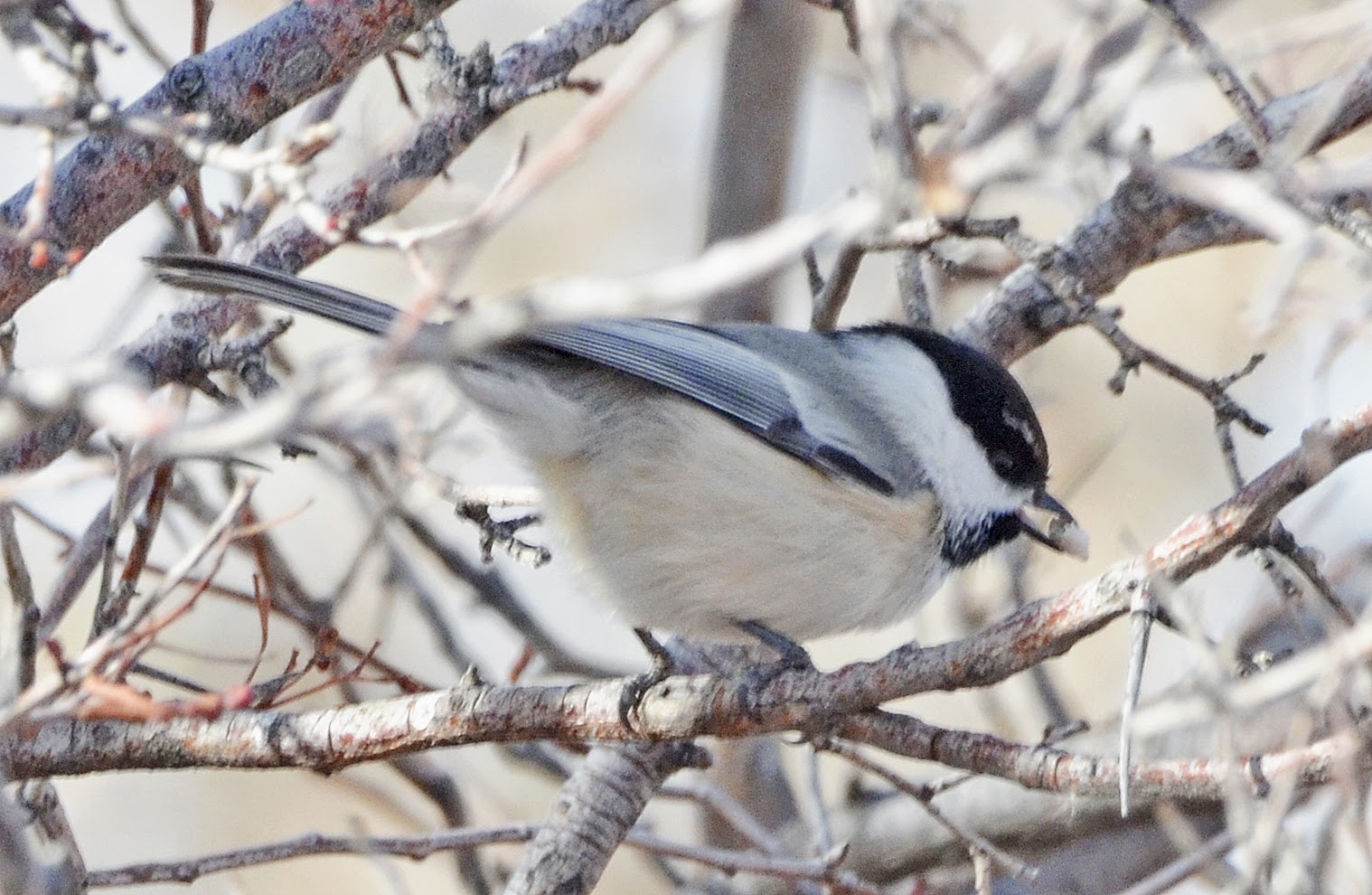 
Another one from the same location (or is it the same bird?) was equally difficult.  Cathy wondered if it could be just an aberrant Black-capped Chickadee with extra white feathers above the eye, or perhaps an F2 Black-capped x Mountain Chickadee hybrid.


"It seemed to have a different shape to the white pattern on the face than most of the Black-capped Chickadee with the white coming up slightly in front of the eye and curving up a bit more in the back as well.  Feather edging seemed darker than most Black-capped Chickadee and the sides also seemed more pale (not as buff) than the other Black-caps, but in general this bird's feathers were quite worn looking so not sure this can tell us anything."

Steve is confident this bird was indeed a hybrid, noting that other photos show that it had a more extensive black throat than Black-capped Chickadee. 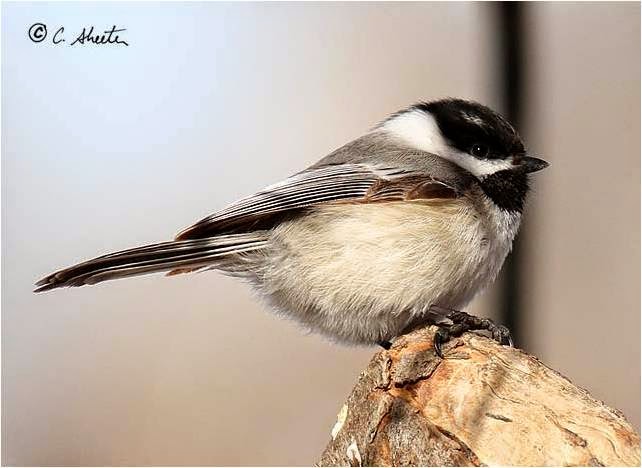 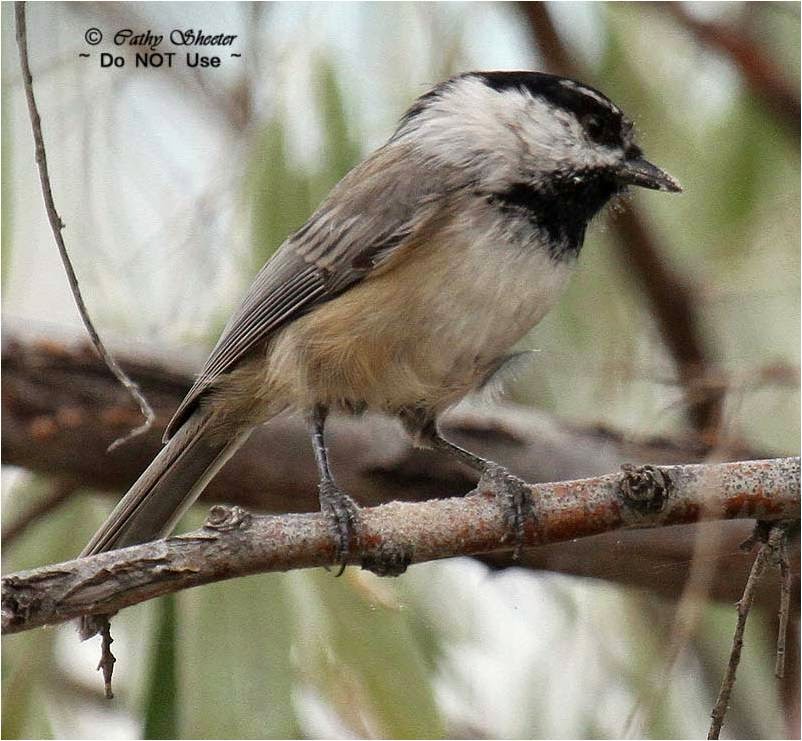 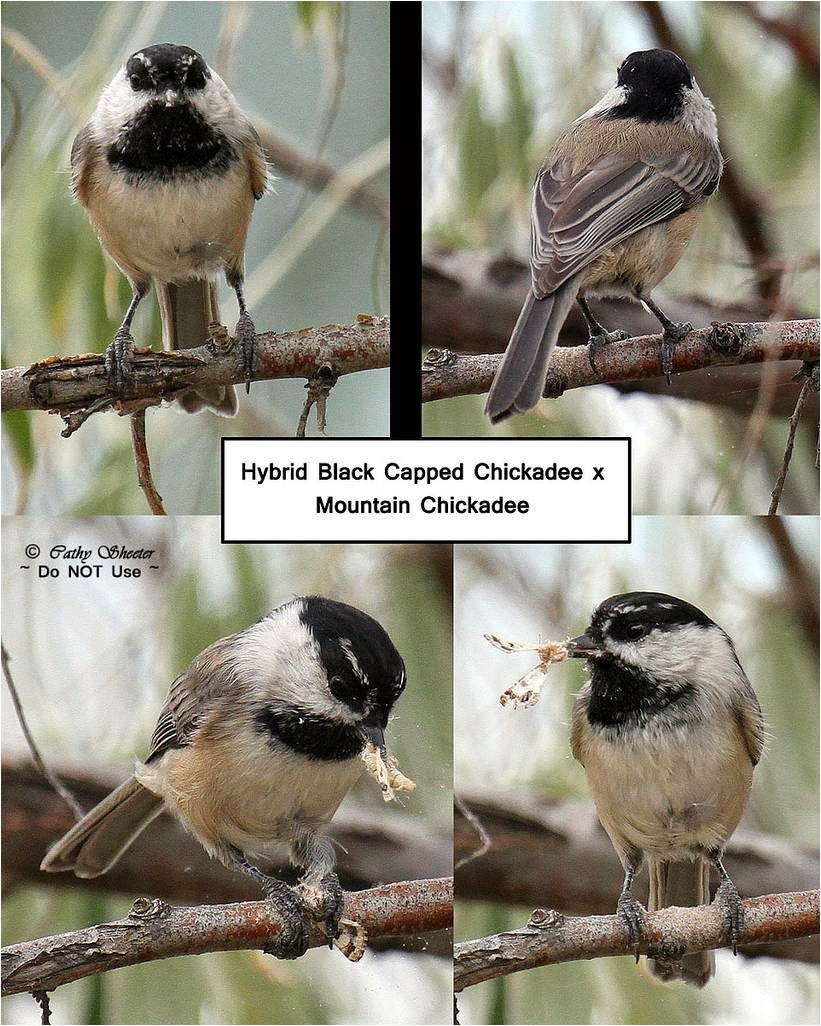 
Chris tells us that the next bird called like a typical Black-capped Chickadee (he heard only 1-2 samples of one type of call). Black-capped Chickadees are common in the Okanagan Valley where Vernon is located; Mountain Chickadee slightly less so but Chris says it's not unusual to see both species in a morning of birding.  They are not separated by altitude here since Mountains occur all the way to the valley floor and Black-caps can be found in deciduous growth near the tops of 5000+ foot mountains.  Chris described it as a hybrid or maybe a Black-capped Chickadee wearing a rare variant plumage.  The latter is often difficult to eliminate with absolute certainty, but as some of the other examples above demonstrate, hybrids do occur and that therefore seems to be a much more likely explanation for its unusual appearance. 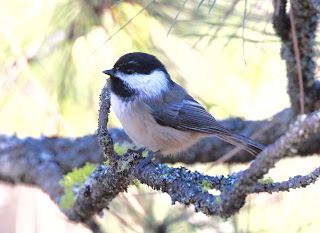