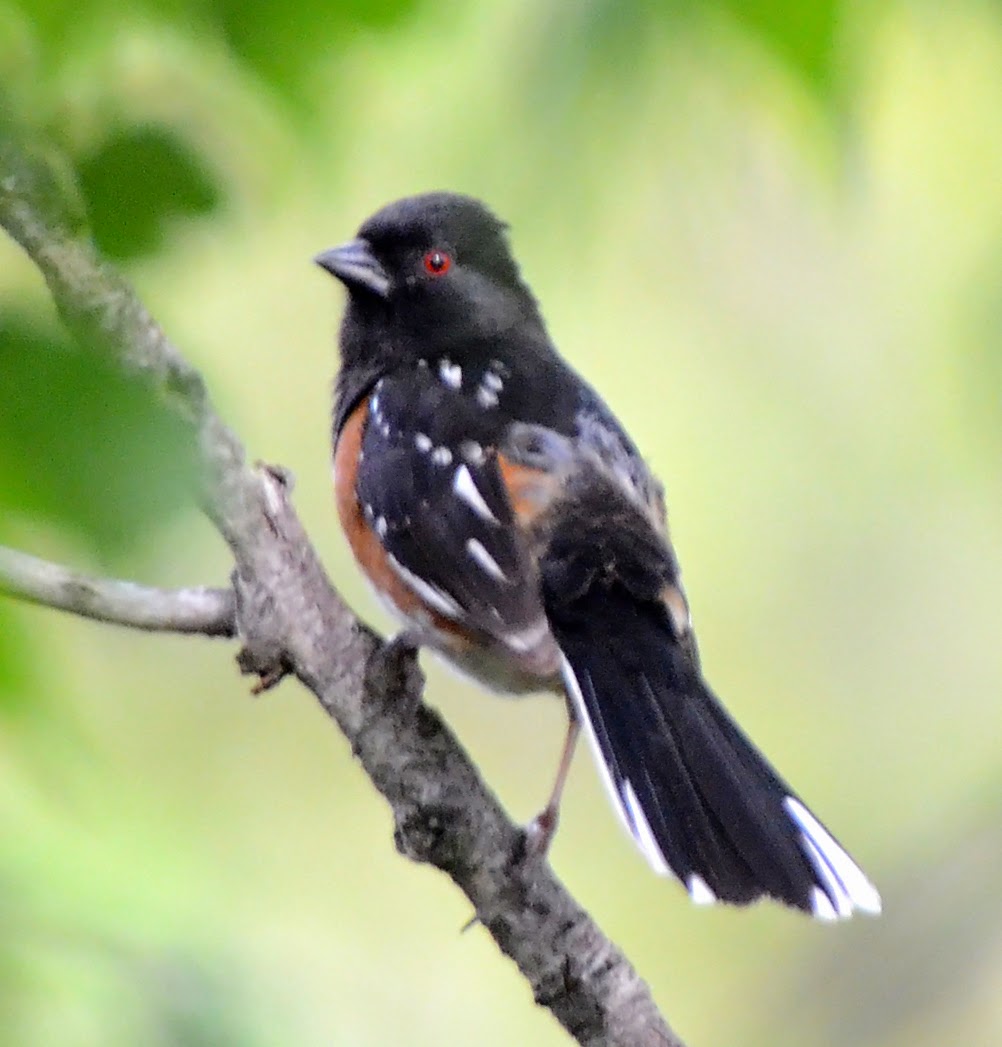 
Tamarack Ranch is evidently a great place to see hybrids between the eastern and western forms of what was once treated as a single species, Rufous-sided Towhee.  On the occasion Steve took these first photos he identified 2 Spotted Towhees, 1 Eastern Towhee and 9 hybrids.  This individual called more like Spotted Towhee but sang more like Eastern Towhee. 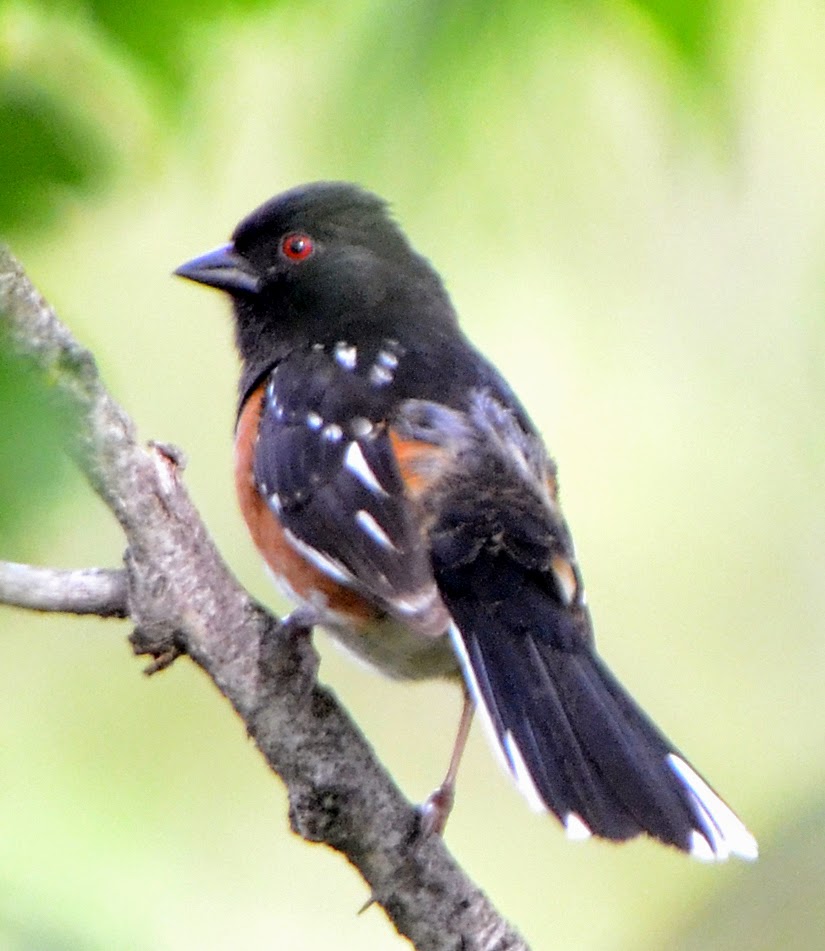 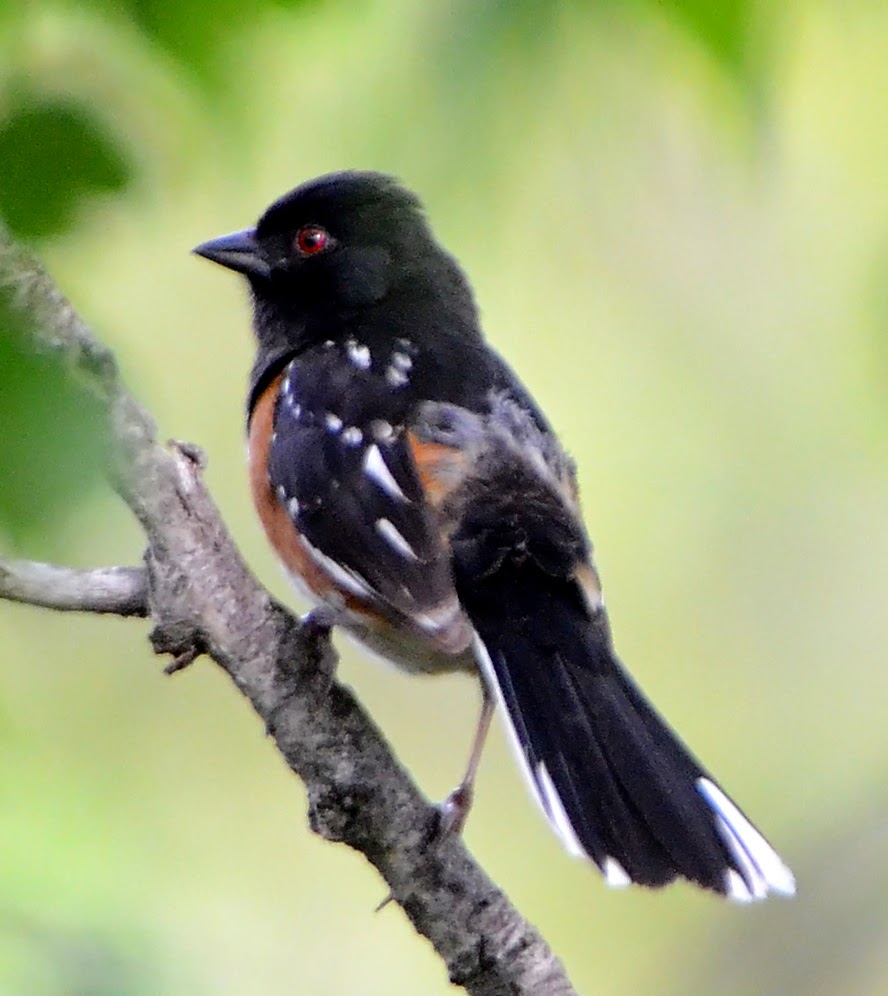 
Steve says the next bird's call was mostly like that of a Spotted Towhee.  Its undertail spots were exceptionally long, like those of the arcticus race of Spotted Towhee, substantially longer than the subspecies montanus which is more common locally (Steve points out that Eastern Towhees also have very long white undertail spots).  Seeing the long undertail spots, Steve expected to see the pronounced spangling above typical of arcticus Spotted Towhee, but instead there were three or so spots on the scapulars, and no other spots except those on the wings.  The wings showed both the spotting of a Spotted Towhee and the white "box" at the base of the folded primaries. 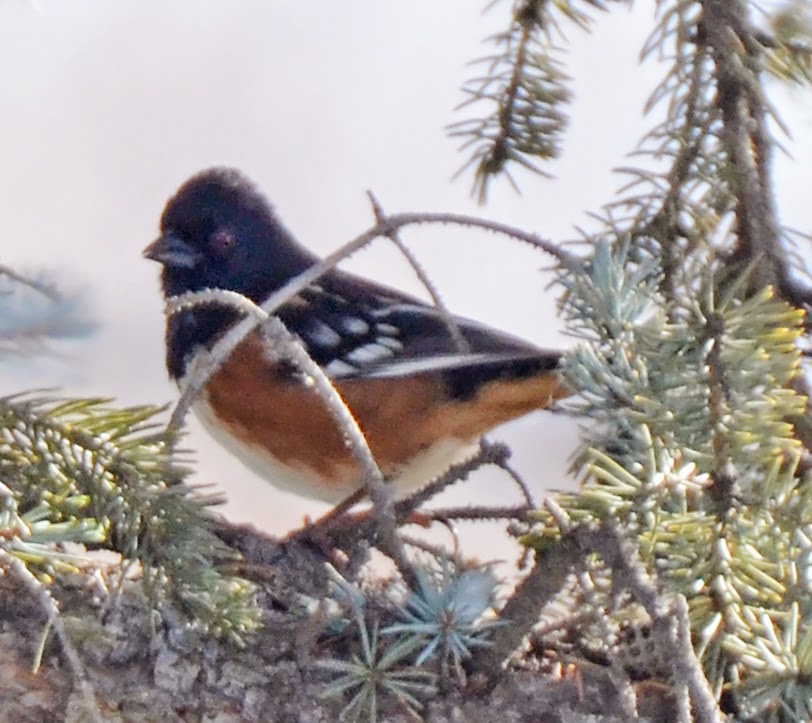 
Next up is another from Tamarack, which Steve describes as the "towhee hybrid epicenter in Colorado".  The Eastern Towhee like colouration can be seen as well as intermediate spotting on the wings and apparent lack of spotting on some of the scapulars. 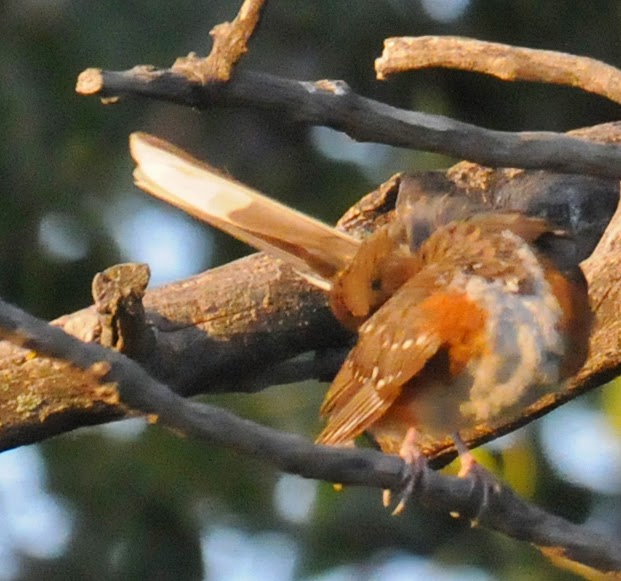 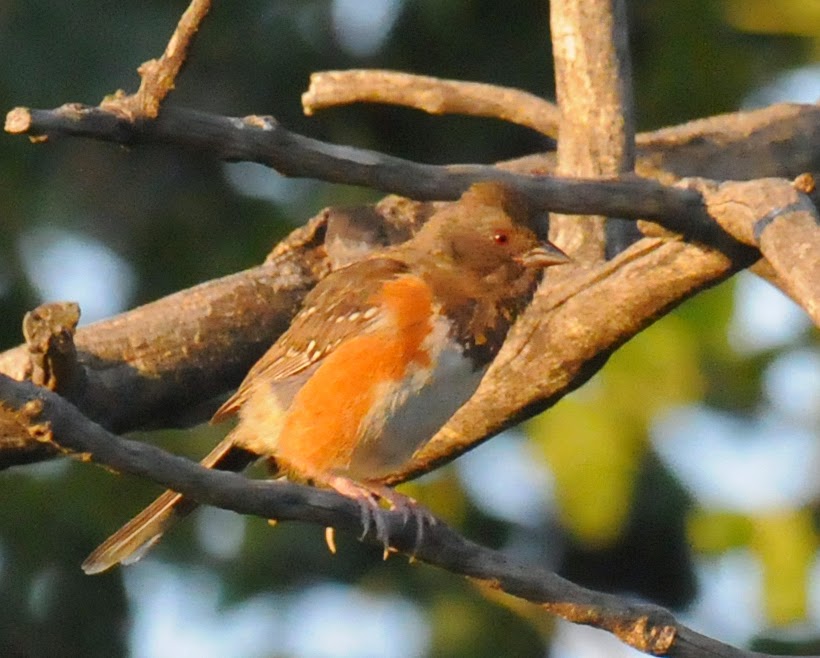 
Steve writes about the next hybrid, 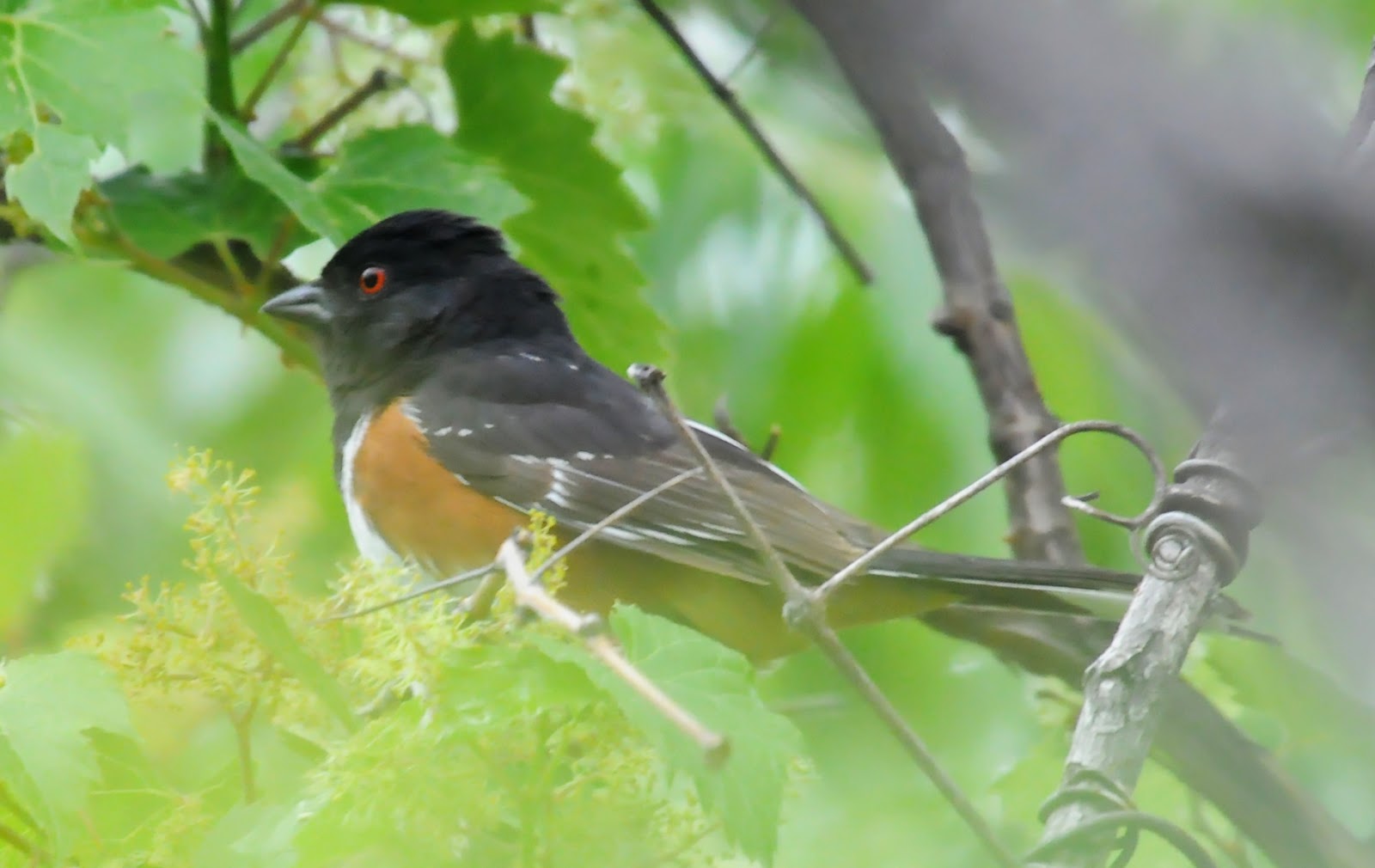 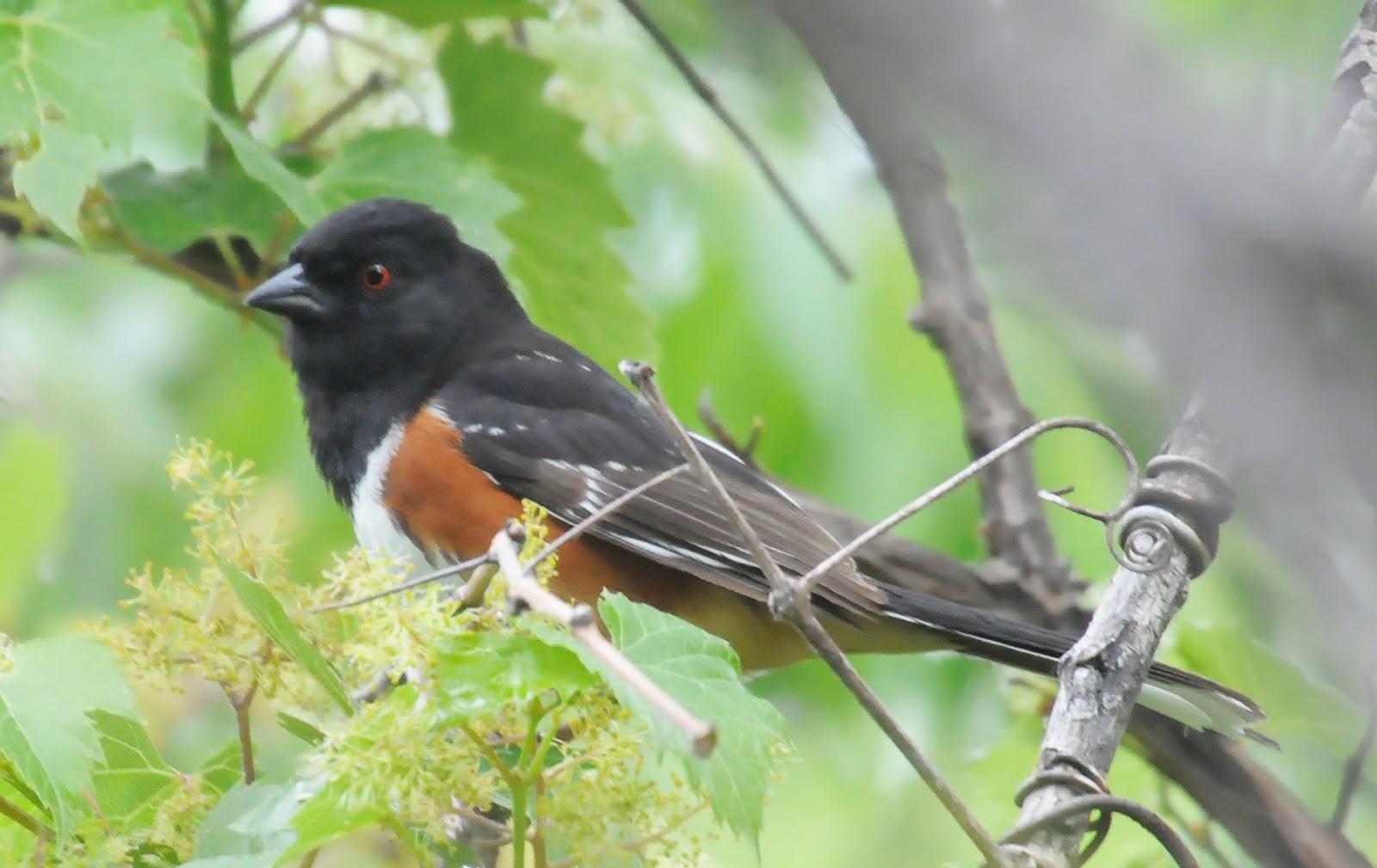 
The next bird at the same place on the same day is similar, and Steve's notes on the last one apply equally to this bird: 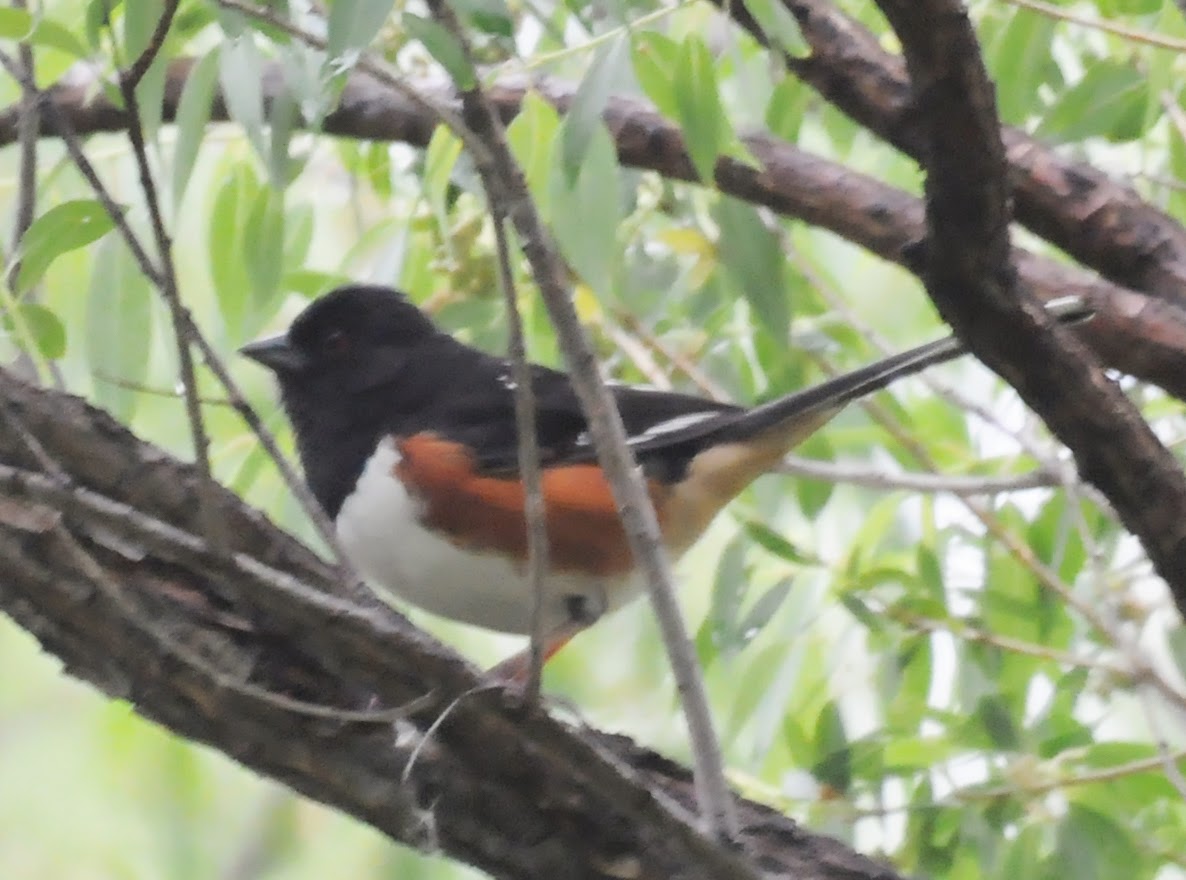 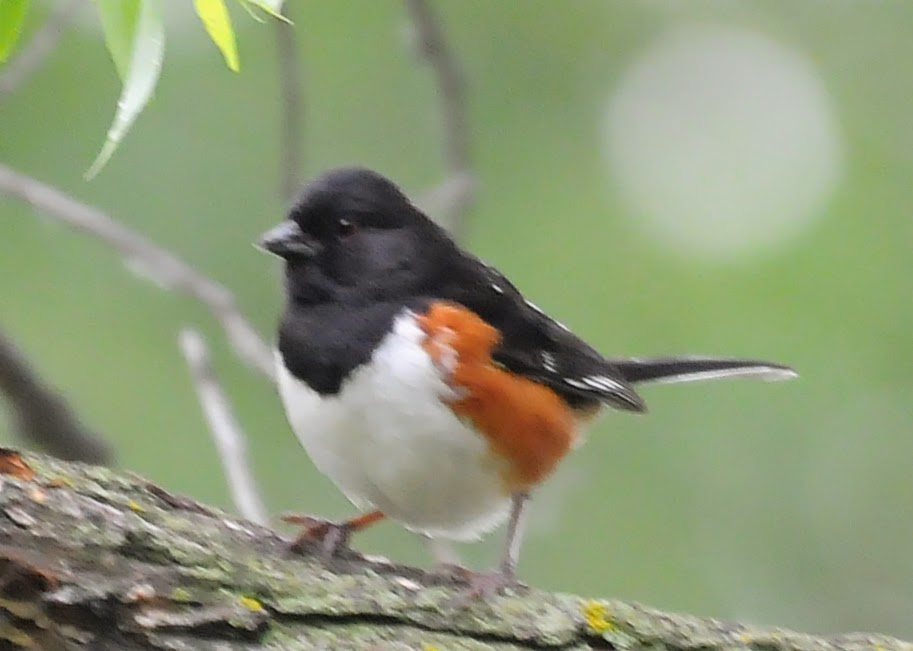 
Steve describes the next one as a "stealth hybrid":


"One would have a hard time separating this bird (in these two photos) from an Eastern Towhee by sight alone, except, perhaps, by the relatively weak white square at base of primaries.  However, it was in an area dominated by Spotted Towhees (with at least one other hybrid present), and the Eastern Towhee present will provide Colorado's first summer record, if accepted.  This bird's likely hybrid nature is based on its largely Eastern Towhee appearance and its largely Spotted Towhee song, with ID influenced a bit by location as well." 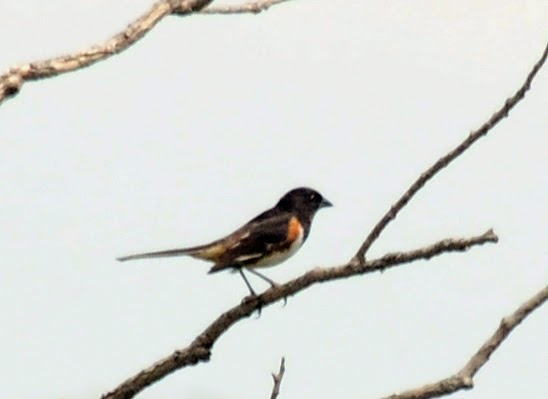 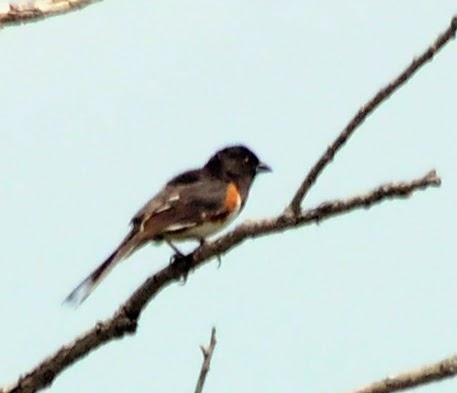 
And yet another from Tamarack.  Steve writes:


"Note that this bird has a couple tiny white spots on scapulars as well as on tips of wing coverts.  The white tail spots (barely visible) are reduced compared with those of Eastern Towhee.  Many of the hybrids at Tamarack more closely resemble Eastern vs. Spotted Towhee, though most of the pure birds are Spotted Towhees, not Eastern.  Notably, until this visit, I'd not seen an arcticus Spotted Towhee at Tamarack.  Our "normal" Spotted Towhees (subsp. montanus) have smaller spots above than does arcticus and smaller tail spots as well.  Thus, a montanus x Eastern will look less spotted above but will also have smaller tail spots than an arcticus x Eastern." 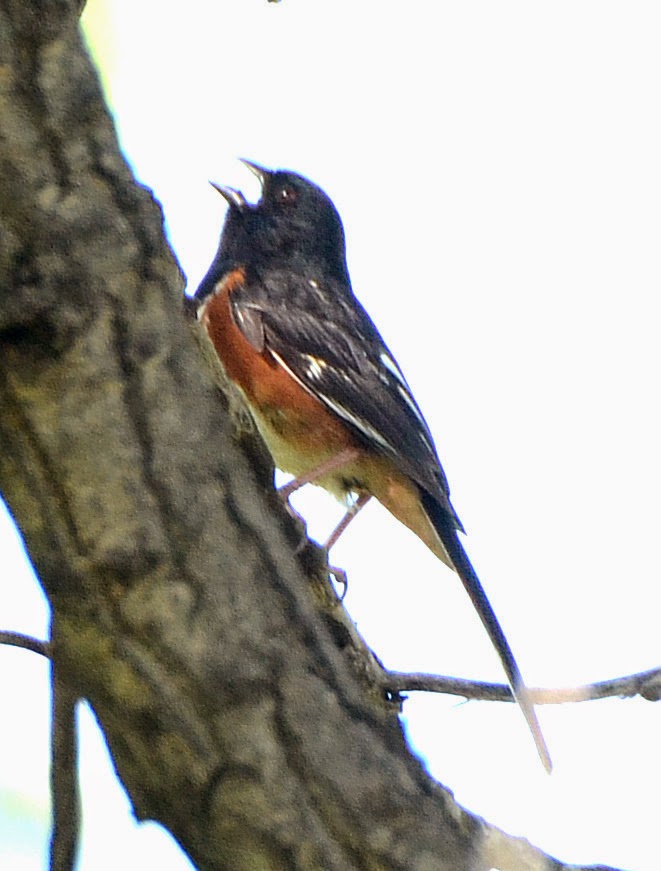 
Steve says the next one was one of 7 hybrid towhees present.  Also present were 4  montanus race Spotted Towhees (the common subspecies in Colorado), and 2 arcticus (Great Plains race), which is uncommon during migration/winter in Colorado and is not known to breed, but probably does so in small numbers on the Platte. 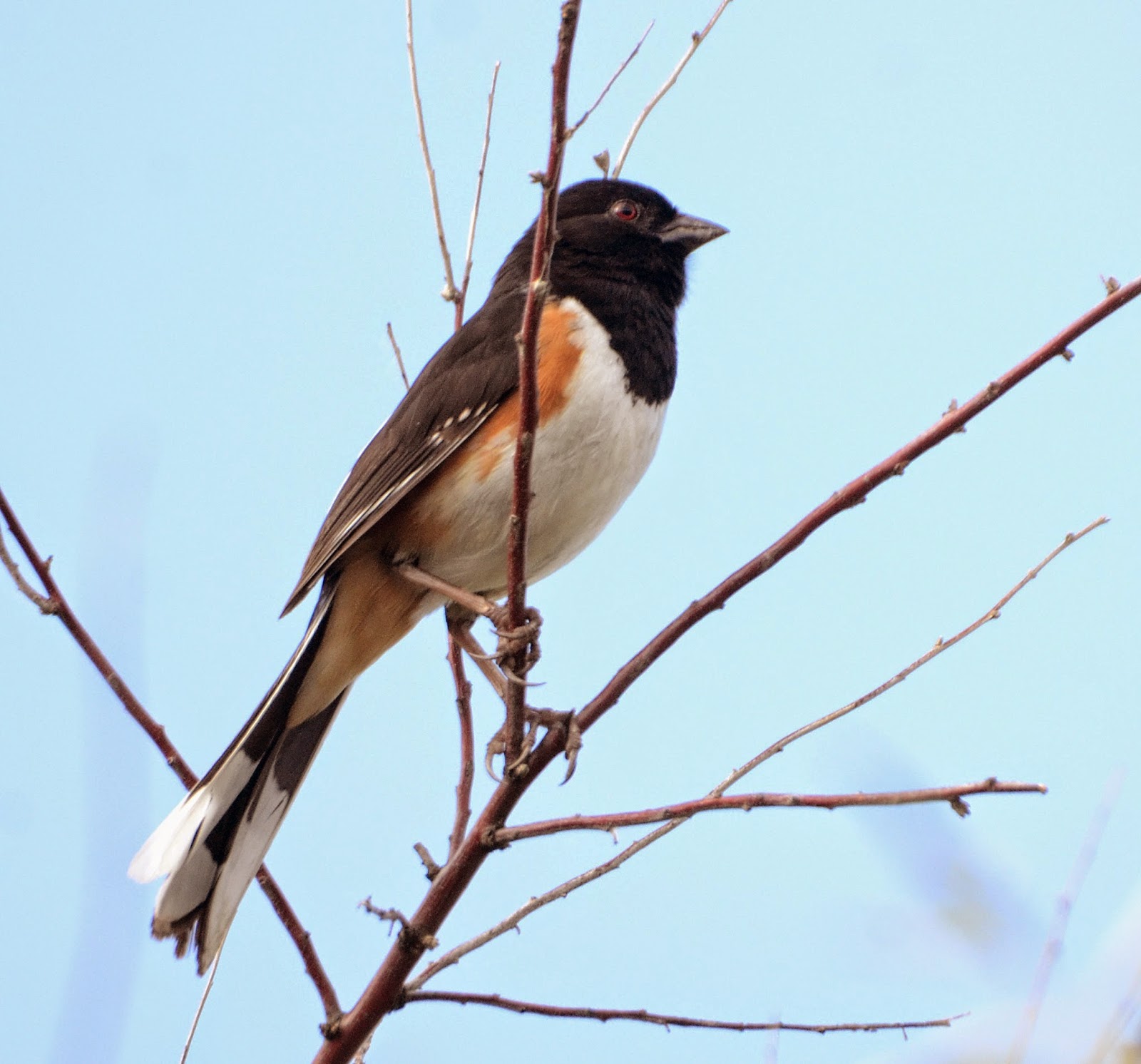 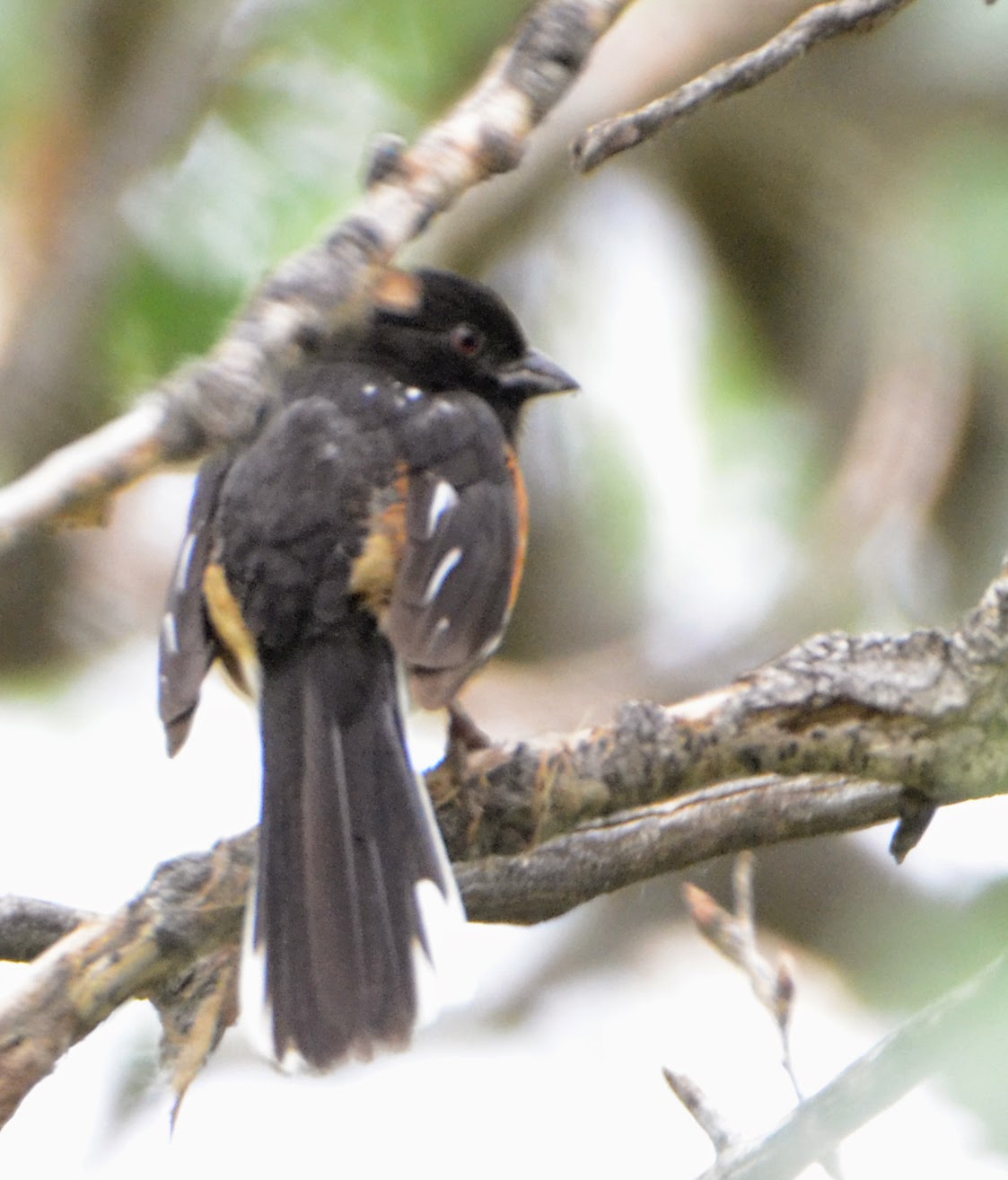 
Here is Steve's commentary on the next one:


"Note the very limited markings on scapulars and back, even tertial tips.  The tail spots (not visible here) were rather large, not what one would expect in the lesser spotted Spotted Towhees such as montanus/curtatus or oreganus.  However, Eastern Towhee has large tail spots as does arcticus, the Great Plains subspecies of Spotted Towhee." 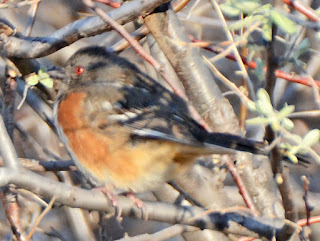 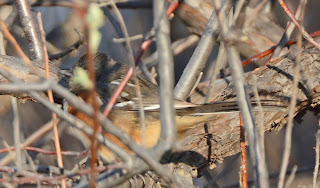 
On the next, Steve says:


"One of two present.  Neither [species of] towhee is known to breed at Prewitt, though it certainly does breed at scattered locations along the nearby S Platte River (where, just to the east in Logan County, many of the towhees are hybrids).  Note the limited spotting above and the weak "box" at the base of the primaries.  Also, the rounded head and relatively small bill resembles an Eastern Towhee more so than a Spotted.  The call was like that of a Spotted, the song somewhat intermediate, though more Spotted like." 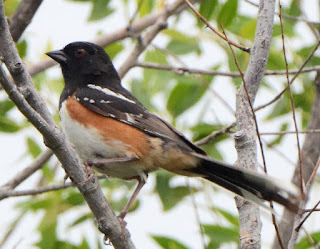 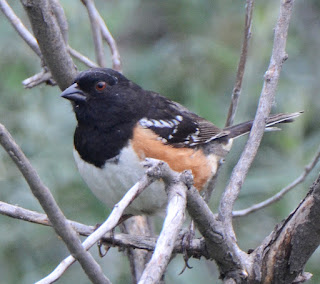 
Steve's commentary on the next one is:


"This bird, visually, is very much like an Eastern Towhee, excepting 1) the white dots at the greater wing-covert tips and 2) the weak white square (instead of a distinct square) at the base of the folded primaries. However, the bird called and sang like a typical Spotted Towhee (to my ear; maybe a spectrogram could detect some Eastern Towhee influence)." 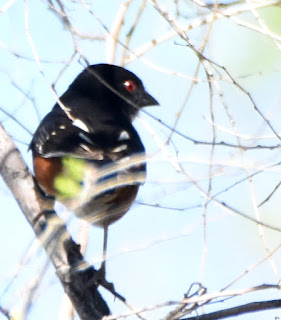 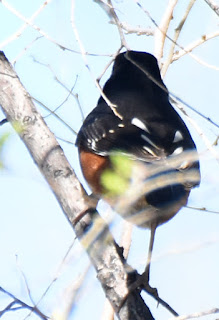 
The next bird occurred in the east, well away from the main zone of hybridisation.  However a vagrant Spotted Towhee had been present very close to this location in 2006 and Joel wondered if this bird might be a descendent.  The pale tips to the greater coverts seem to be the only feature unexpected on Eastern Towhee so if it were a hybrid then a bird backcrossed to Eastern Towhee, maybe through more than one generation, would seem the best explanation.  However this identification depends on whether pure Eastern Towhee can ever show white tips to the greater coverts, something I was not qualified to answer.  So I contacted Steve who has lots of experience with hybrids (many of them shown here), and his response was that he would label it a hybrid "backcrossed ? times".

Joel reports back to me that the eBird reviewers have not accepted its designation as a hybrid - presumably they think that pure Eastern Towhees can sometimes show white greater covert tips.  Joel has since found a paper on Hybridisation in the Rufous-sided Towhees of the Great Plains in Auk 76: 326-338 in which Charles Sibley and David West state, "In this connection it should not be forgotten that individuals of the eastern populations are also frequently spotted with white on the back and wing cover".  I wonder how firmly it has been established that such white spotting in Eastern Towhees is part of normal variation in the pure taxon and not a result of genetic introgression? 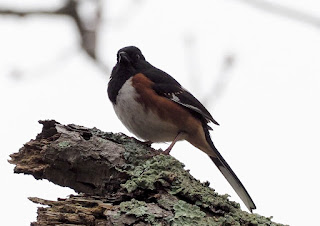 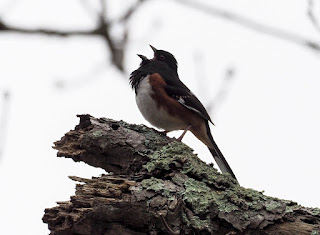