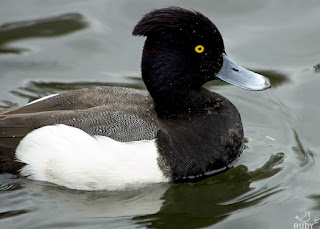 
It seems pretty clear that this bird is a Tufted Duck x Scaup sp. hybrid but whether Greater or Lesser Scaup is involved is not so straightforward.  The coarseness of the vermiculations on the upperpart is different from at least some Tufted Duck x Greater Scaup hybrids and I think that is very likely to point to Lesser Scaup parentage.  In the two photos (above and below) the darkness of the upperparts looks different - that is often true in Tufted Duck x Scaup sp. hybrids, varying according to light and angle to the observer. 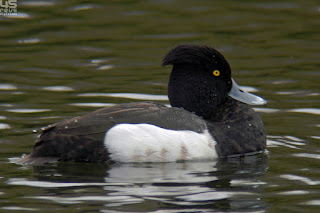 
Tufted Duck x Lesser Scaup was the suggested ID for the following bird on the other side of the Atlantic (Tufted Ducks are vagrants among Lesser Scaup in North America while Lesser Scaups are vagrants among Tufted Ducks in Europe, so the hybrid is just as likely to occur on either continent).  The identification of this bird was discussed but I couldn't see that any clear conclusions were reached - as always, comments welcome.  There is also a video of this bird on YouTube. 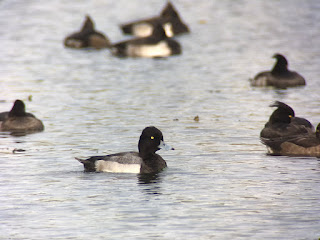