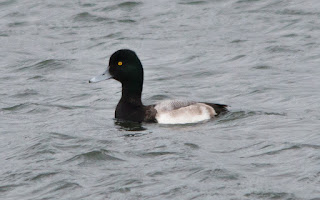 
This is a difficult bird!  I've included it under the two-Scaup heading but I'm by no means sure that is the correct ID, and acknowledge that others are leaning more towards a hybrid involving Tufted Duck (e.g. on Andrew Harrop's excellent blog), while others suspect it could be a pure Lesser Scaup.  Andy tells us that the pale subterminal band on the bill was more obvious in life than it is in the photos (more of which appear below) - and that is one good reason to consider Tufted Duck as a parent.  Many Tufted Duck x Scaup hybrids show more black on the tip of the bill, but apparently some don't, so that is not a strong enough reason to eliminate Tufted Duck from the equation.  Of more concern to me is the paleness of the back.  Typical Scaup x Tufted Duck has a much darker back lacking such coarse vermiculations as shown by this bird.  Again this does seem to be a variable feature on Tufted Duck x Scaup hybrids, however I have yet to see clear evidence that any Tufted Duck hybrid can show such a pale back as this.  A hybrid backcrossed with Scaup would be another matter, and that must remain a possibility for this bird (though a backcross to Lesser Scaup is surely beyond the bounds of reasonable possibility in the UK?).

The coarseness of the vermiculations suggest (to me at least) Lesser Scaup involvement, and indeed the bird looks a lot like a Lesser Scaup in many respects.  Andy tells me that in the field pure Lesser Scaup was never really a contender, but from the photos I think it would be a very easy conclusion to reach.  For Andy though, he saw it flap its wings twice and observed that the white bar definitely extended across the primaries as in Greater Scaup or Tufted Duck, and of course wrong for pure Lesser Scaup.


"It was at least Tufted Duck size, perhaps slightly larger, and the head shape was nearer Greater Scaup, but usually with an obvious peak on the rear crown (really just a 'rough' patch of feathers interrupting the smooth curve). Also the head was strongly glossed green at all times, with just a hint of purple when seen head-on."

Worth noting that the new Helm guide to Wildfowl of Europe, Asia and North America by Sébastien Reeber has two Tufted Duck x Greater Scaup hybrids illustrated (one head only), one showing restricted black on the bill tip.  Both show a more obvious tuft than the Eyebrook bird had.  If they are the same birds illustrated in his 2002 article "Identification des fuligules et de leurs hybrides" (Ornithos 9: 177-209) then they were both darker-backed birds too.  Gillham & Gillham (Hybrid Ducks - a contribution towards an inventory, 1996) describe two male Tufted Duck x Greater Scaup hybrids as having bodies like Greater Scaup, but they suggest that these birds, which also had rounded heads and were as large as Greater Scaup) might have been backcrossed with Greater Scaup. 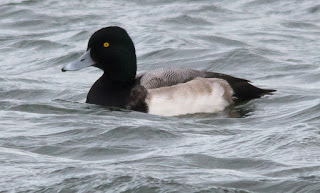 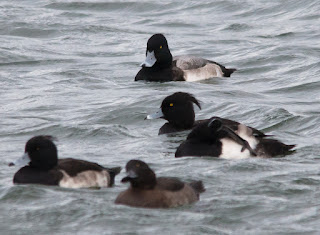 
My first thought when I saw these photos was, "Why isn't this a Lesser Scaup?", so I was interested to receive an email from Steve Mlodinow, one of North America's leading birders and with a great deal of experience identifying hybrids, asking just that, or at least, "Besides the green on the head, why is not this a Lesser Scaup?" A green head sheen isn't enough to discount Lesser Scaup - I've personally seen green-headed birds in both UK & America, albeit eventually they showed purple under prolonged observation.  Steve went on to say,


"The head shape and bill are well within range for [Lesser Scaup], and I don't really see that bill coming out of a Greater Scaup x Tufted Duck hybrid... though I've not looked at known photos of that cross.  Ring-necked Duck x Scaup hybrids have far darker backs than this bird, and I would expect Tufted Duck x Greater Scaup to be similar."

So it seems Steve's interpretation of the photos is akin to mine.  But of course the answer to, "Why not a Lesser Scaup?" has to do with Andy's observations, rather than anything that is clearly visible in the photos.  Having said that, my own observations of both live birds and photos suggest that the wing-bar feature can be difficult to apply in poor or brief views (or imperfect photos).  Steve echoed these sentiments: "Depending on lighting, the wingstripe can be deceiving." But of course neither I nor Steve actually saw the bird, whereas Andy did, and asides from noting the possibility of error in recording wing-bar pattern in a general sense, we are in no position to question Andy's observations.  And it's worth remembering too that Andy thought the bill pattern did not look right for Lesser Scaup in life, showing too pale a subterminal mark.

Well, I shared this feedback with Andy and he's kindly supplied some more photos taken a few days earlier when the bird was more distant.  Here's what he said,


"The photos I sent might be misleading as regards the head shape, because in the field it really didn't suggest Lesser at all.  The attached three heavily cropped images were taken when I first saw the bird the week before, but much further away, and I think give a truer idea of the bird's usual head shape - much more evenly rounded and Greater Scaup-like.  I think if those were the only photos I'd got, no-one would even be mentioning Lesser as a possibility!

This is definitely the same bird, by the way - in the field I noted the occasional appearance of a slight tuft, strong green gloss to the head and that pale band behind the nail, all of which were also seen on the second occasion when it was much closer."

Well, this bird certainly does seem to be something of a mystery!  If nothing else it does provide a great example of why we should be cautious about identifying birds from photos... 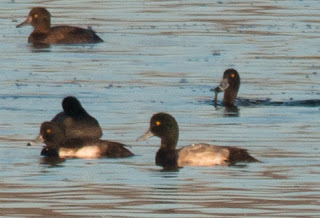 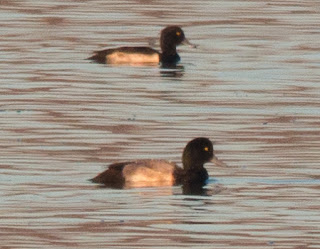 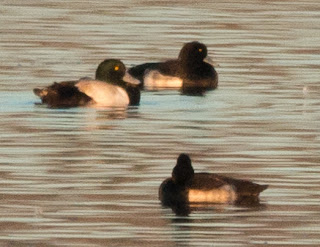 
Andy and I would both be interested to hear other people's views on this bird, so please let us know if you have any thoughts.