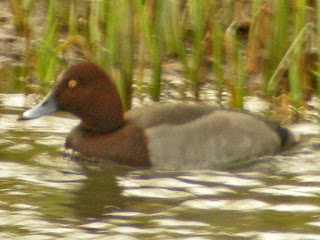 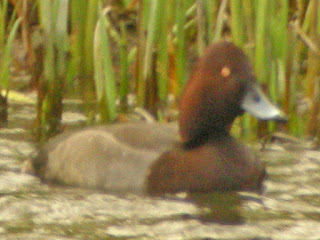 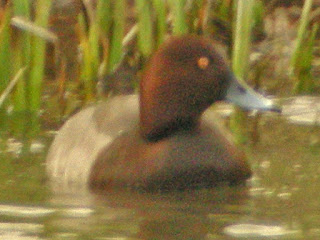 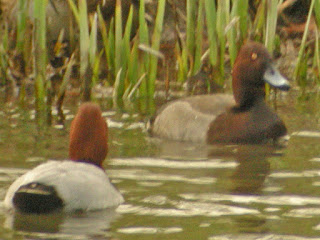 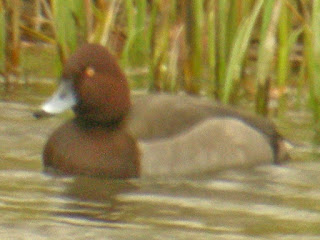 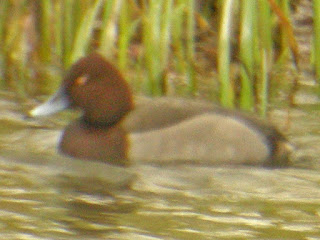 
The next bird was at the same location as the one above but the following winter - presumably it was the same returning bird. 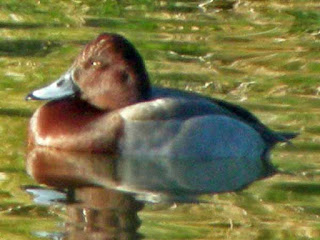 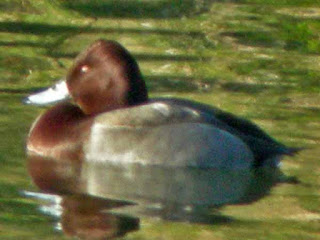 
This hybrid is responsible for a few erroneous claims of Ferruginous Duck in the UK - they seem to turn up here nearly as often as pure Ferruginous Ducks.  Some can apparently be more similar to Redhead in appearance. Most drakes seem to be more straightforward to separate from any pure species.


Females may be even more subtle and harder to detect, but note the Pochard-like bill profile of this bird as well as the hint of grey on the scapulars which seemed to appear and disappear according to the angle and light.  The bird was accompanying (and presumed to be offspring of) a long-staying Ferruginous Duck but that bird may itself not be a pure bird - some observers think it's a hybrid too, though presumably backcrossed with Ferruginous Duck.  It's probably an escaped bird, so a backcrossed bird is not as unlikely as it might be were it be a wild bird.  I've discussed the identity of this bird on my blog - make sure you read the comments as well as the main text for the full discussion.


The next photo is presumably the same bird about a year later - it was still accompanying the controversial female Ferruginous Duck or backcrossed hybrid.


The Ferruginous Duck influence on the next female wasn't immediately obvious to me in the field and I started off thinking it might be Pochard x Tufted Duck.  Its dark brown colouration, not dissimilar to Tufted Duck and its lack of reddish tones to suggest Ferruginous Duck set me off in that direction.  But female Pochard x Tufted Duck tend to look greyer on the body and have an obvious pale patch at the base of the bill - or at least some of them do - so it warranted a closer look.  The pure white under the tail separated from the brown flanks by a thick dark division was Ferruginous-like and although the head and bill profile mainly recalled Pochard, the head shape at times looked quite Ferruginous-like.  And on closer inspection there was some ferruginous tones on the head, especially the face that was a touch paler and redder than the rest of the head. In flight it showed a paler, whiter wing-bar than the accompanying Pochards, but not as white overall as Tufted Duck.  The shape of the wing-bar was like that of Pochard.

Poor light meant I had to use a high ISO setting and the photos are grainy making the bird appear a little paler on the body than it really looked in life. 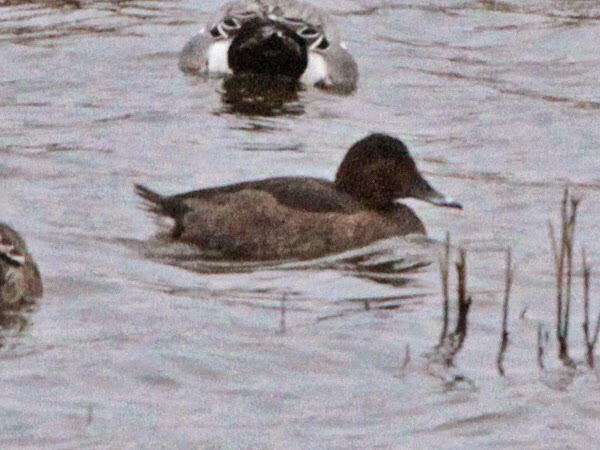 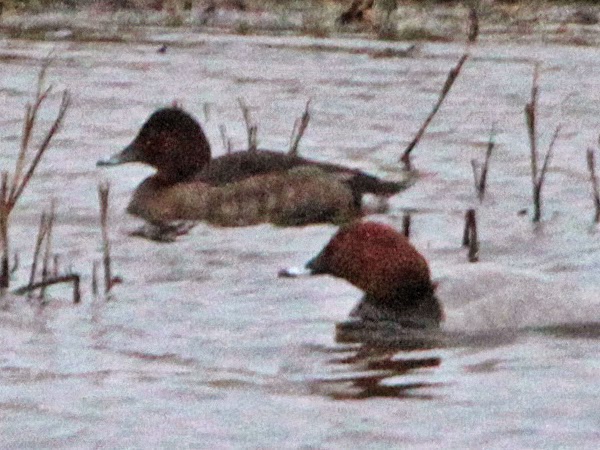 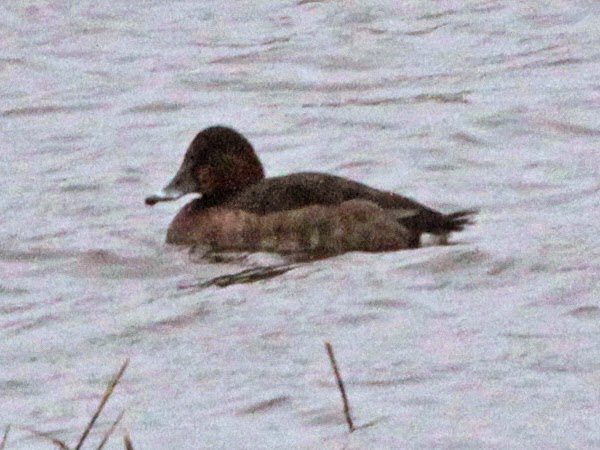 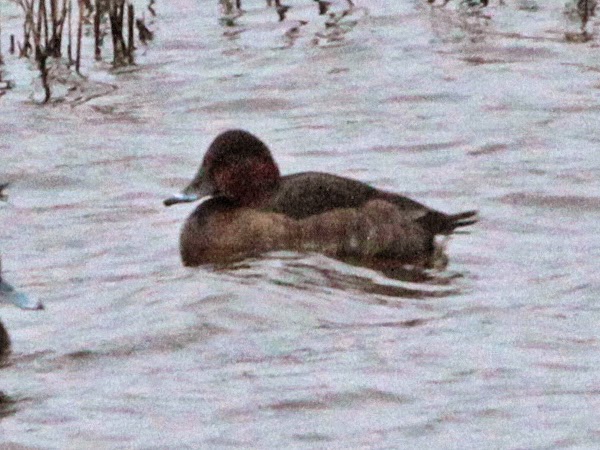 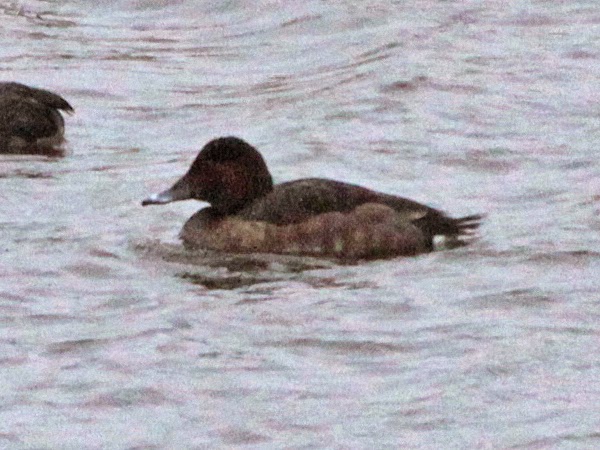 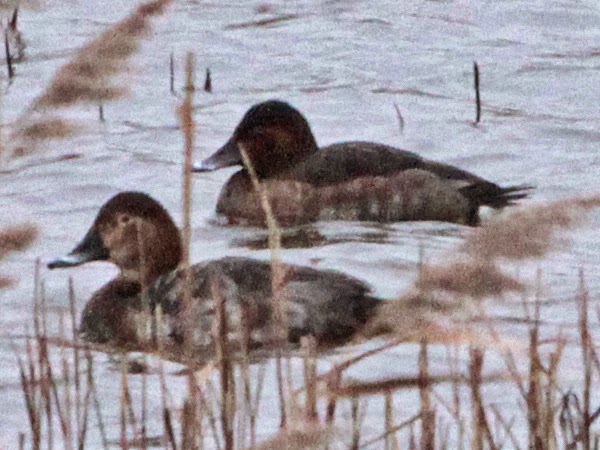 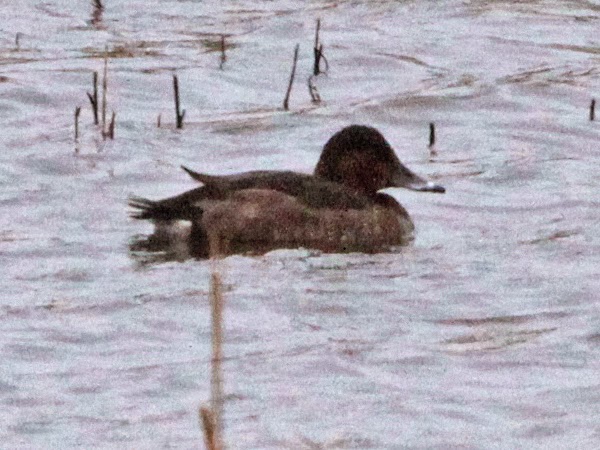 
This last bird made me revisit the identification of a bird I saw in Cornwall in November 2013.  I'd been through a similar process when I saw that bird, presuming the brown colour lacking red tones pointed to Tufted Duck rather than Ferruginous Duck.  In some ways it looked a lot like the Burnham Overy bird above, but it lacked the clear pointers to Ferruginous Duck heritage.  Unlike the Burnham bird, the undertail area wasn't particularly white, there was even less reddish colour on the head (but a little does seem to be visible in the photos) and the head shape was less clearly reminiscent of Ferruginous Duck (to me at least).  At the time of observation and even after processing the photos, I identified it as Pochard x Tufted Duck.  Joern could see Ferruginous Duck in the structure and straight away asked whether it might have Ferruginous Duck in it... and now I'm finally coming round to that idea!

The Cornwall bird showed quite a similar wing-bar to the Norfolk bird above and similar body tones.  The bill was more uniform dark, so more like Ferruginous Duck than the more Pochard-like bill of the bird above.  Most of the female Pochard x Tufted Duck hybrids we have seen (which isn't many - at least speaking for myself) have shown a more Pochard-like body (with obvious grey) and a much paler face than this bird.  So it shows some significant similarity to a presumed Pochard x Ferruginous Duck hybrid and some significant differences from Pochard x Tufted Duck hybrids... I think it's time to sit it with the Pochard x Ferruginous Duck hybrids, even if I'm not quite ready to drop the "possible" qualifier.


There are two male hybrids in the next set of photos.  Both birds are in the first photo, one with its back to the camera towards the bottom left of the photo and one facing right to the right of centre.  One of the birds recalls Redhead to some extent while the other is much more like Ferruginous Duck (perhaps it is a backcross?).  Lars Michael Nielson whose friend Rasmus found the birds and took the photos tells us that the more Redhead-like one was a little smaller, more round headed and darker bodied than Pochard.  Apparently it showed a wing bar like that of a Lesser Scaup.  The more Ferruginous Duck-like bird differed from Ferruginous Duck in having a larger bill and a head shape that was a little nearer that of Pochard. It had a colder brown colour and a only recognisable yellow tinge to the eye colour. 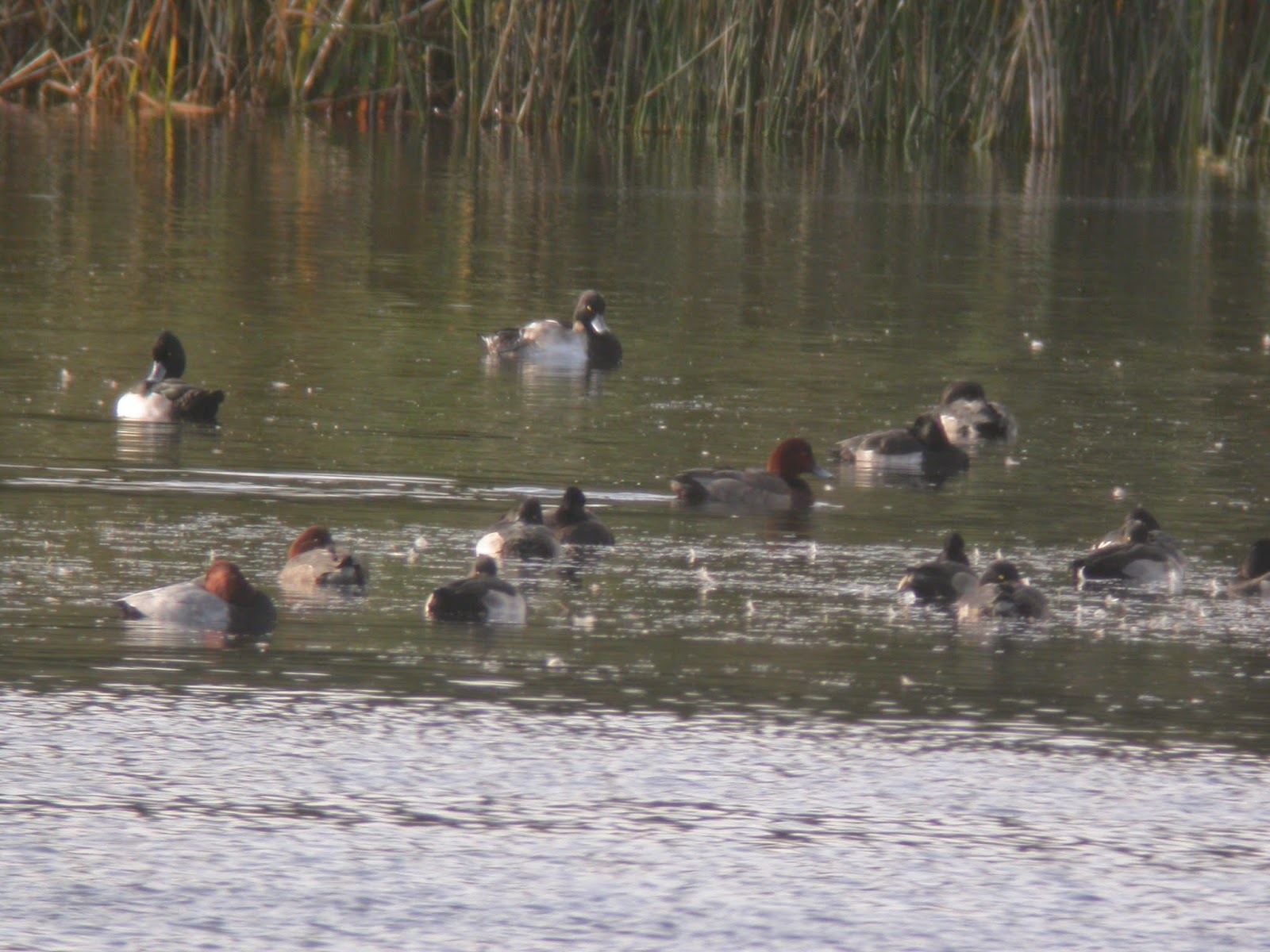 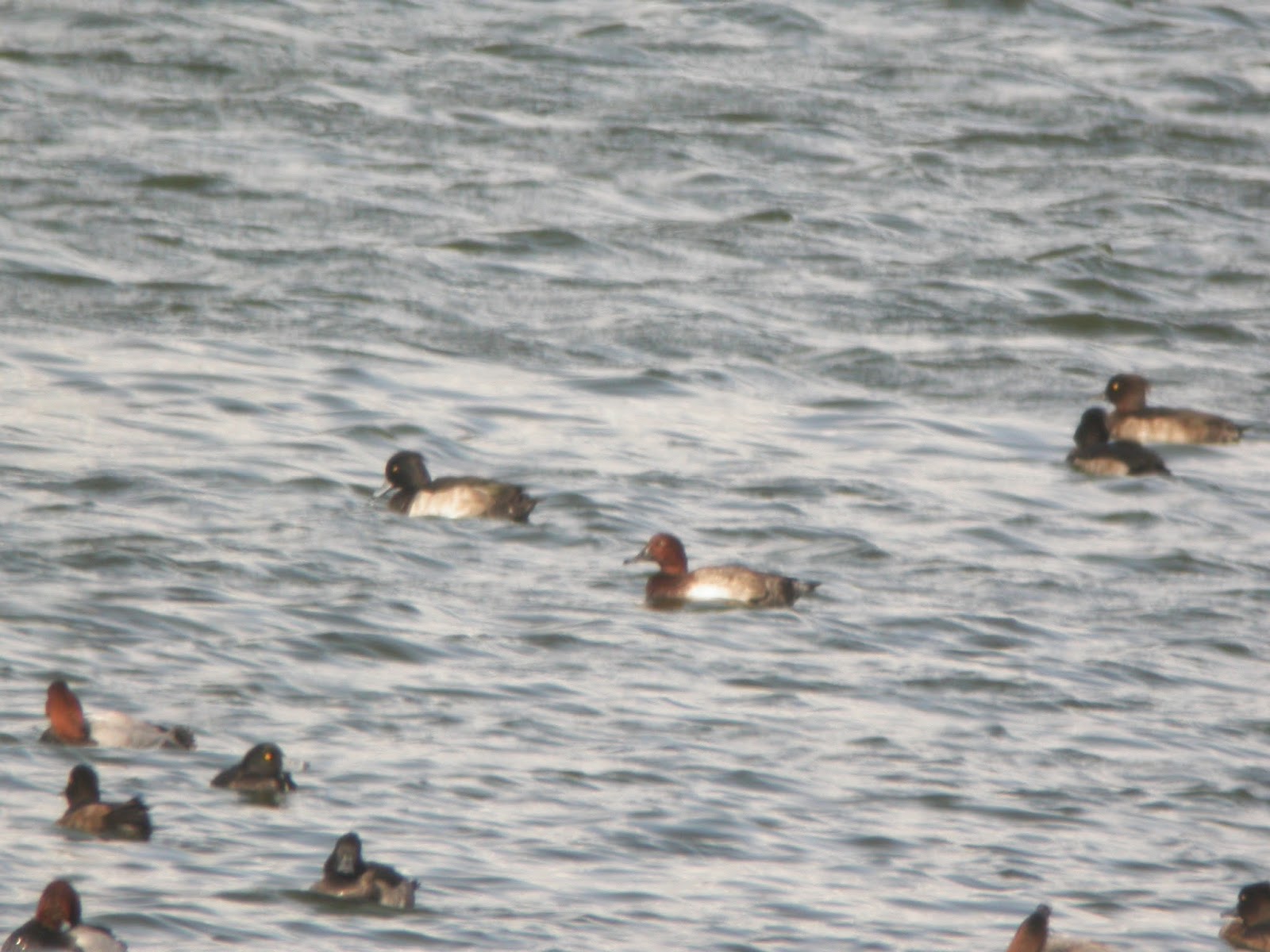 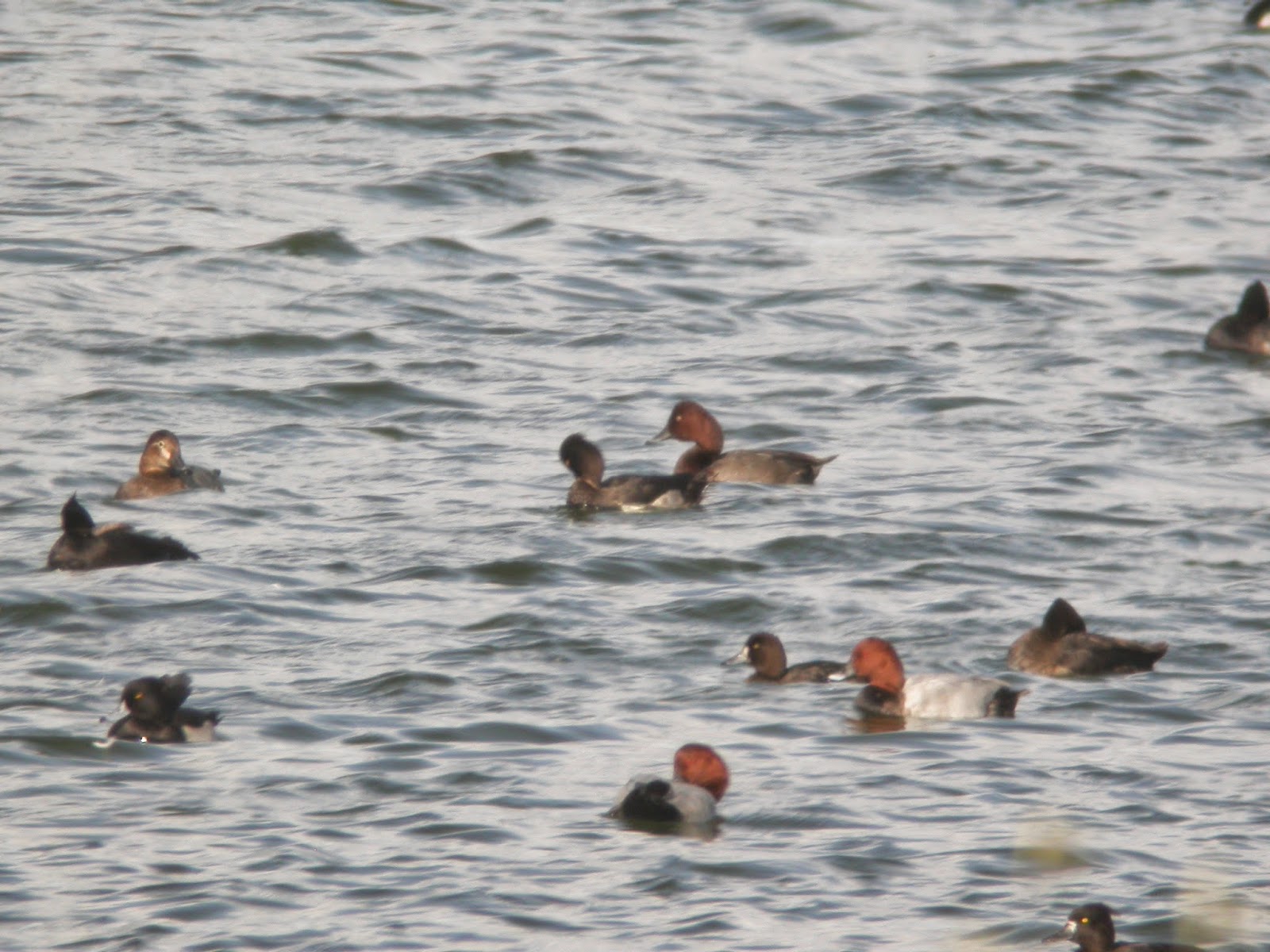 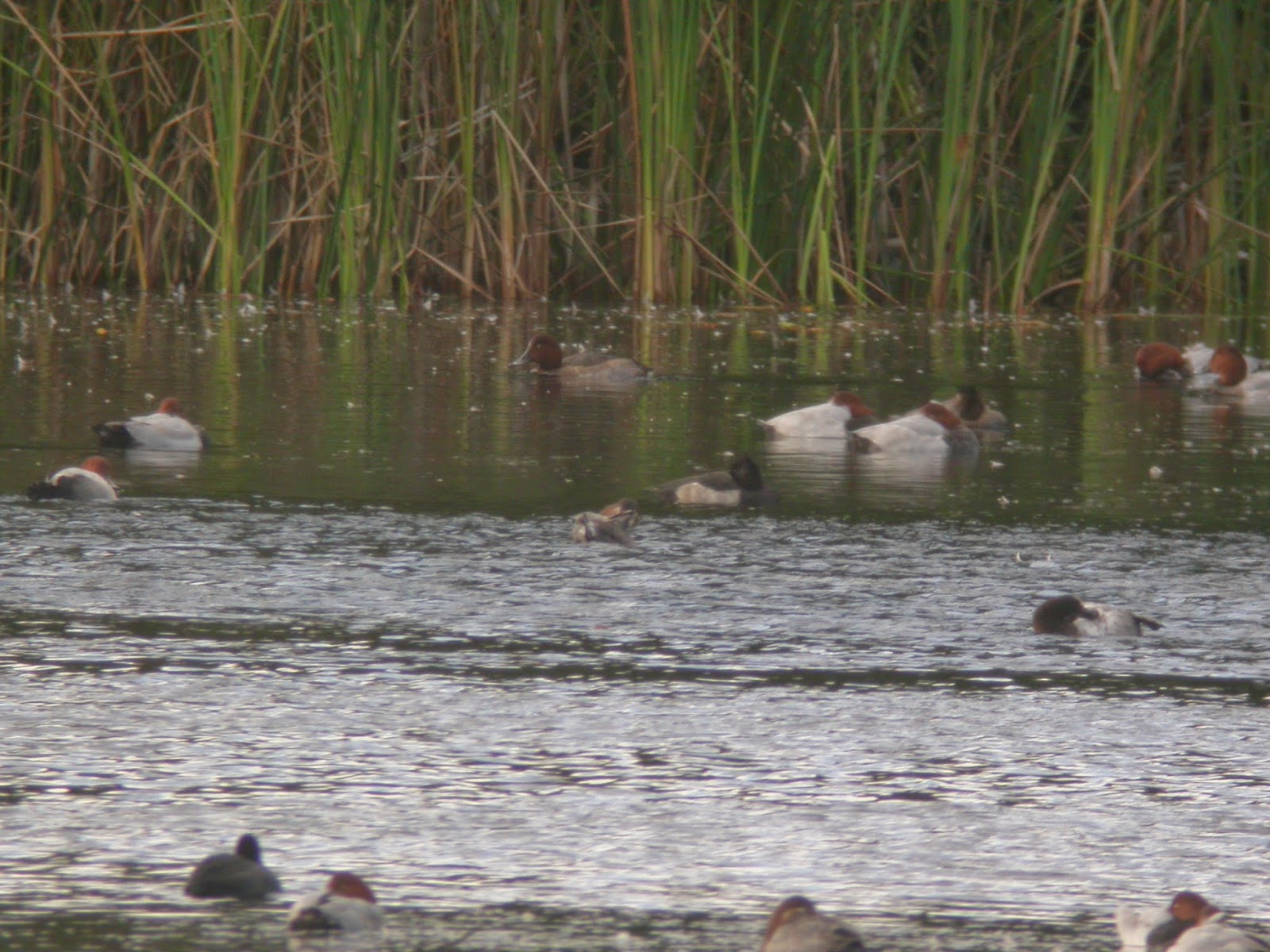 
The next bird is a female, unfortunately facing away from the camera.  Lars Michael Nielson tells us that it appeared colder than a pure Ferruginous Duck and had small black spots in the white under the tail.  Its bill was more Pochard-like and it showed grey in the wing bar. 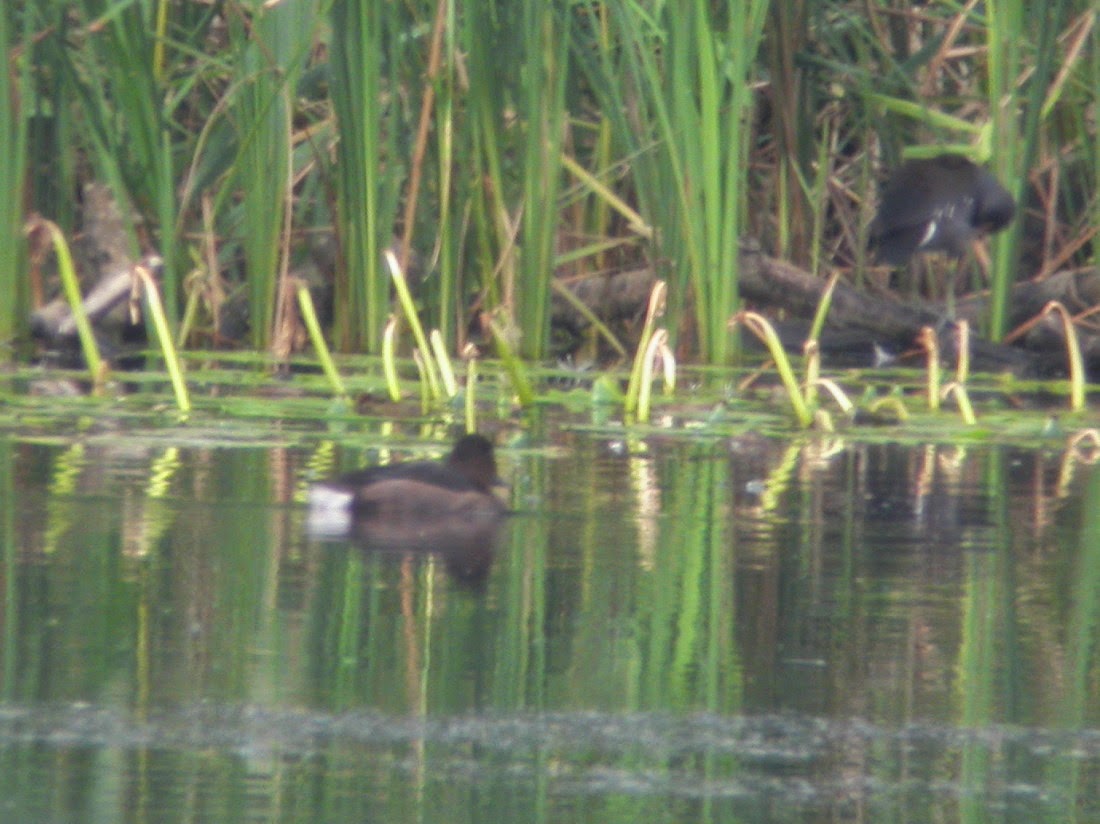 
Although they're quite shaky, contrasty and not terribly sharp, you can see a bit more detail in the following video clips of this bird: