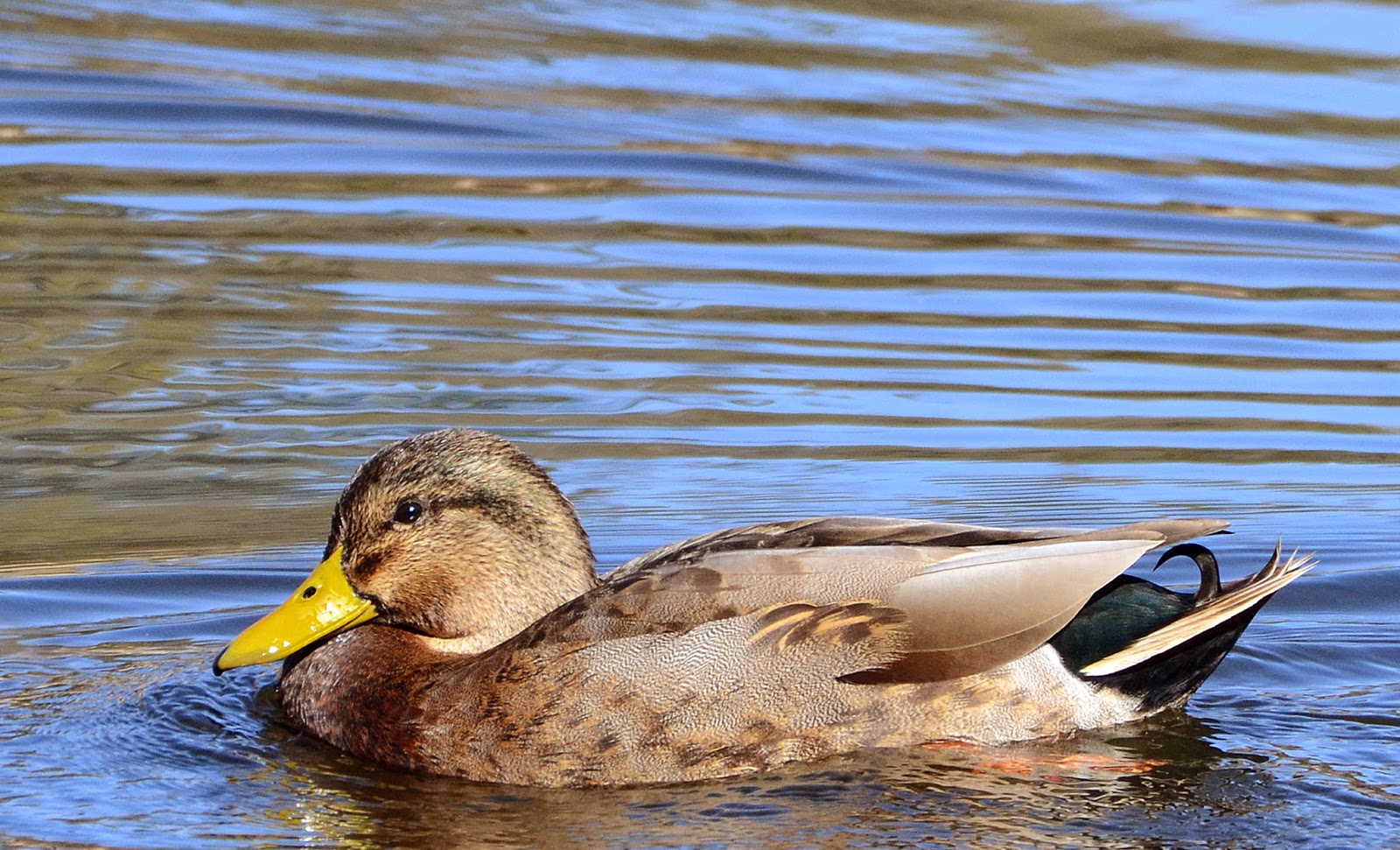 
There is a lot we don't know about the taxonomy and origins of the Mallard, Mexican Duck, Mottled Duck, Black Duck complex but one thing we do know is that when they come into contact with one another they often hybridise (how often is another question, and one of the sticking points in getting agreement as to whether or not Mexican Ducks deserve full species status - see this link from the 10,000 Birds website for some insight into that debate).

Important note: Since most of the birds shown on this page have been documented some new research has come to light which may cast doubt on some of the identifications.  Andy Engilis has informed Steve that his research team has been looking at Mexican Duck traits, linked to genetics, and found that plumage is far more complex in this species than previously understood.  Formative male Mexican Ducks can express many Mallard traits: curled tail, black rump and brighter chest are just a few regularly expressed.  A lot of plumage attributed to hybrids in Hawaiian, Mexican and Florida Mottled Duck are incorrect, and with Mexican Duck it is even more complex.

This new information may mean that some of the birds labelled as hybrids below may in fact be pure Mexican Ducks - as yet I have not established which birds, if any, may be mislabelled, so please treat the conclusions below with appropriate caution.


The bird above looks a lot like an intersex Mallard, though many of those show a more female-like bill.  Steve tells us that it was paired with a female Mallard, which should remove any doubt.

The next bird is pretty close to Mexican Duck (and so is presumably not an F1 hybrid).  Steve draws attention to the bit of green in the head and the greenish black on the upper tail coverts which indicate Mallard influence.  On a view where theses aren't visible it would look just like a Mexican Duck. 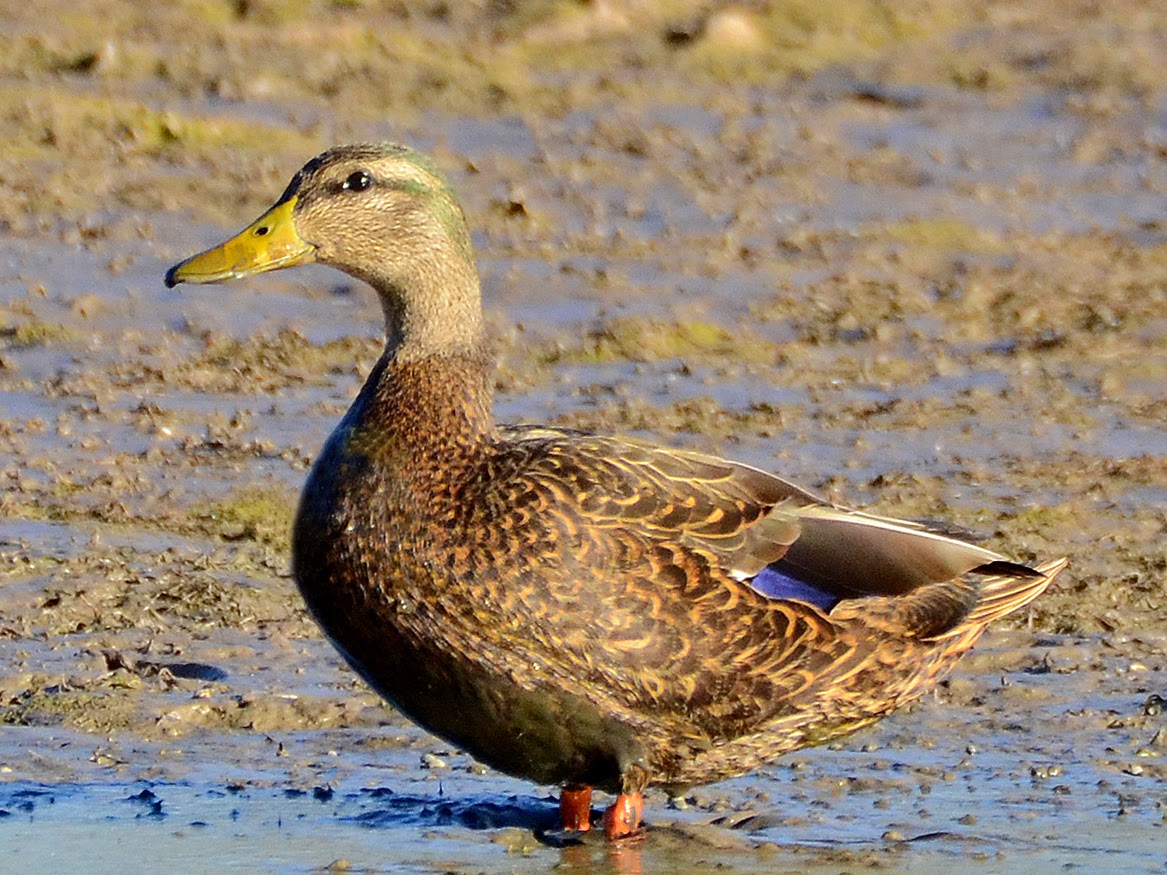 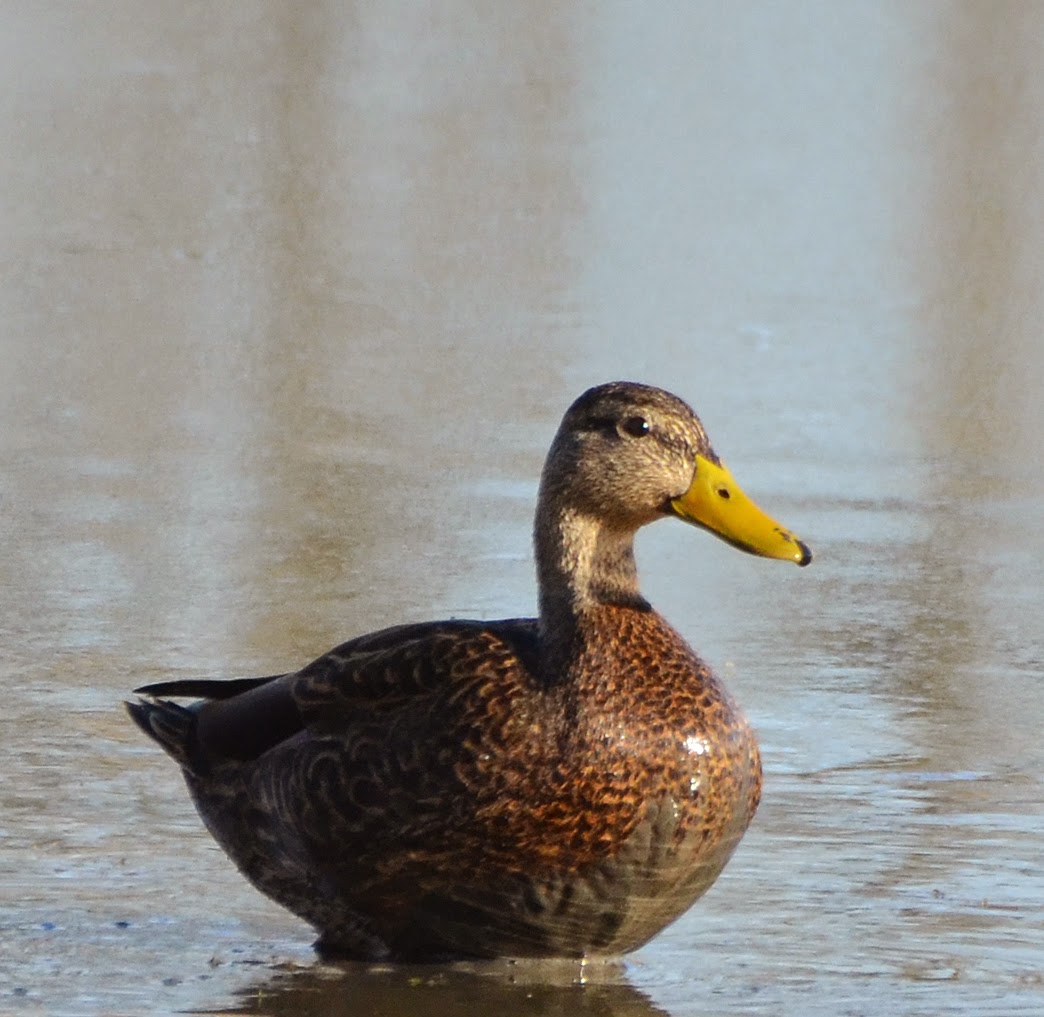 
Cathy describes how she arrived at the ID for the next bird:


"While I initially identified this bird as an intersex mallard the general feeling is that intersex birds are females and retain a female orange bill.  The fact that this bird appears to be a male supports the proposed hybrid.  Birds of this hybrid can range from looking 'quite mallard' to 'quite Mexican Duck' with everything in between.  The bi-color head is common.  Other traits supporting this hybrid include lack of any neck ring and quite a bit of brown on the tail.  Furthermore, upon research, it seems that the patterned tan belly is much more common in hybrids than in intersex birds.  In most intersex the belly is replaced with gray 'male' feathers fairly early on.  The curly "mallard-like" tail feathers are more pronounced on this bird than most of this cross." 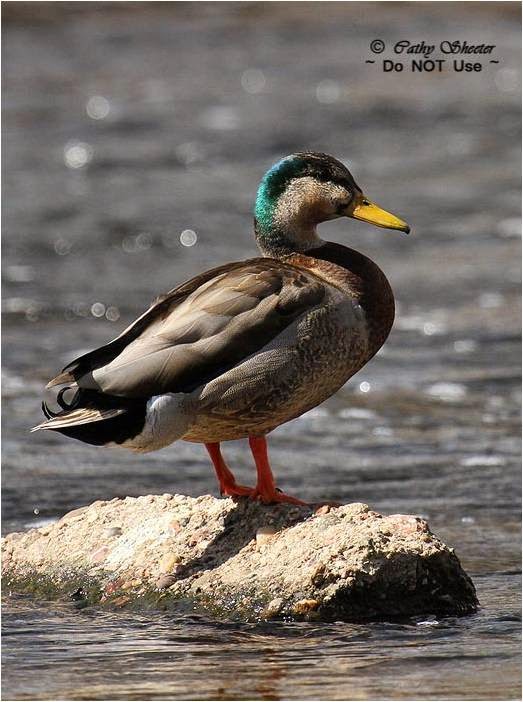 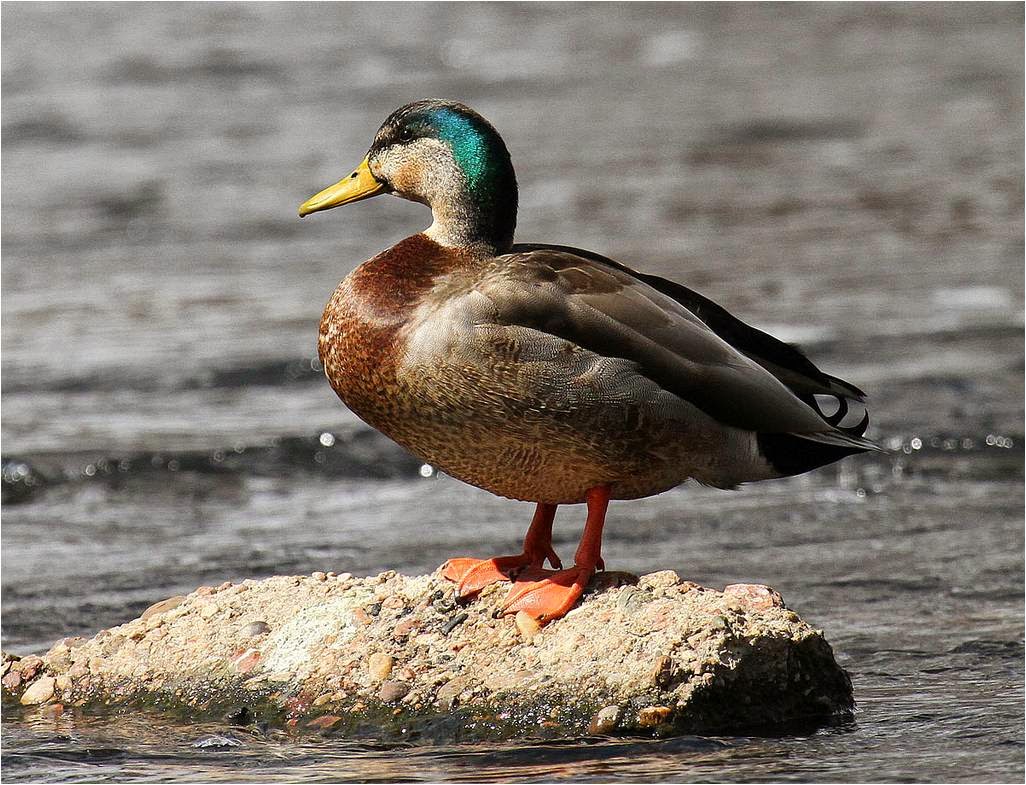 
The next male duck had a normal looking female Mallard in tow.  Steve describes how it looked far more like a male Mexican Duck than a male Mallard, but the fairly white tail and paler lower belly/vent bespeak of some Mallard genes.  The bird didn't seem as dark as "typical" male Mexican Ducks. 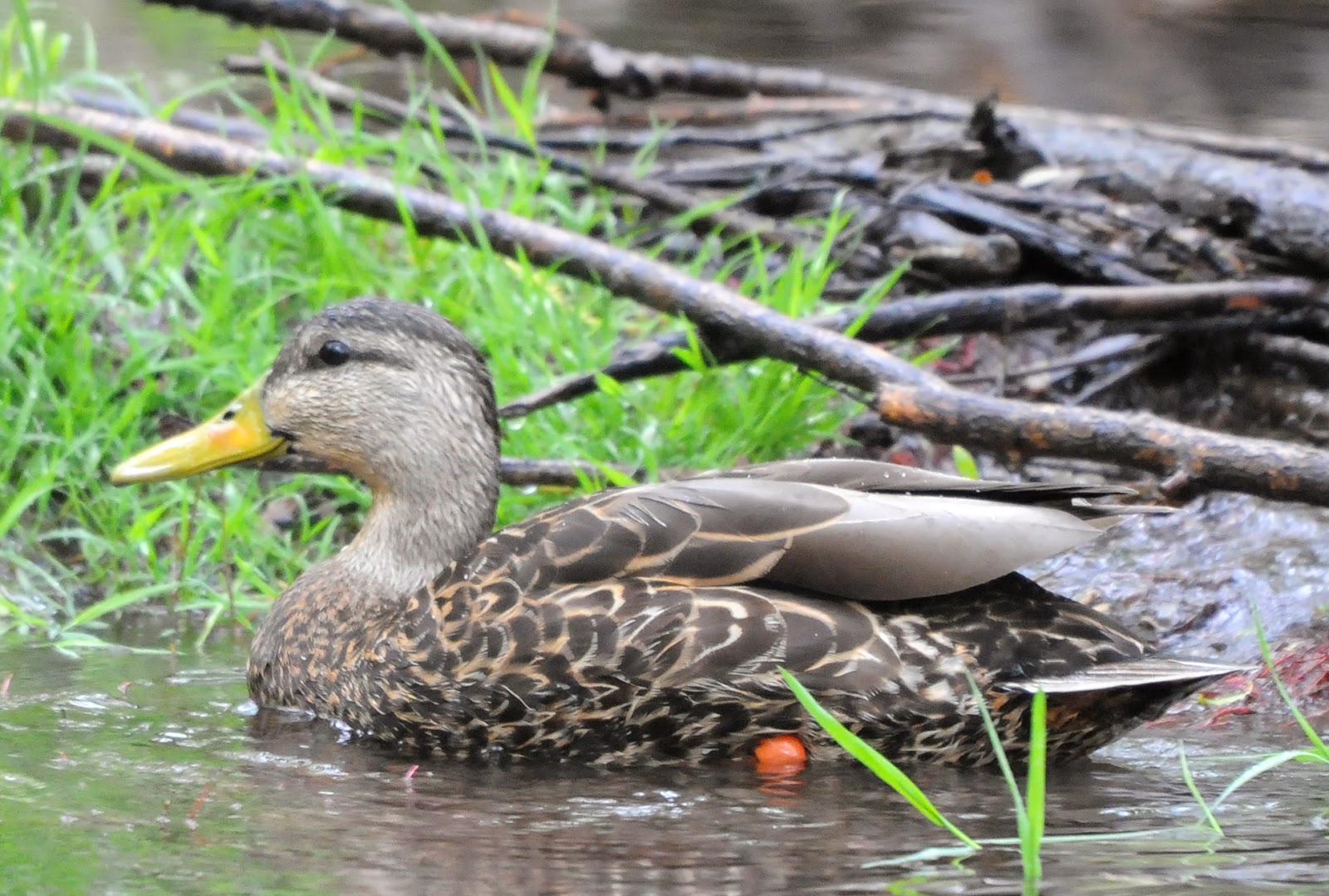 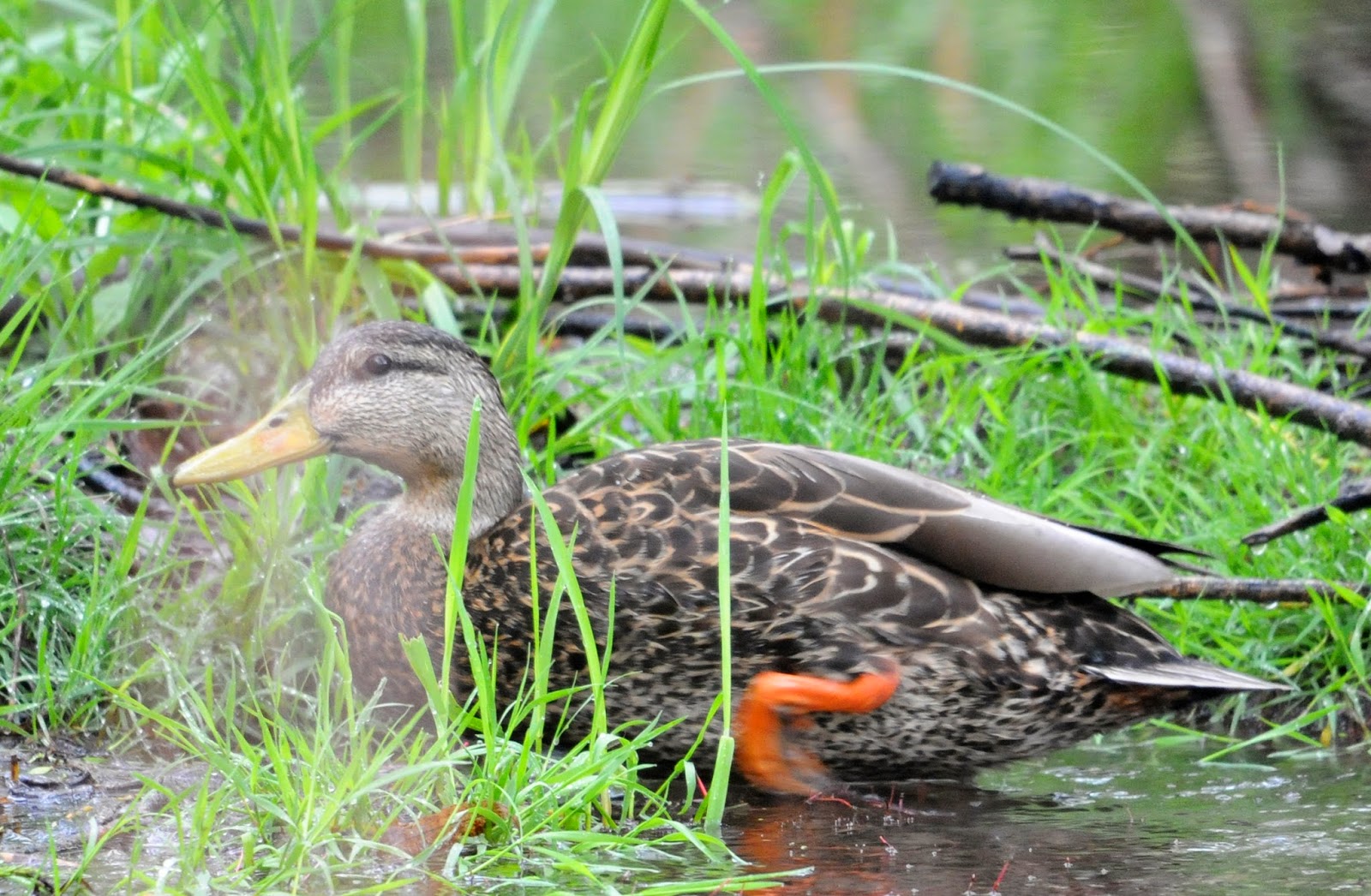 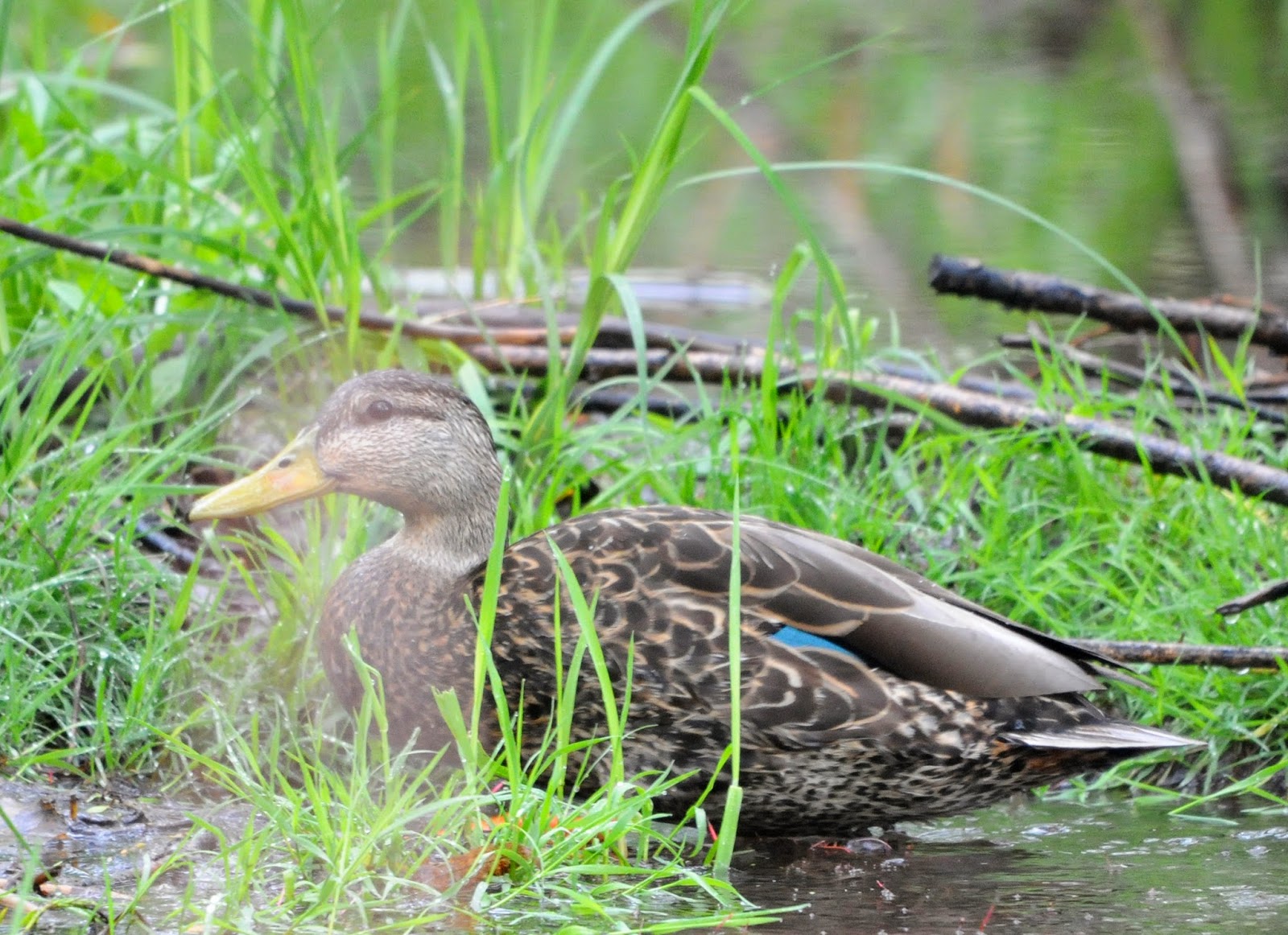 This bird looked much like a Mexican Duck but Steve says that in direct comparison with nearby Mallards, it wasn't quite dark enough.  Two central tail feathers are curved up a touch, the vent was a tad paler than the rest of the underparts, all characters of Mallard x Mexican Duck hybrids.  Finally, the tail seemed to show a bit too much white for a pure Mexican Duck.  The contrast between the chest and the head/neck, with the blackish crown and eye-stripe are very much Mexican Duck, as was the speculum (not visible here).

The next one could easily be passed off for a Mexican Duck if you ignore the tail end (the green streaks on head are visible only in just the right light).  Steve notes the black undertail coverts, solid dark uppertail coverts and the one erect tail feather (uppertail covert).  He also wonders about the female behind - her tail was typical of Mexican Duck, as was her speculum (pale blue, not purple, in most lights), plus moderate chest/neck contrast.  Overall, she was darker than nearby Mallards. 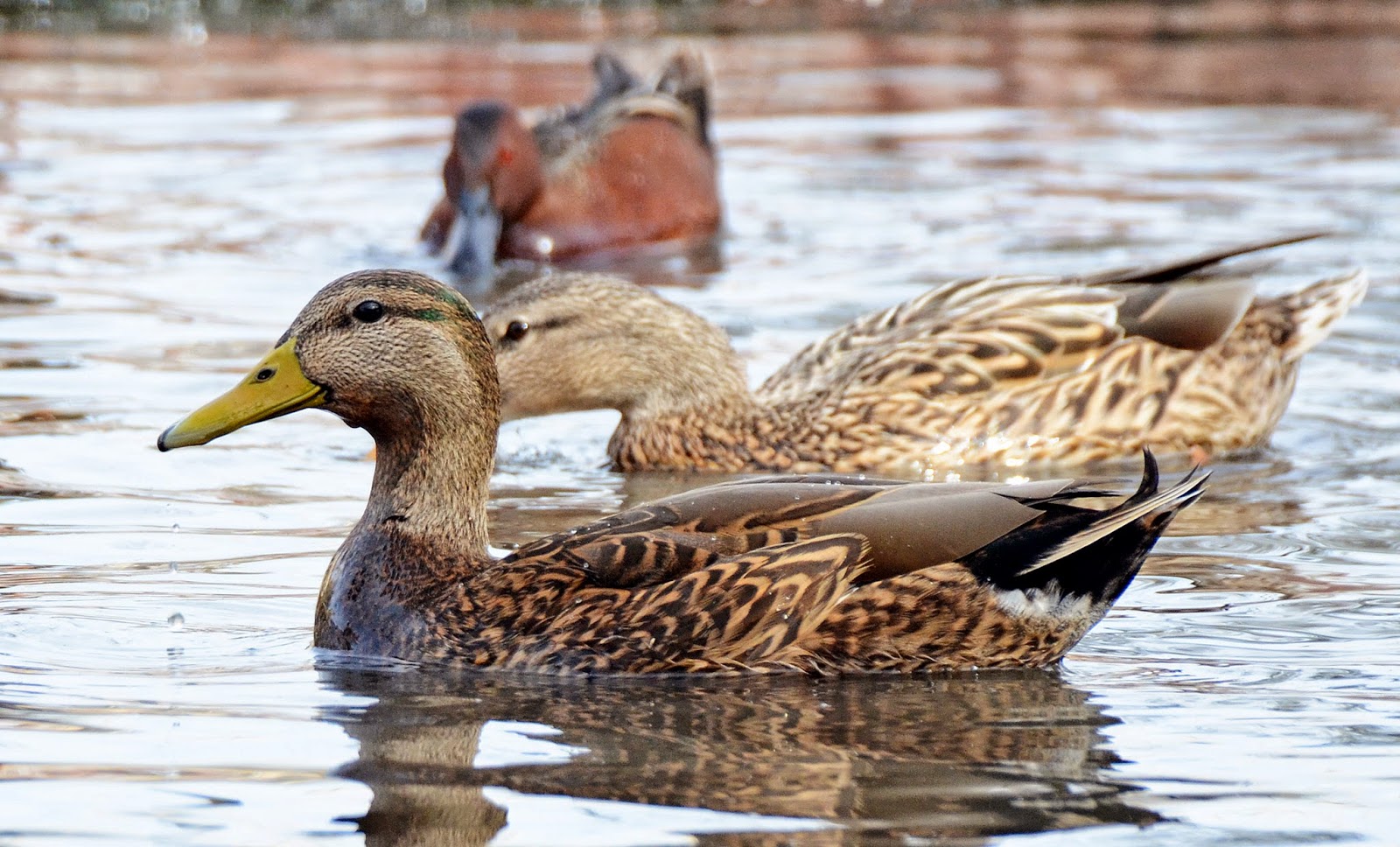 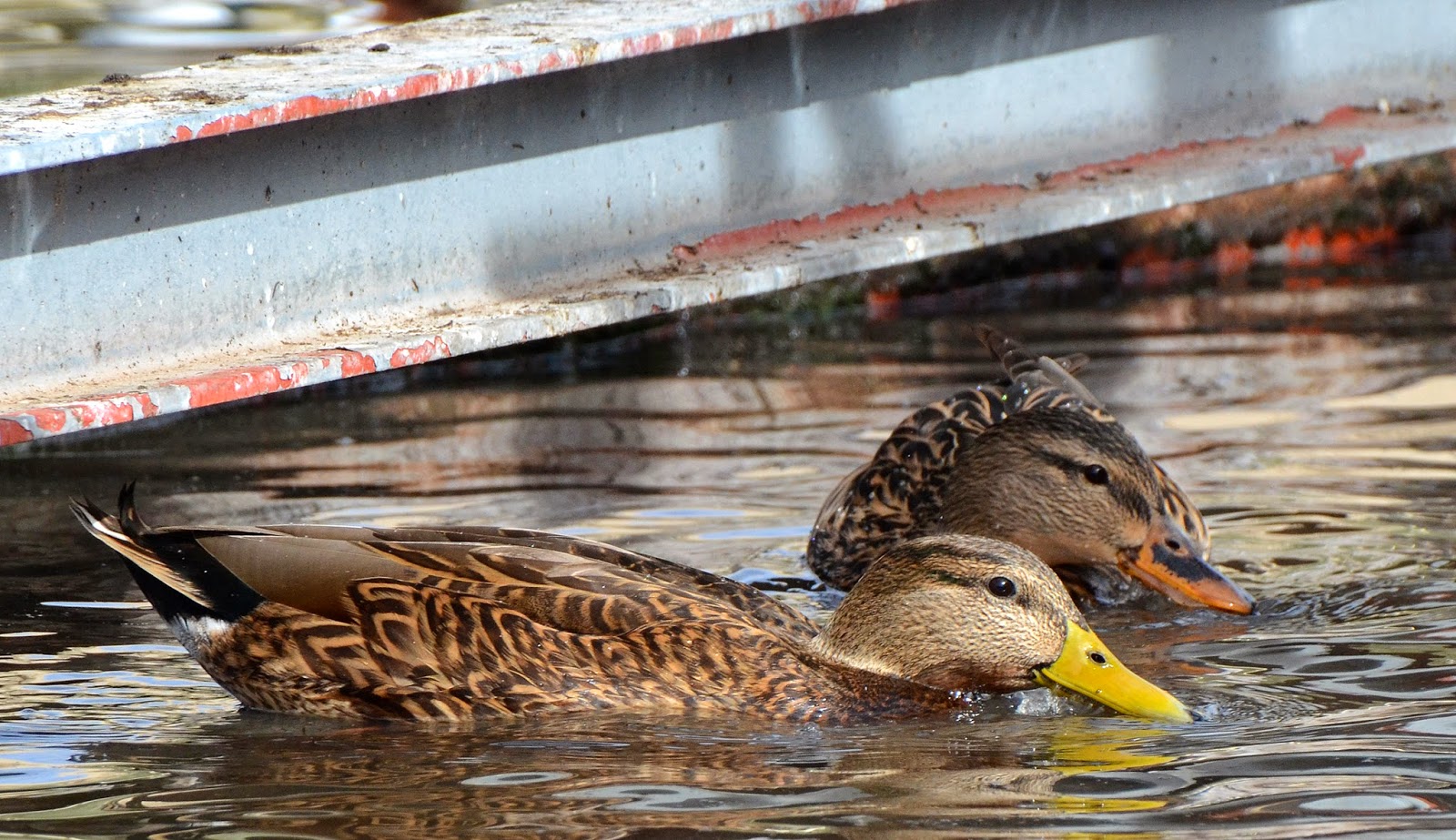 The next bird was across the road and showed the same Mallard traits as the last one: white and black on vent/undertail coverts, black (actually iridescent green) uppertail coverts without scalloping, one tail feather bent upwards and a bit of green iridescence to the dark areas normally dark on a Mexican Duck's head. 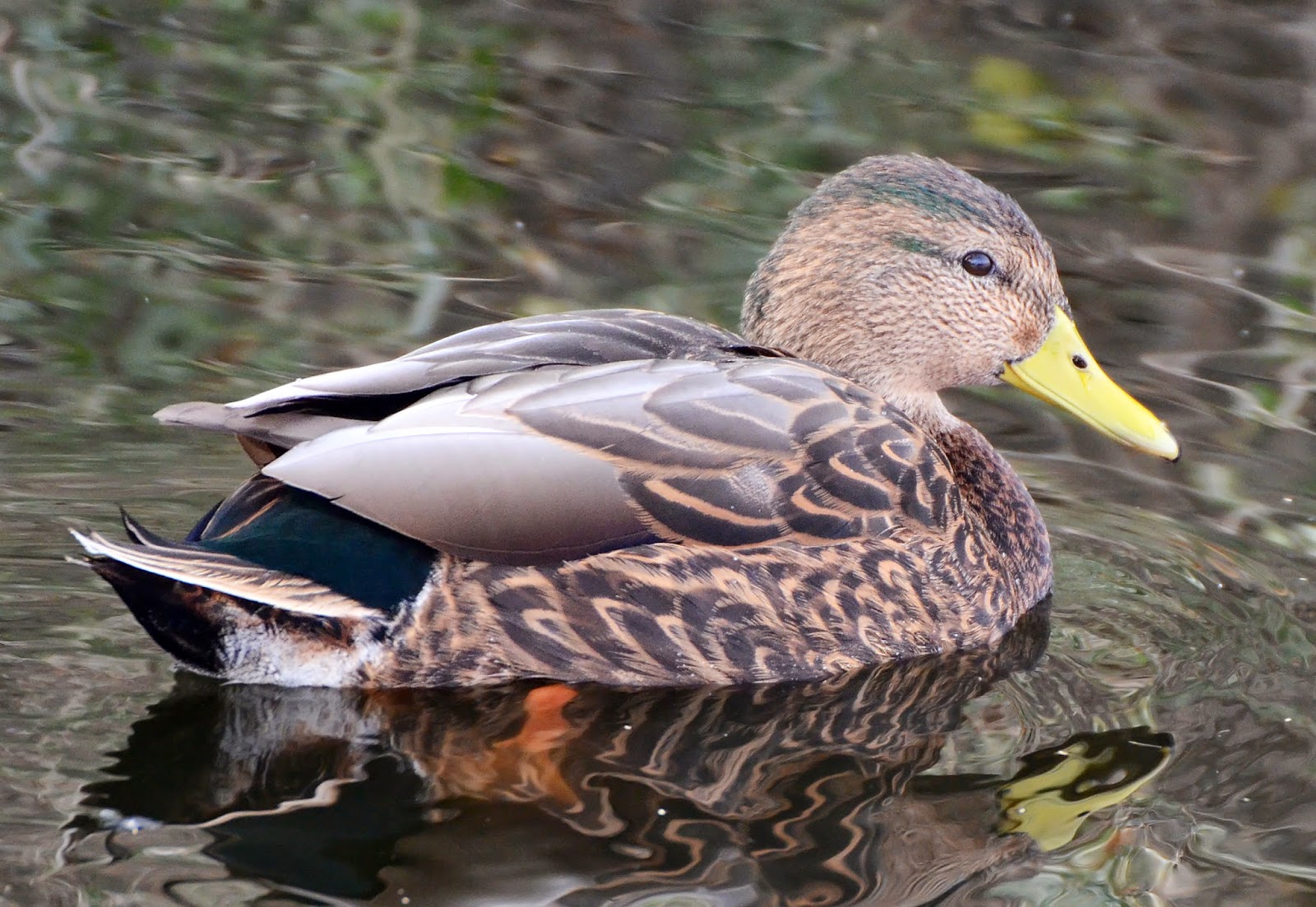 Again, on the next bird, similar Mallard genes seem to persist.  Steve draws attention to some green on head, mostly in areas that would be dark on that of a Mexican duck, extensive (nearly) unmarked dark uppertail coverts and rump, and a single tail feather pointed upwards.  On this bird the borders to the speculum seemed more prominent that expected on a pure Mexican Duck. 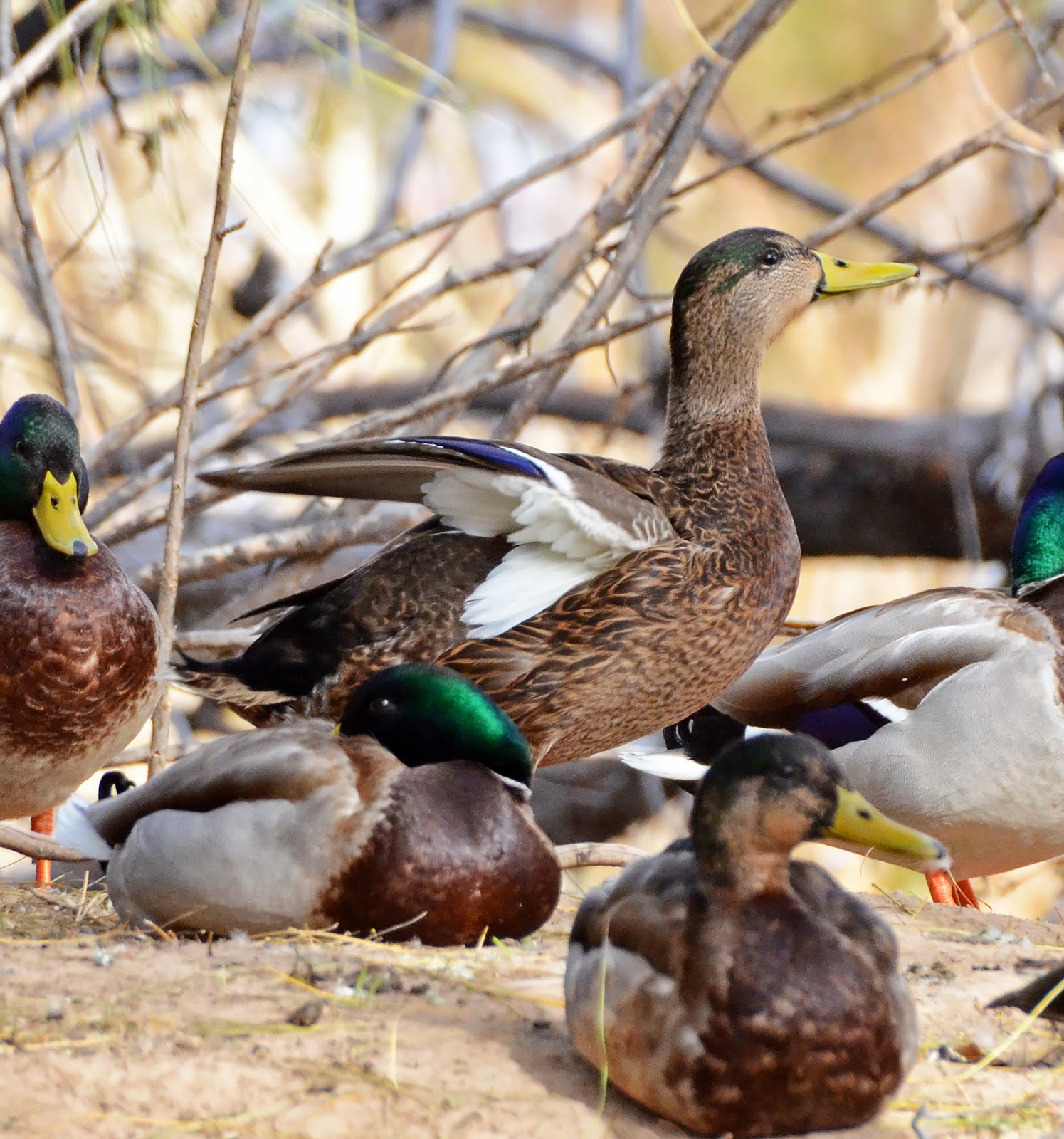 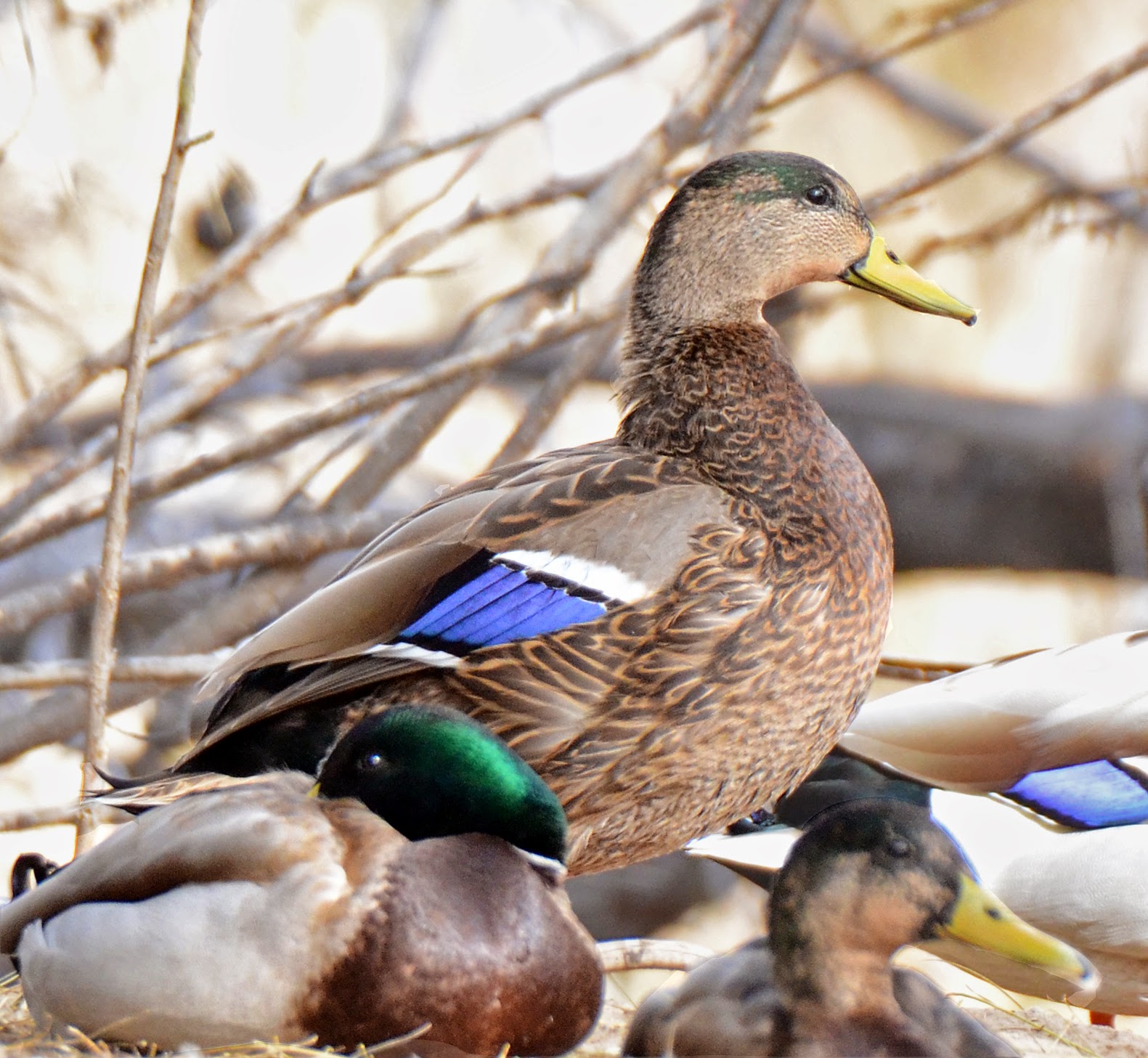 
So far in this thread we have seen hybrids that are fairly close to Mexican Duck in appearance but more Mallard-like birds are also typical.  In the last two photos above (IDs 1211-1212) note the bird in the foreground, which is one such bird.

Here is another, so Mallard-like it could even be backcrossed with Mallard.  It differs from typical Mallard in having bimaculated head and some brown mottling on sides but note that I have seen apparently pure Mallards in the UK showing a very similar pattern - whether these are birds that have retained juvenile feathers or whether they are advanced intersex females, or if there is another explanation, I am not sure. 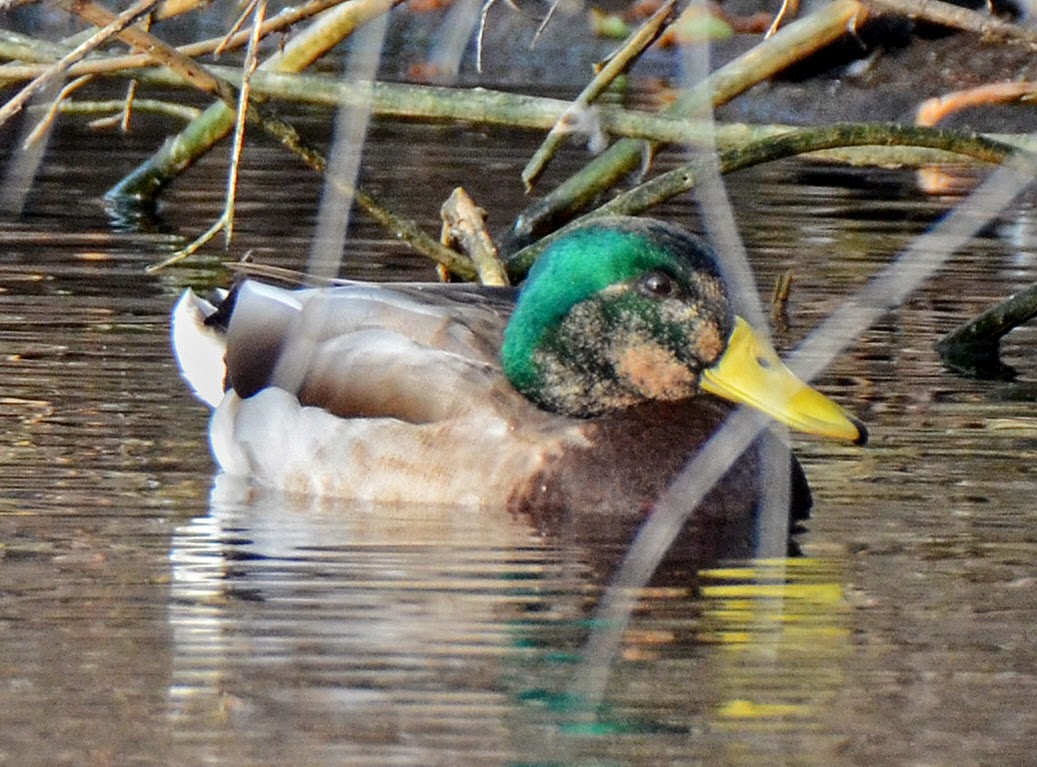 
The next one is more like Mexican Duck again.  Steve says:


"This is a male duck, with fairly substantial contrast between chest and neck, though not as much as in Mexican Duck.  The bird, surprisingly, shows little, if any, upturn to the tail feathers, but the tail, and solid uppertail coverts clearly bespeak Mallard genes." 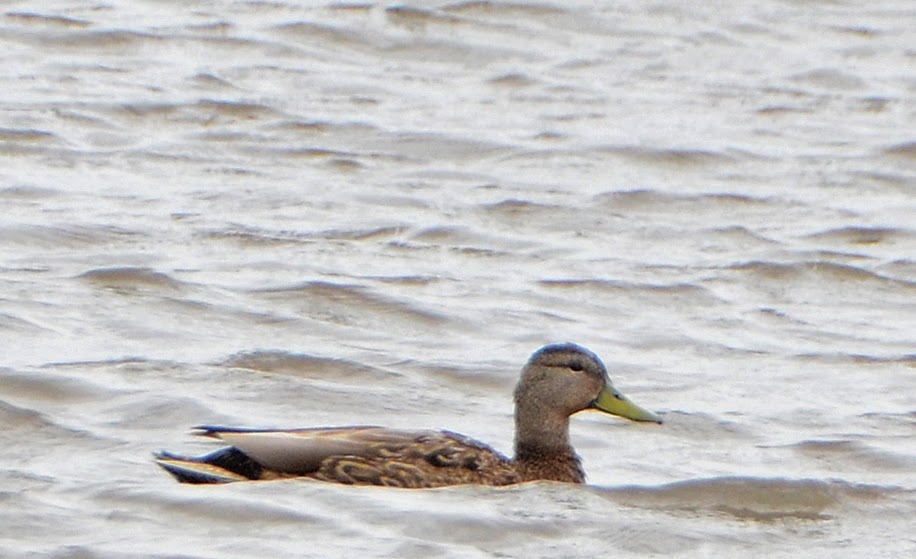 
The next one is also extremely similar to Mexican Duck, as reflected in Steve's commentary:


"This bird looks very much like a male Mexican duck but notice the solid dark upper tail coverts (typically, Mexican Ducks show internal markings on these feathers).  Also, note that the tail is not mottled like a Mexican Duck but diffusely gray, and the tail has darker central tail feathers, all Mallard traits.  One does wonder at what point does one simply label such birds Mexican Ducks." 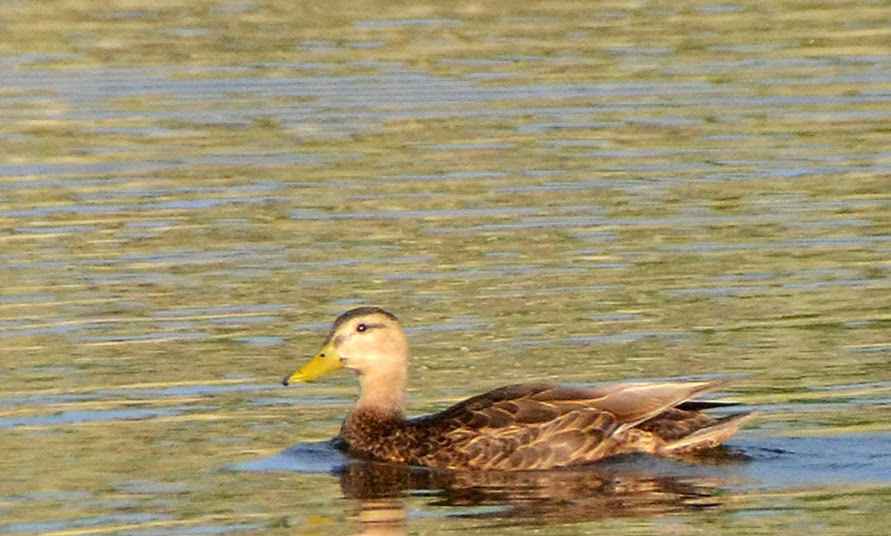 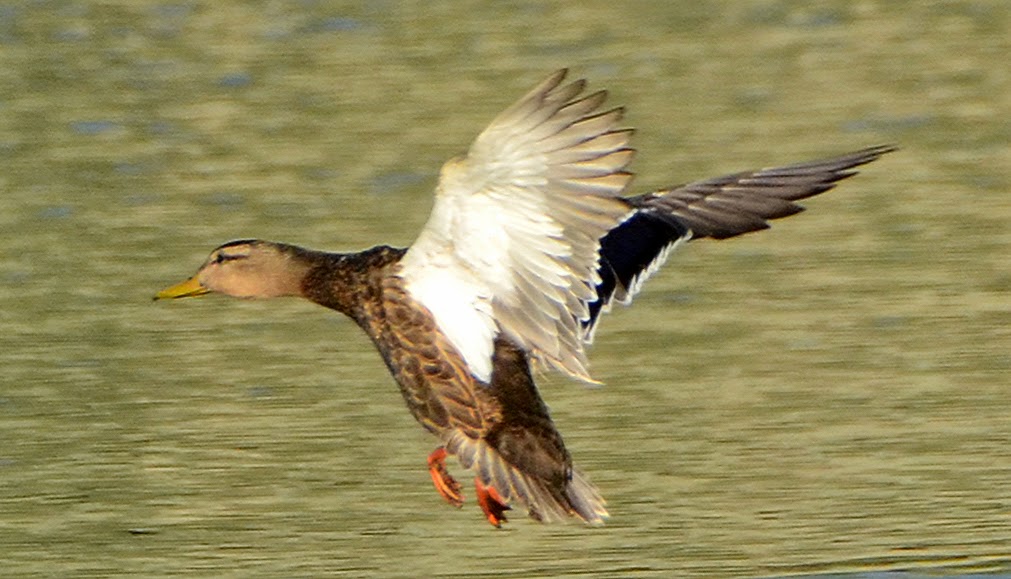 
The next one was paired with a female Mallard. 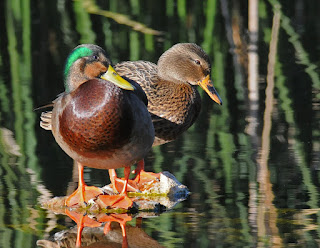 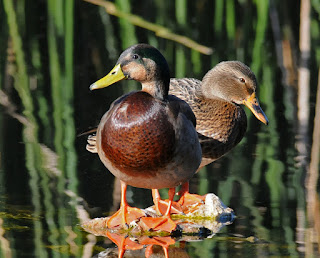 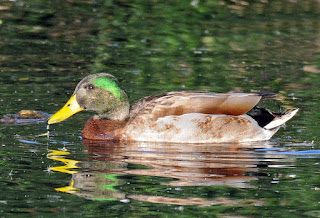 
About the next bird, Steve writes:


"The contrast between chest and neck is close to that of Mexican Duck, and the tail is appropriately dark, but the undertail coverts and vent is too pale for a pure Mexican Duck." 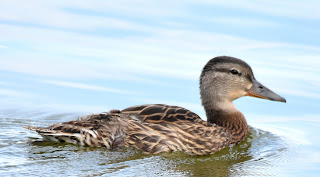 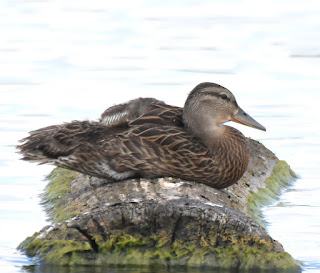 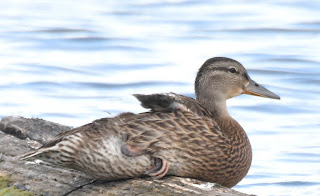 
On the following bird Steve pointed out the up-curved central tail-coverts and the contrasting rusty chest (which is present on many Mexican Ducks, but the contrast was more distinct on this bird than shown in the photo).  Apparently the trailing edge of the speculum was also narrower than is normal for Mallard.  However, this is the bird that prompted the information from Andy Engilis referred to near the top of this page - this bird may in fact be a formative male Mexican Duck and not a hybrid. 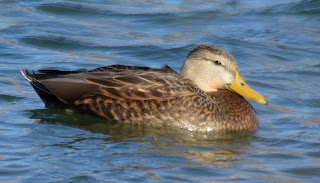