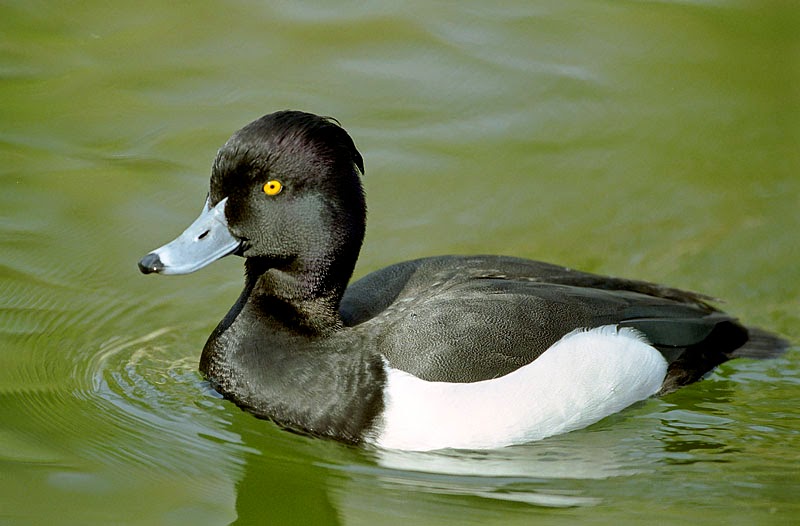 
This bird is close to Tufted Duck in appearance but with its finely vermiculated dark grey (not black) back it can't be a pure Tufted Duck.  Although not proven its appearance seems to be consistent with Tufted Duck x Greater Scaup hybrid.  Carl Gunnar has learned that some ducklings were seen nearby a few years earlier which were suspected of being female Scaup x male Tufted Duck. 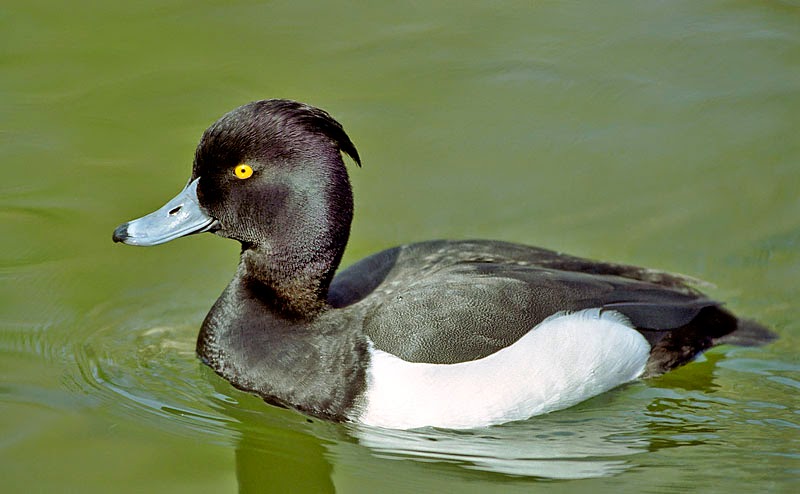 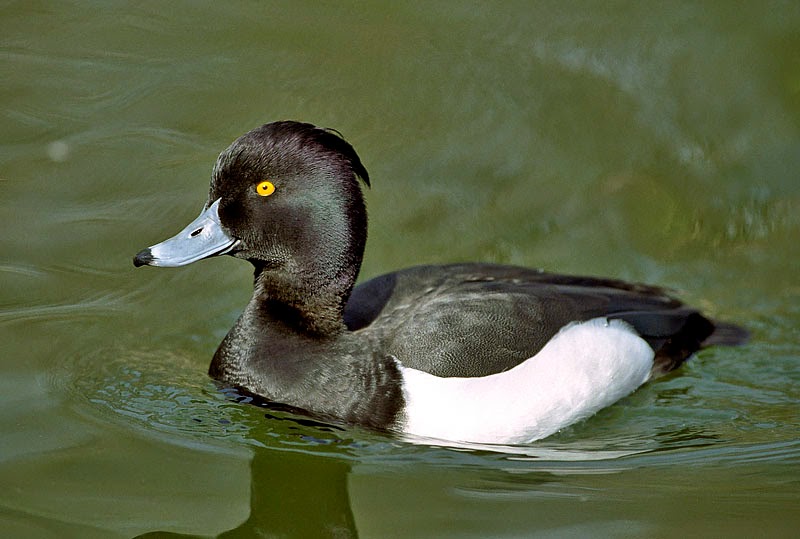 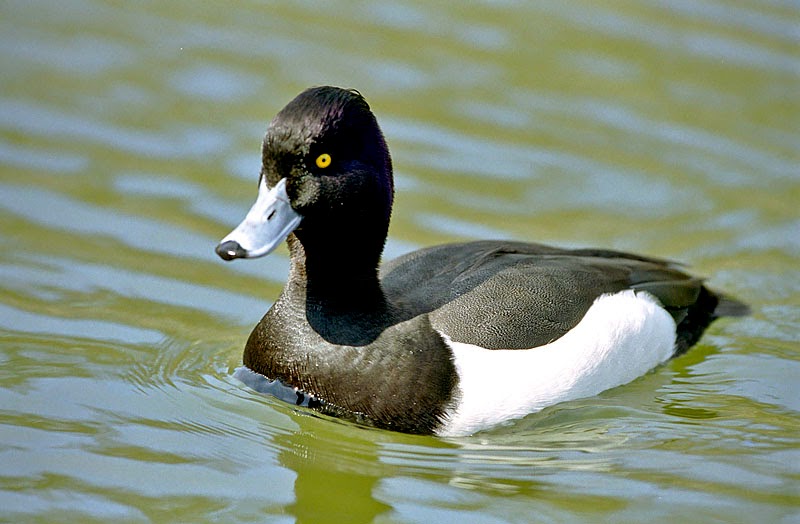 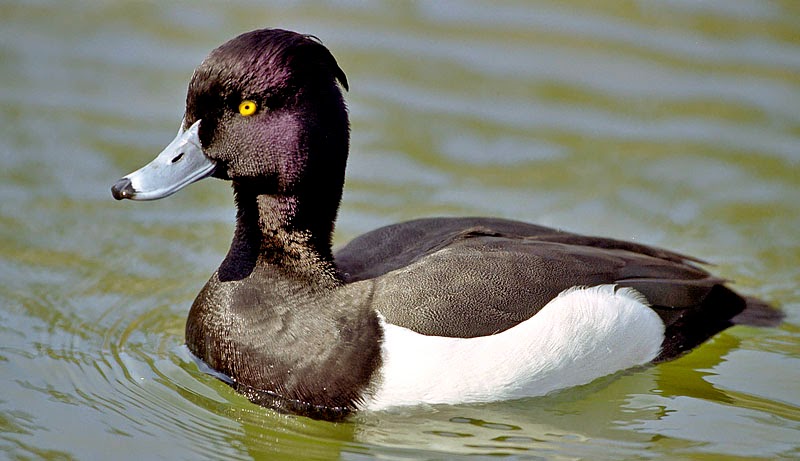 This female was seen in the same area the same summer.  The bill tip pattern doesn't seem quite right for a pure Greater Scaup and it's probably another hybrid. 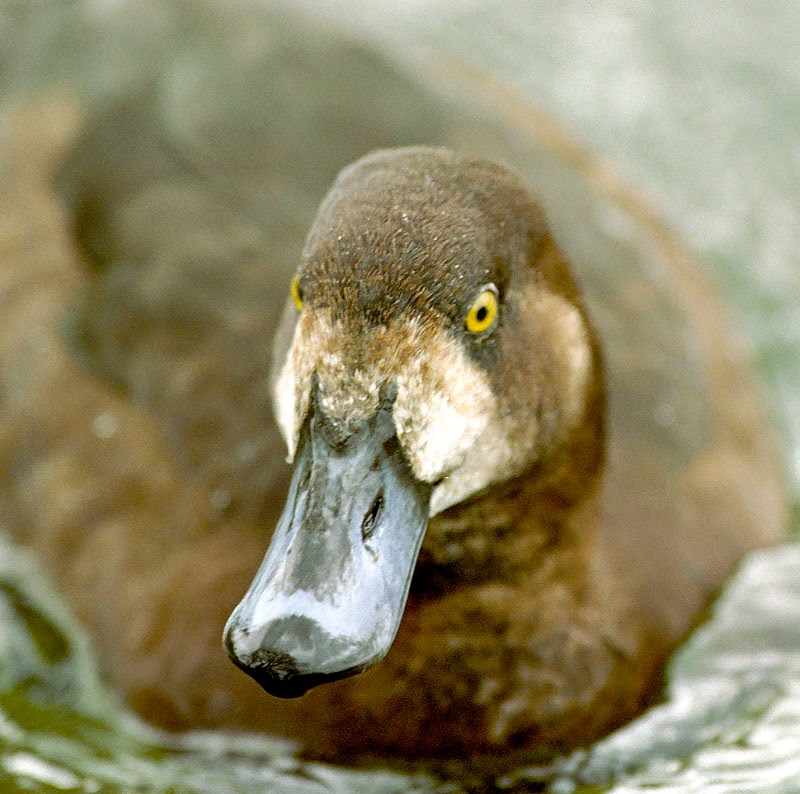 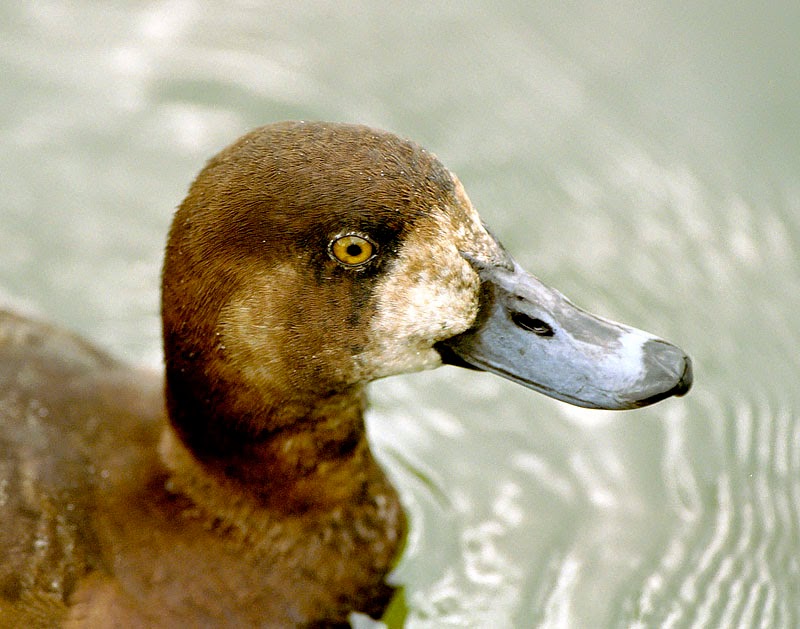 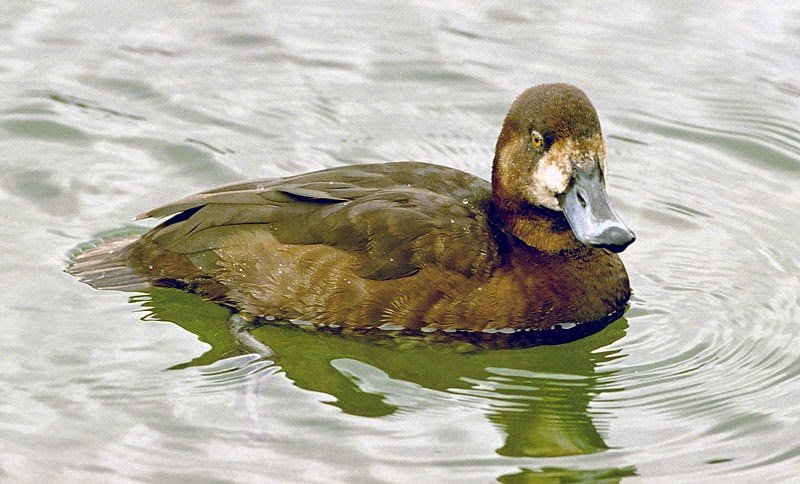 The next bird is probably the same male as shown above (photo IDs 1077-1081), but in partial eclipse plumage. 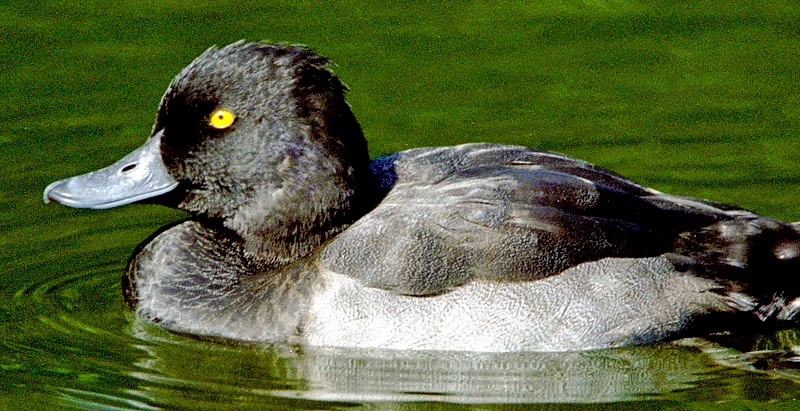 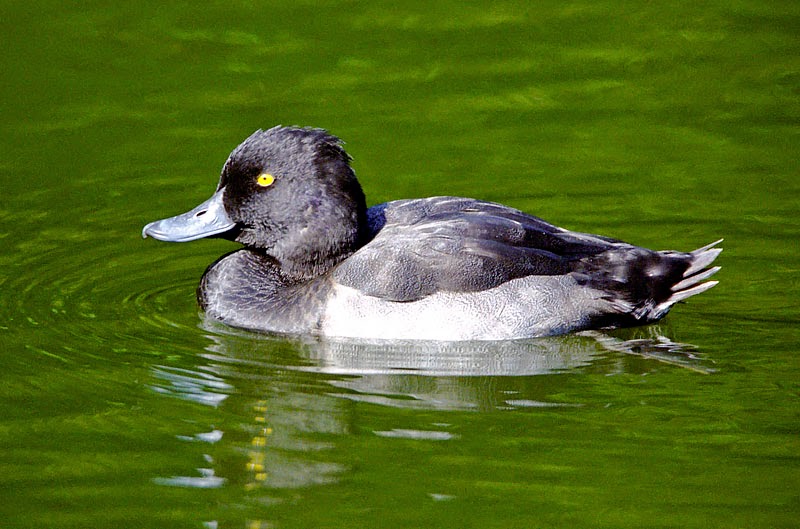 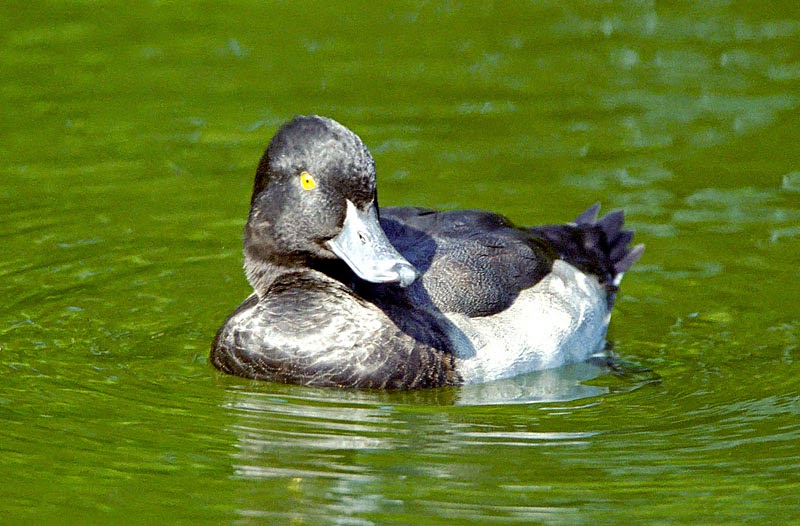 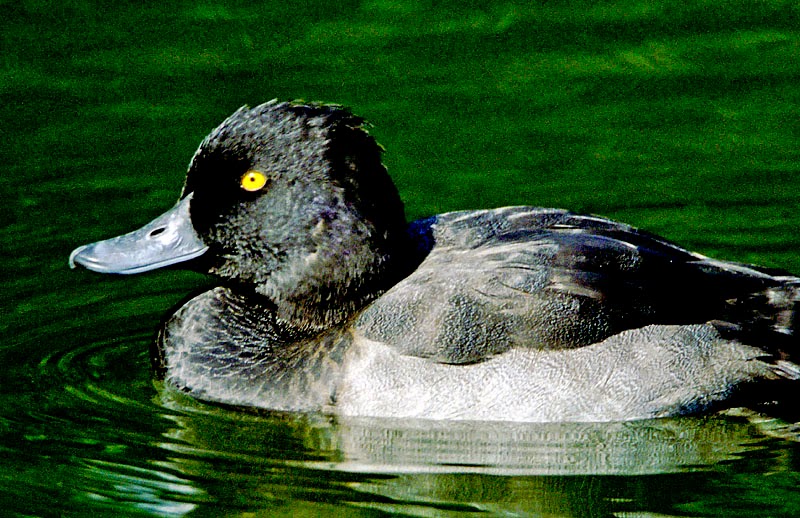 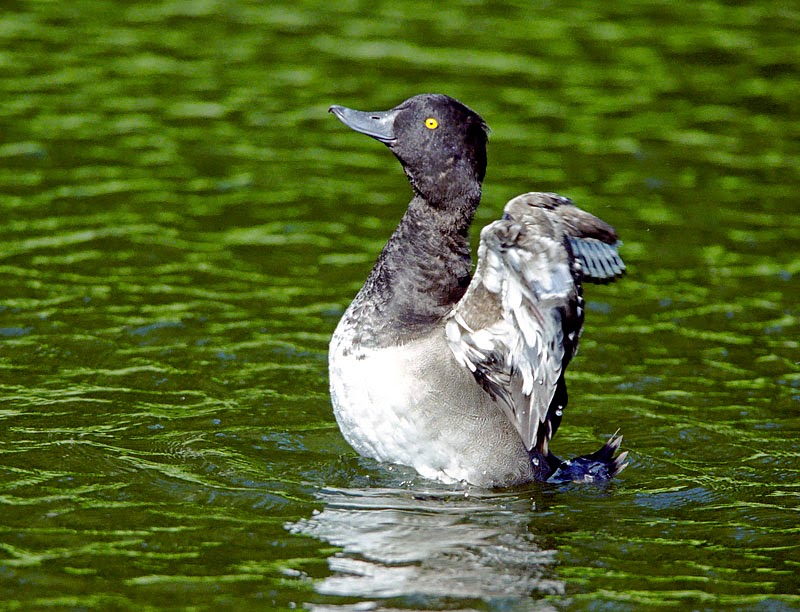 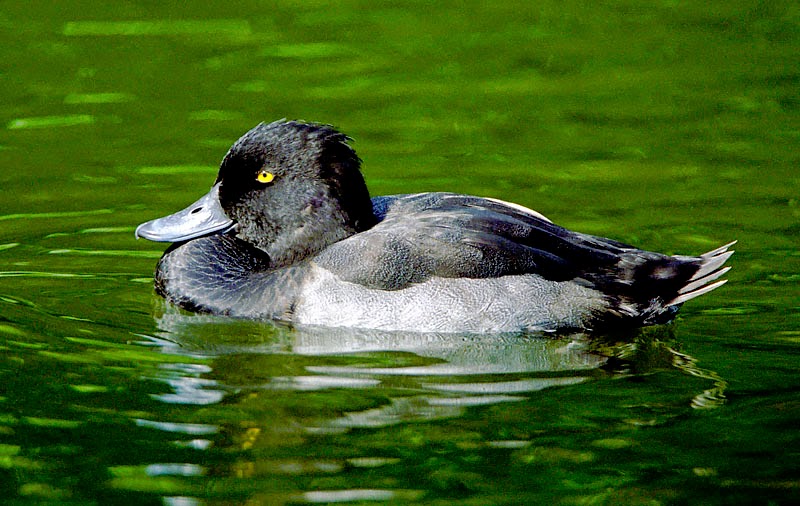 
The next bird is captive but spent the whole duration of Joern's visit asleep, preventing him from seeing the bill pattern or iris colour.  The only candidate parent species kept at the zoo were Common Pochard, Tufted Duck and Greater Scaup.  Joern explains:


"The general coloration is somewhat similar to Greater Scaup, but the mantle is a bit darker. There is a bump of feathers or a short crest at the rear of the head, indicating Tufted Duck involvement.  Tufted Duck x Common Pochard can look superficially similar, but in general the flanks of this type of hybrid are slightly greyish and the vermiculations on the mantle are less course than here.  Therefore in my opinion this bird is most likely a hybrid Tufted Duck x Greater Scaup." 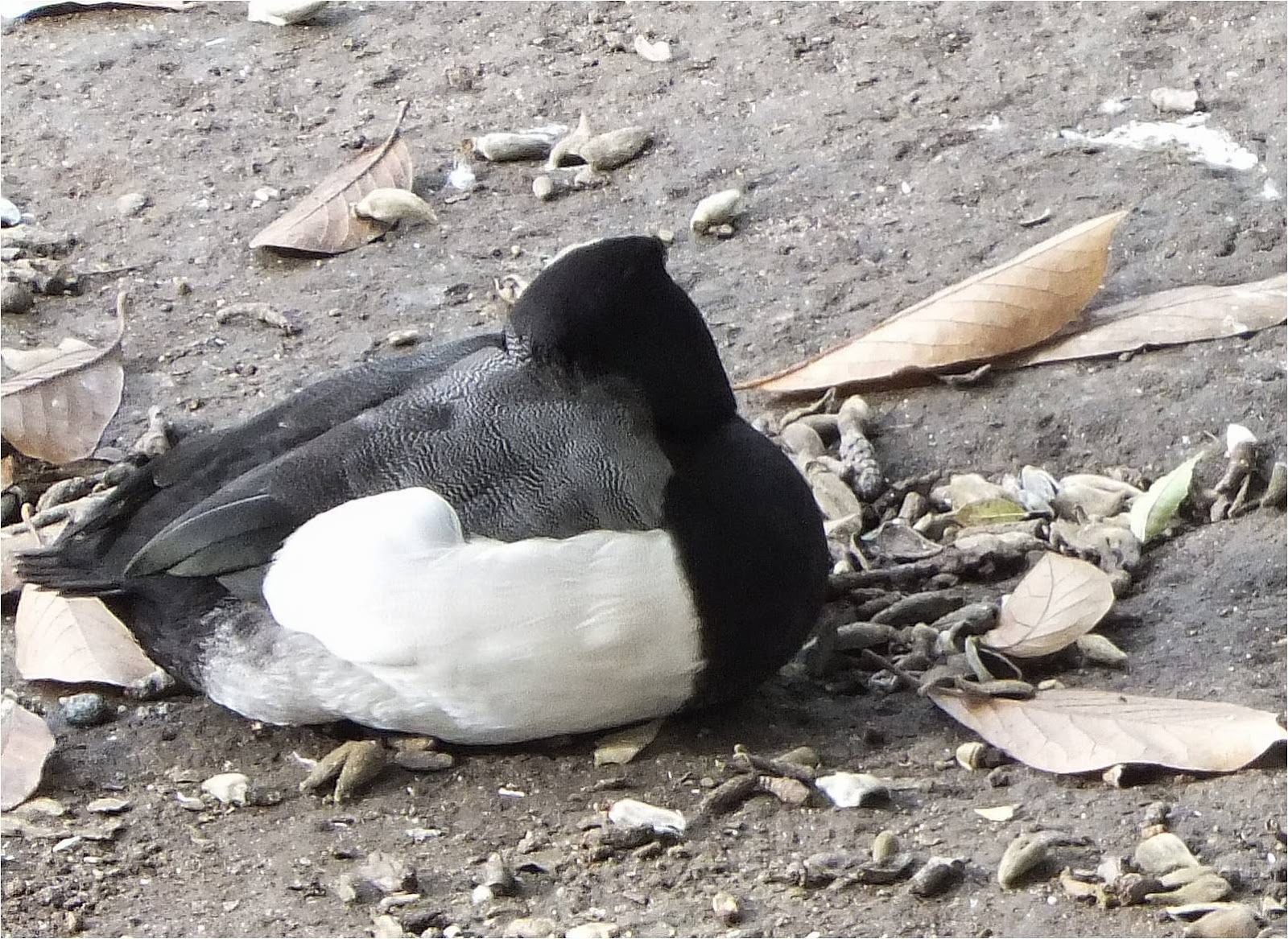 
It was interesting to see how the darkness of the upperparts on the next bird varied according to the angle of the bird and different light conditions.  When I first picked it up it looked as pale as a Scaup but quickly morphed into a darker-looking beast.  It never looked as dark as some of the photos above though.  Noticeably larger than Tufted Ducks it was accompanying making the Scaup parent Greater.  The vermiculations on the upperparts are not clearly visible in the photos but were easily seen in the field, albeit much less obvious than on either Scaup species, especially Lesser. 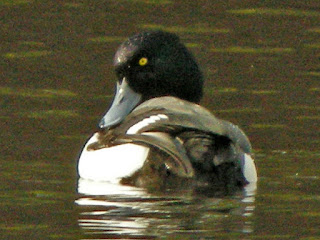 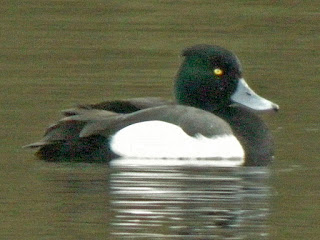 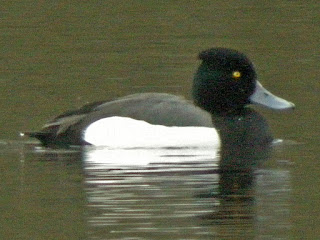 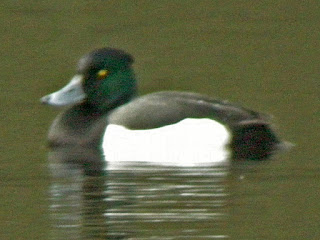 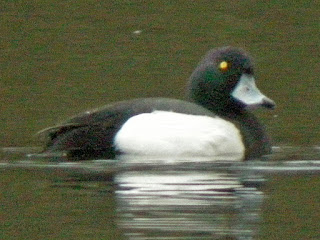 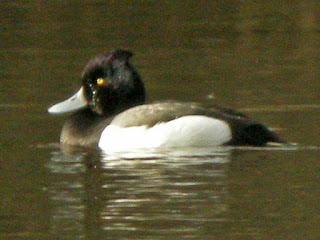 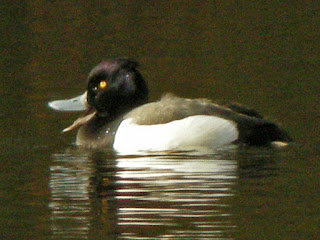 Female Tufted Ducks with a lot of white around the bill and little or no tuft showing are often touted as possible Tufted Duck x Scaup hybrids (or even misidentified as pure Scaup) but in most cases they are just Tufted Ducks.  The bird below differed from these in that I got a good clear look at the head over a period of time and its feathers were ruffled and raised sufficiently for me to establish that it certainly did not have an elongated tuft, rather than this simply not being visible.  Moreover the structure seemed quite Scaup-like, although it was as small as a Tufted Duck.  At some angles the upperparts and flanks seemed to lack any grey feathering (although they were paler than on the accompanying Tufted Ducks) but at some angles there seemed to be a distinct greyish tone to upperparts and flanks.  Some photos seem to hint at an extensive dark tip to the bill as on Tufted Duck but in the field this seemed to be lacking - it certainly was not as obvious as it often is on Tufted Duck.

Unfortunately poor light, my longest lens being away for repairs and my general lack of technical skill mean that the photos I took are all quite poor.


Next up are a male and a female on consecutive days: 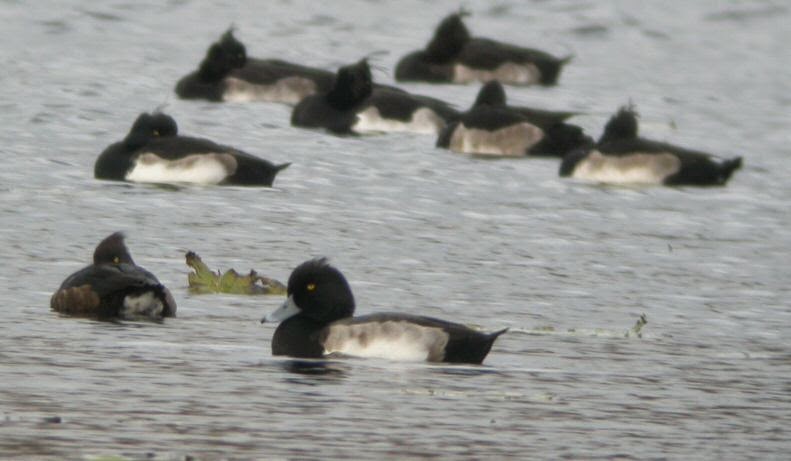 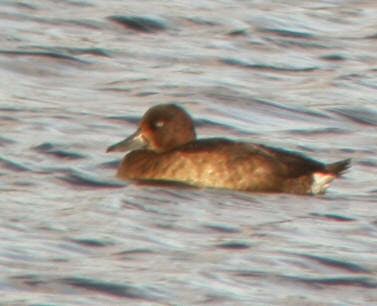