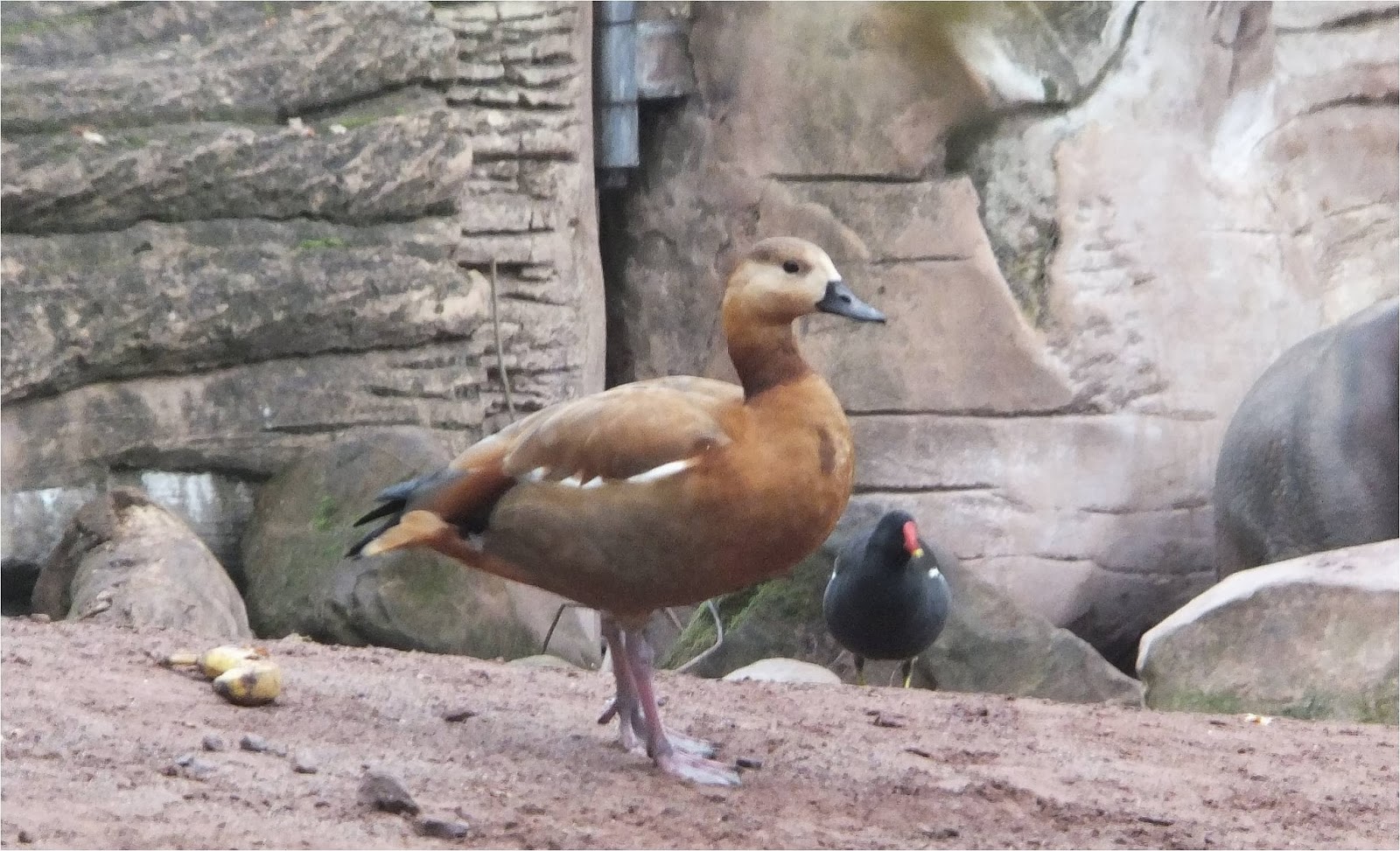 
In an earlier draft I mistakenly captioned these birds as captive, but Joern has clarified that they are the offspring of a captive pinioned male Ruddy Shelduck and a feral fully-winged female Egyptian Goose.  The hybrid young were raised by the pair and never caught and handled so far as we know.  They behave like the feral Egyptian Geese that also frequent the zoo, not overly shy, but not tame.  The remaining hybrid is not confined to the zoo but frequents other wetland areas around Hannover.

Joern draws our attention to the intermediate colours on this individual, the dirty pink legs and the broad, dark rusty-brown neck band.  The legs are longer than in Ruddy Shelduck, the bill shape is intermediate and the iris is dark.  Its presumed parents are shown in one of the photos below. 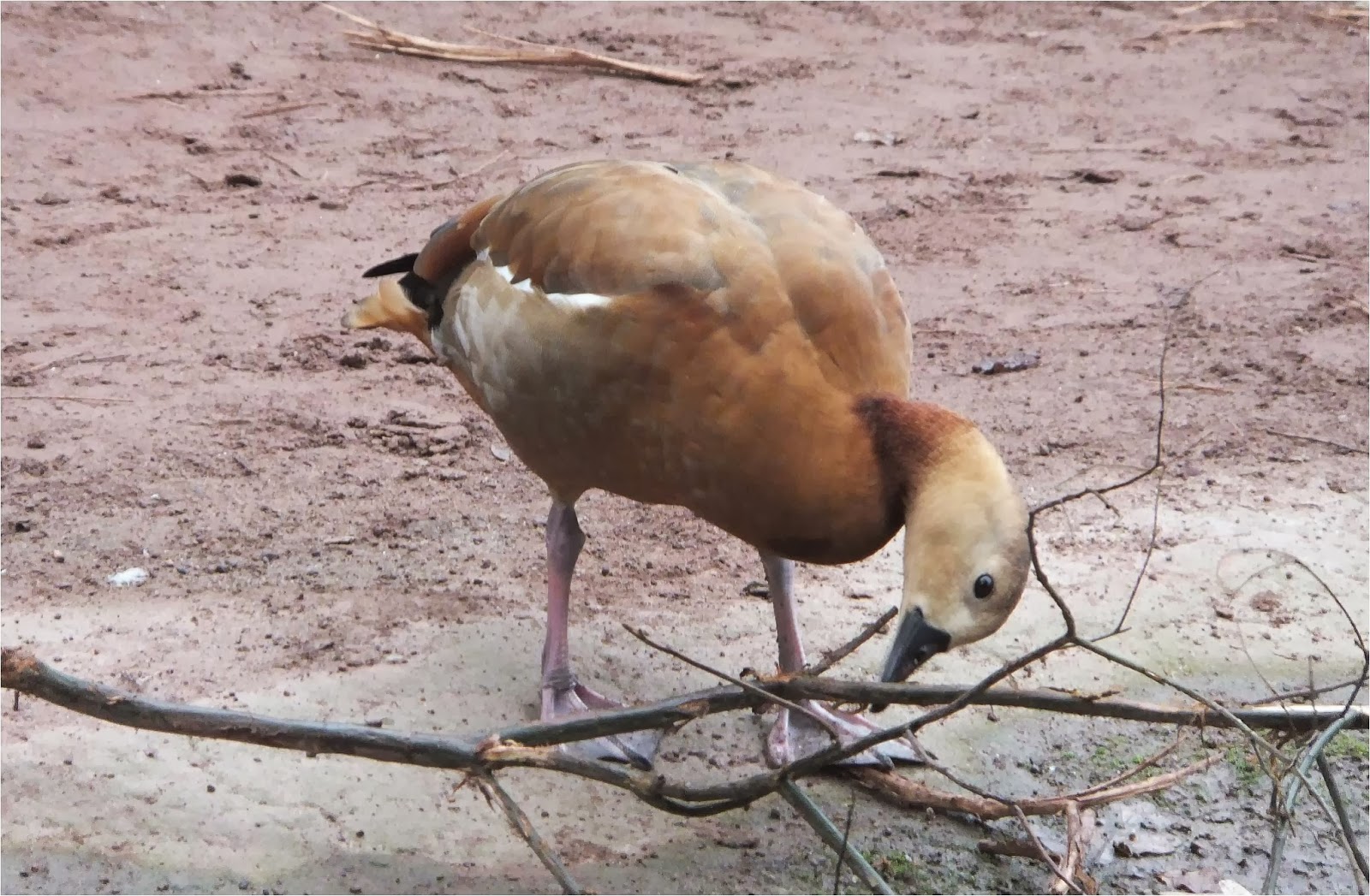 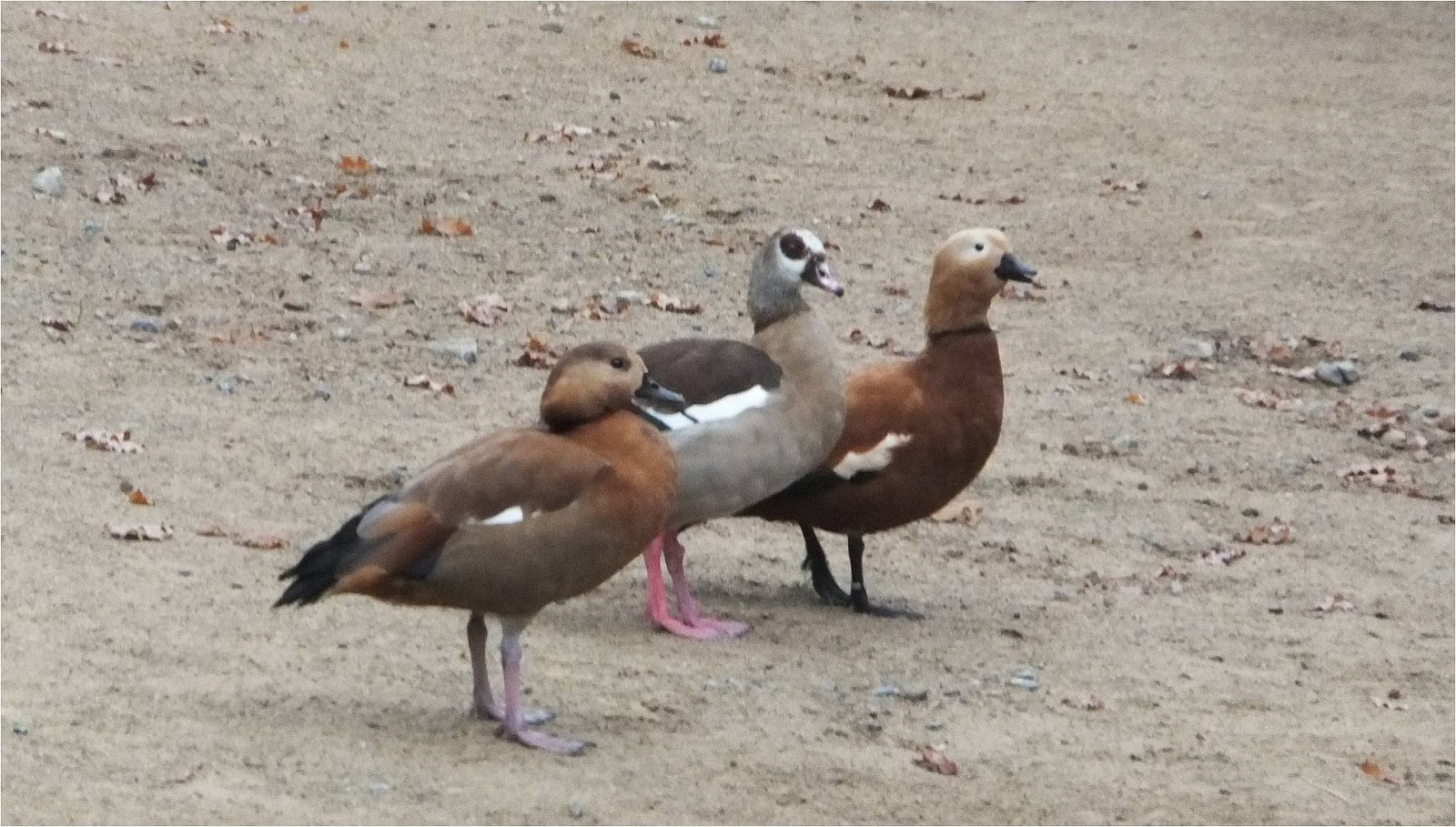 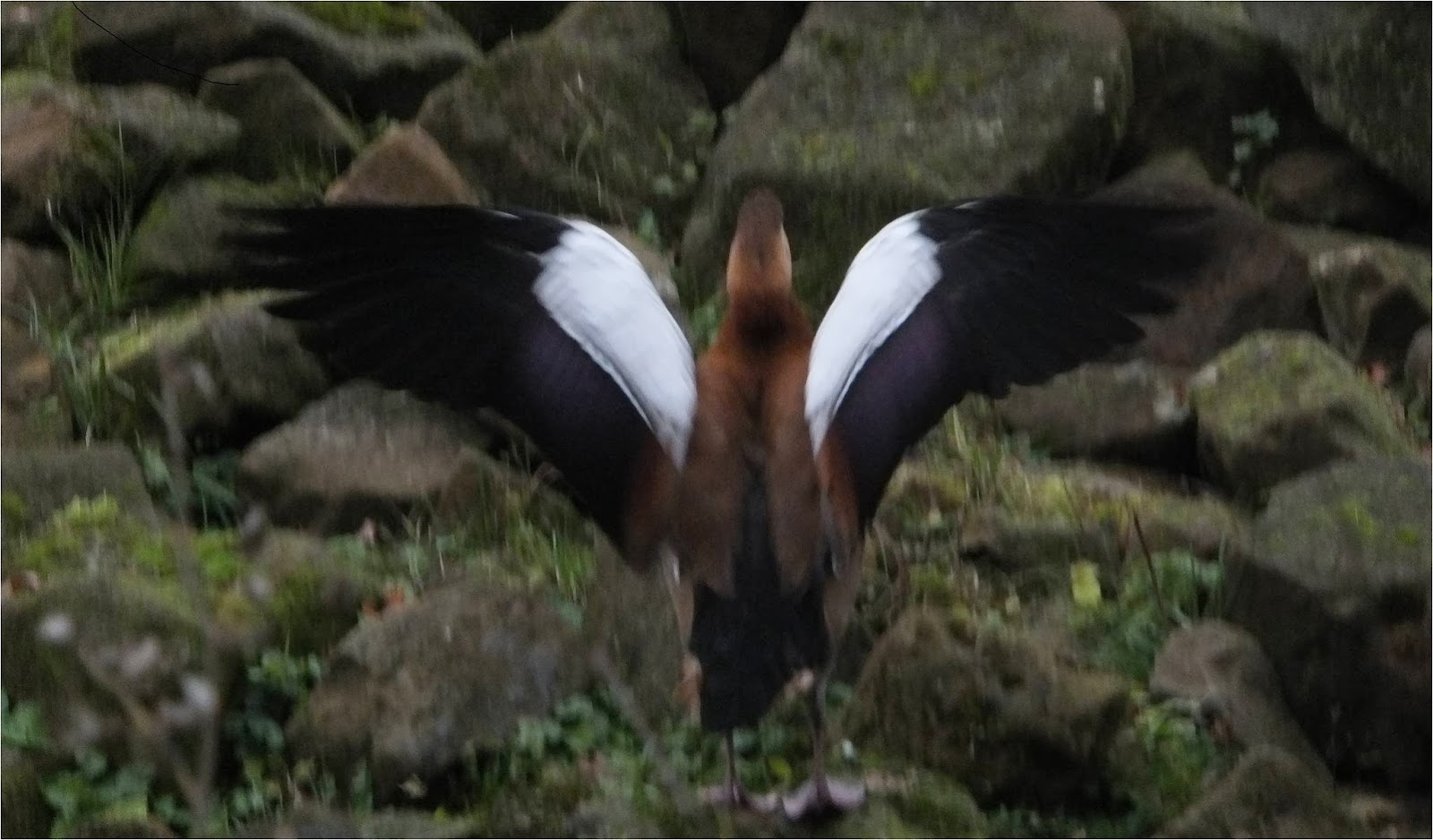 
As you can see in the above photo, the thin black stripe of Egyptian Goose on the white greater coverts is also expressed in this hybrid. 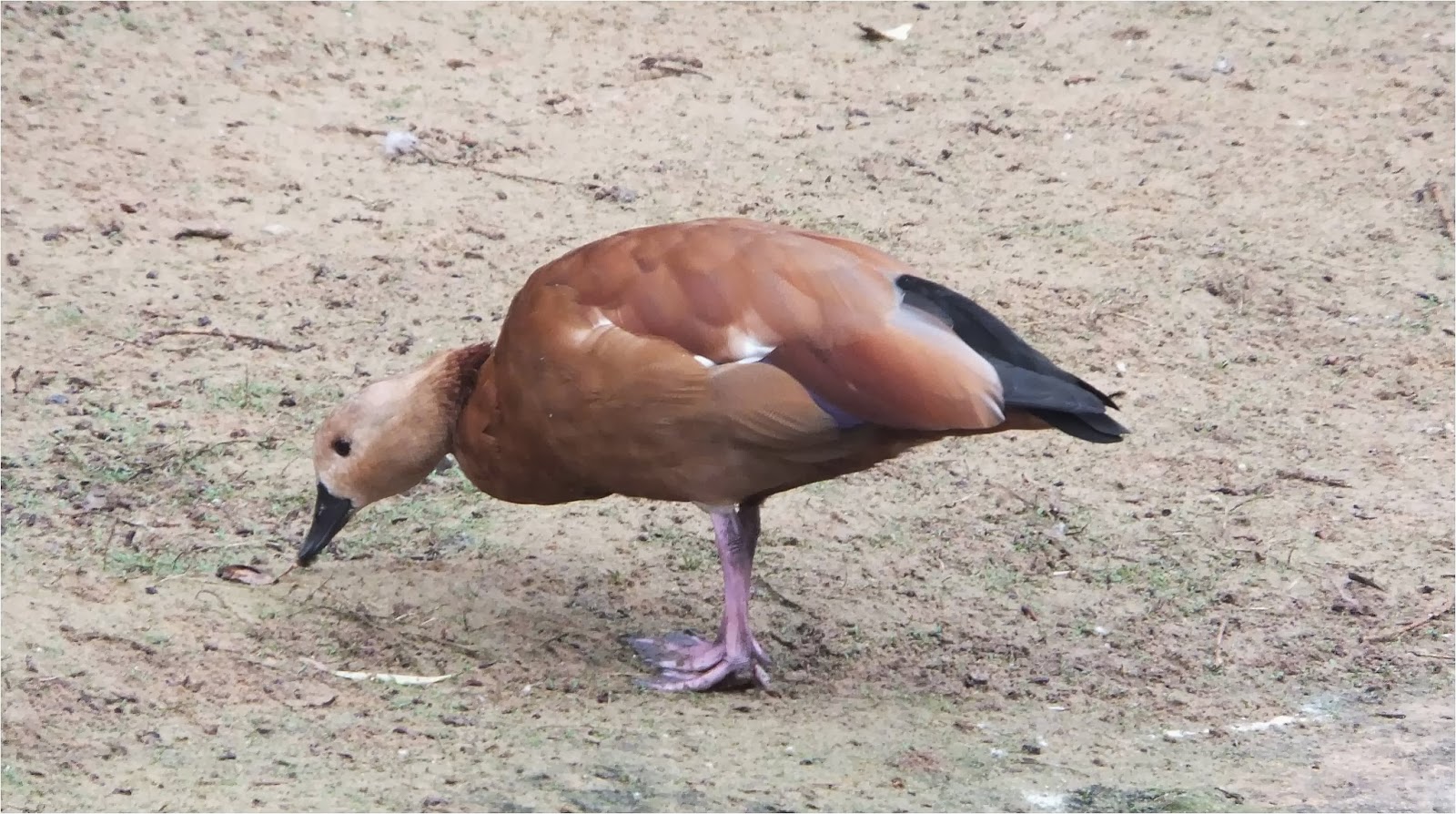 
Joern believes the next photos show the same bird. 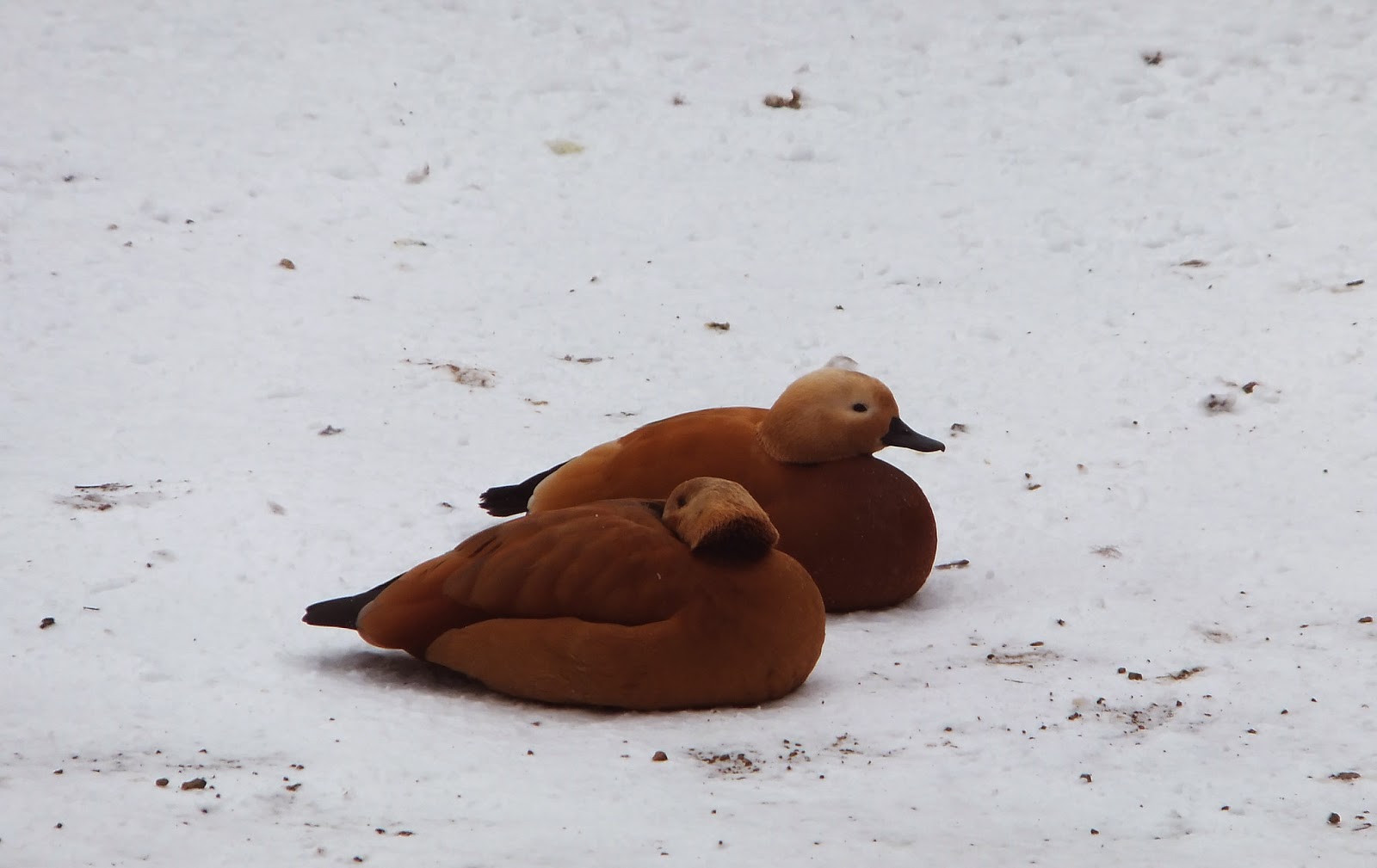 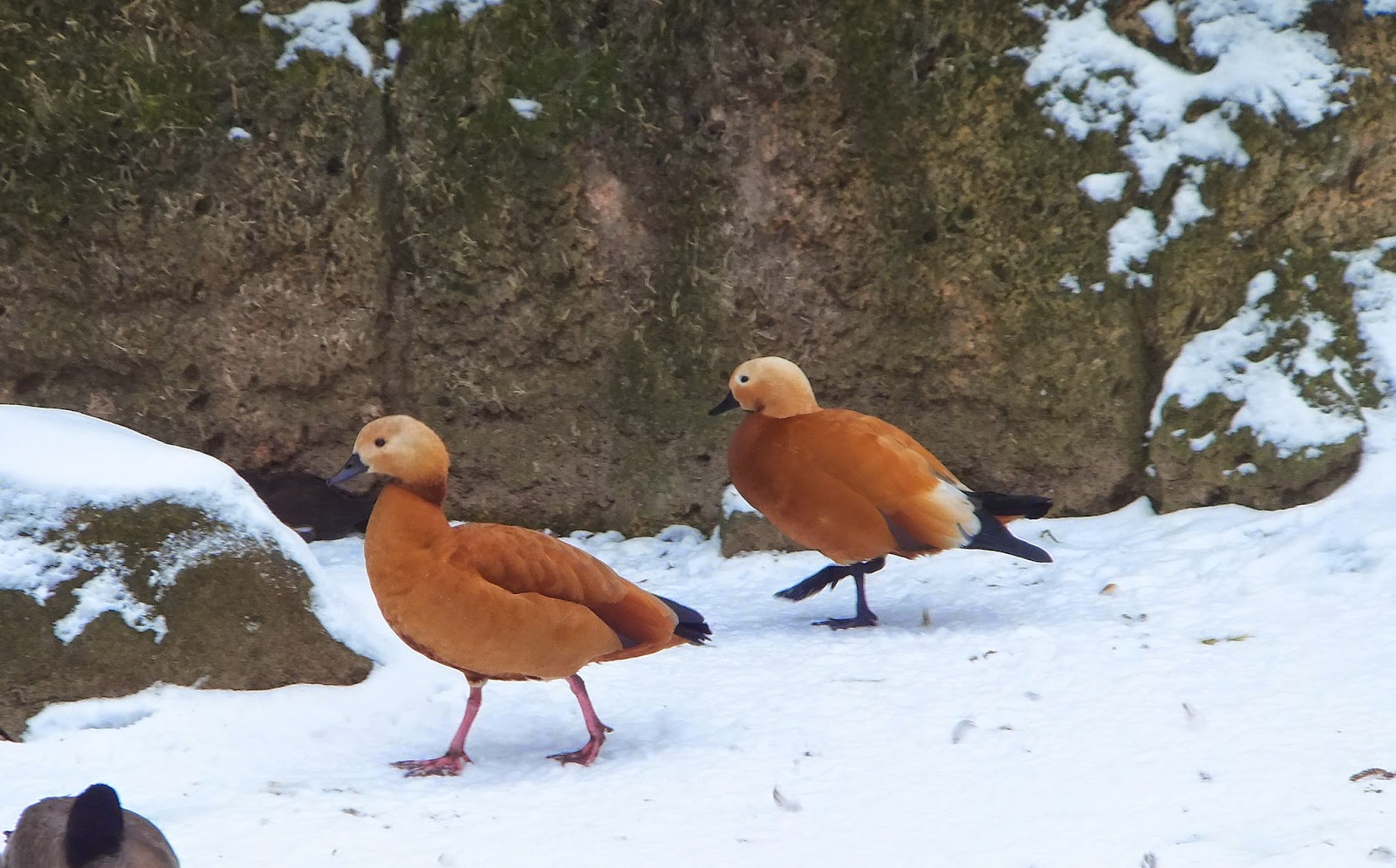 Joern draws attention to the violet speculum on the next photo - not something you might expect on a hybrid between two species that normally show green speculums (although in both species the green is irridescent and can sometimes appear violet), but I'm reminded of Tufted Duck x Ring-necked Duck hybrids which typically show green head sheen where both parents have purple head sheens.  As above, this bird shows the dark bill of a Ruddy Shelduck and pink legs more like those of an Egyptian Goose.  In this image you can also see the thin black stripe on the wing-coverts in front of the speculum which is present on Egyptian Goose but not Ruddy Shelduck. 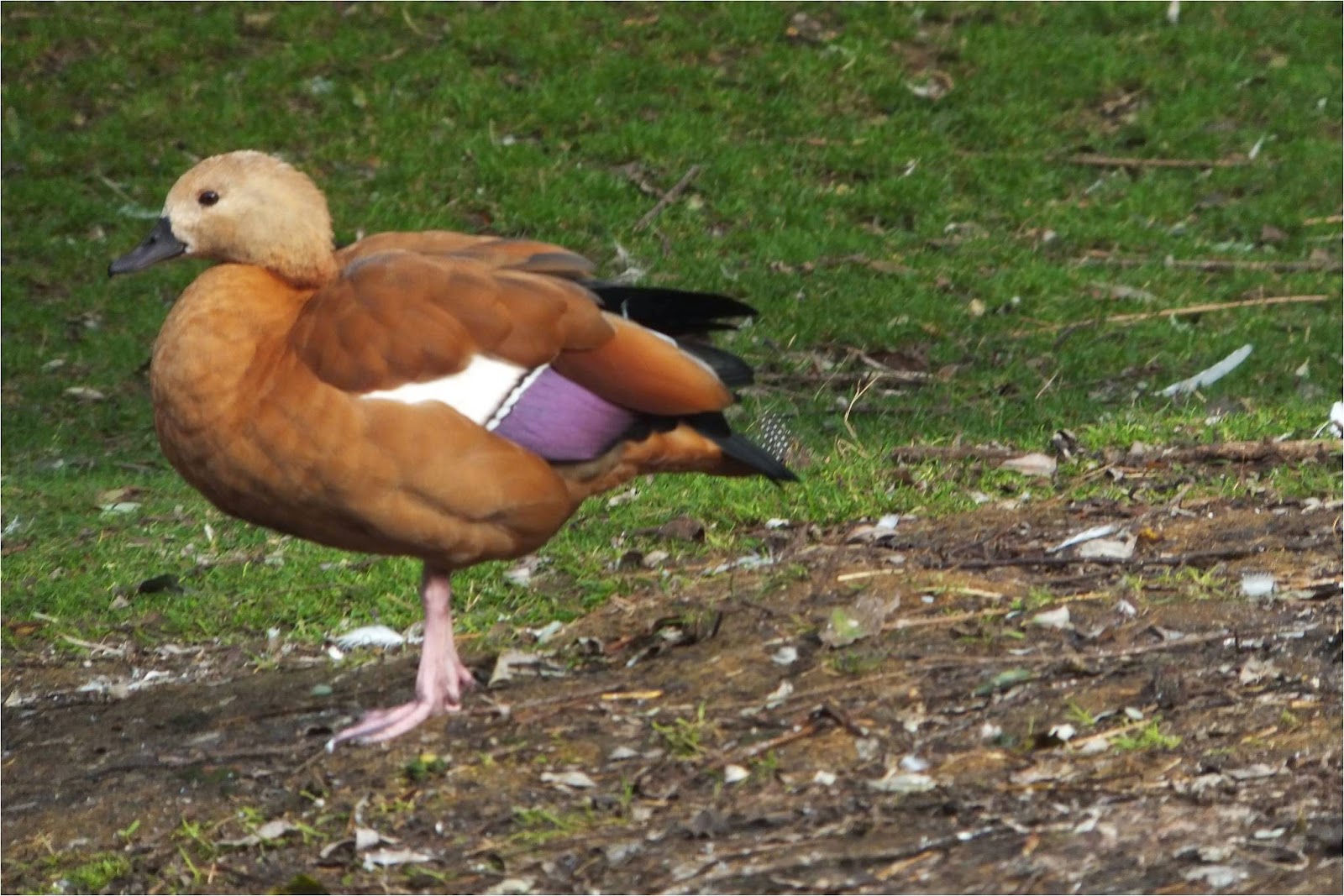 
The next bird was photographed looking into the sun, so the images aren't the best.  What was presumably the same bird was reported nearby as a Ruddy Shelduck and indeed on a casual look that mistake would be understandable. 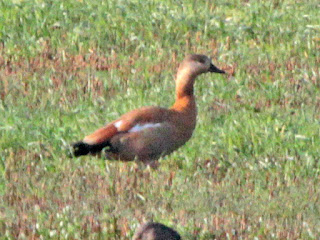 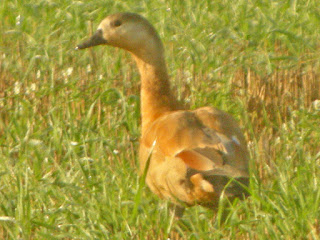 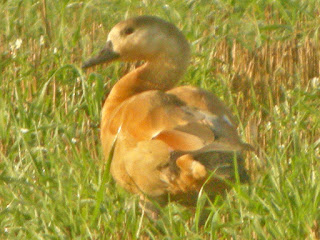 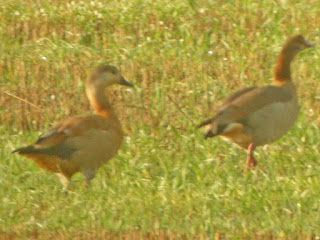 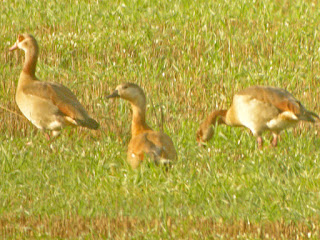 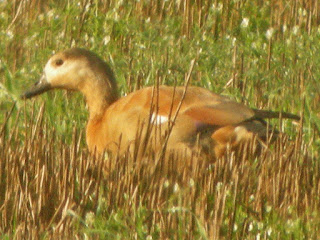 
The next bird was initially reported as a hybrid but later by more experience birders as a pure Ruddy Shelduck, but in this case it was the original finder who was correct.  The pink legs in a photo were a give-away but apart from that it did look quite a lot like a Ruddy Shelduck although different photos showed either a buffy-grey belly or buffy-grey mantle (but not both on the same image suggesting it might just be the light).  When I saw the bird in the flesh I was surprised at how orange it looked - at some angles the sides and back looked a little buffish but on good side-on views it just looked orange like a Ruddy Shelduck.  I started to wonder if I was imagining the structural and postural anomalies and whether it might indeed be a pure Ruddy Shelduck after all, with some kind of mutation giving it pink legs.  But it was a hybrid - although the tone of the back and body varied according to the angle of the bird it did look consistently paler than would be expected on a pure Ruddy Shelduck.  The head looked a lot like other Egyptian Goose x Ruddy Shelduck hybrids and that slightly Egyptian Goose-like gait was certainly there.  When I studied the photos what I thought was a black collar in the field turned out to be more reddish than I'd realised, and was quite broad with a diffuse upper border further suggesting Egytpian Goose influence.  Finally the white thighs might be significant - shown by some other Egyptian Goose x Ruddy Shelduck hybrids whereas I think they're always at least partly orange on pure Ruddy Shelduck.  The bird is paired to and has been energetically displaying to an Egyptian Goose so it shall be interesting to see if they produce backcrossed hybrid offspring - currently I am not sure if this cross-generic hybrid can be fertile or not. 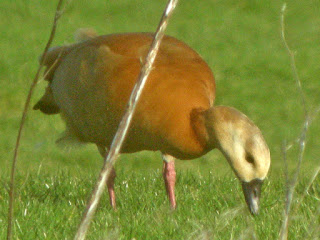 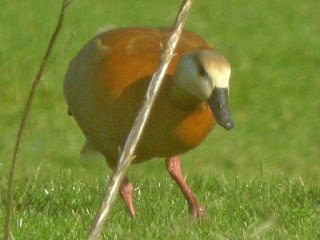 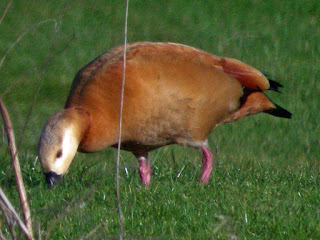 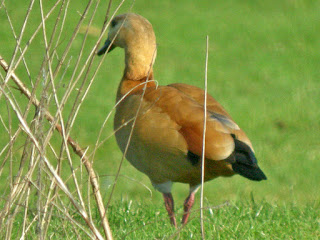 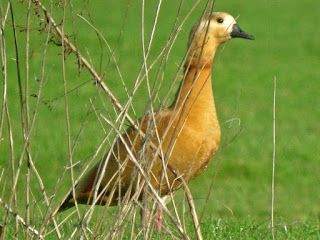 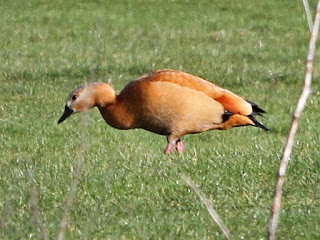 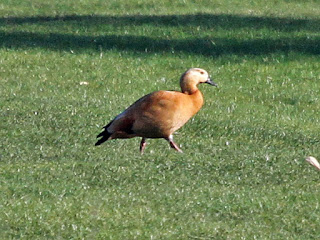 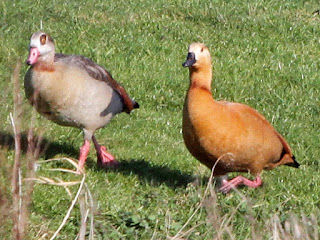 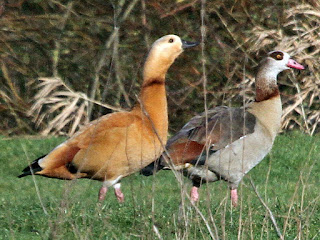