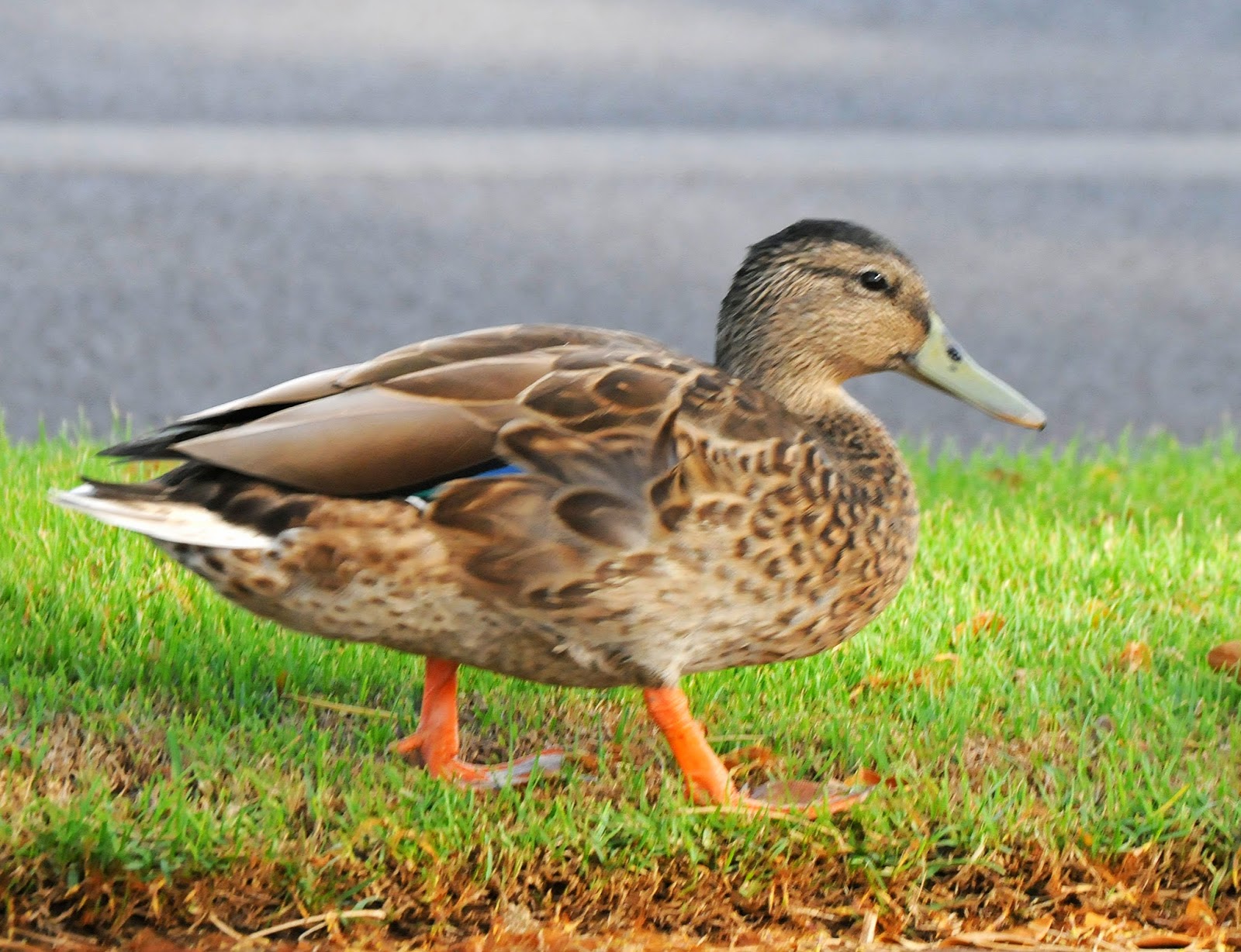 
Hawaiian Duck is listed as Endangered because it is "inferred to have a very small and fragmented range on a few islands, where wetlands are being lost and degraded, and where hybridisation is slowly reducing the number of pure individuals" (source: BirdLife International). Introduced Mallards are the problem - the two species are closely related and hybrids are fertile.

Important note: Andy Engilis has been in touch with Steve with regard to one of his Mallard x Mexican Duck hybrids to say that research his team have been conducting is showing that a lot of plumage attributed to hybrids in Hawaiian, Mexican and Florida Mottled Duck are incorrect.  We await publication of this research but in the meantime some caution would be advised. 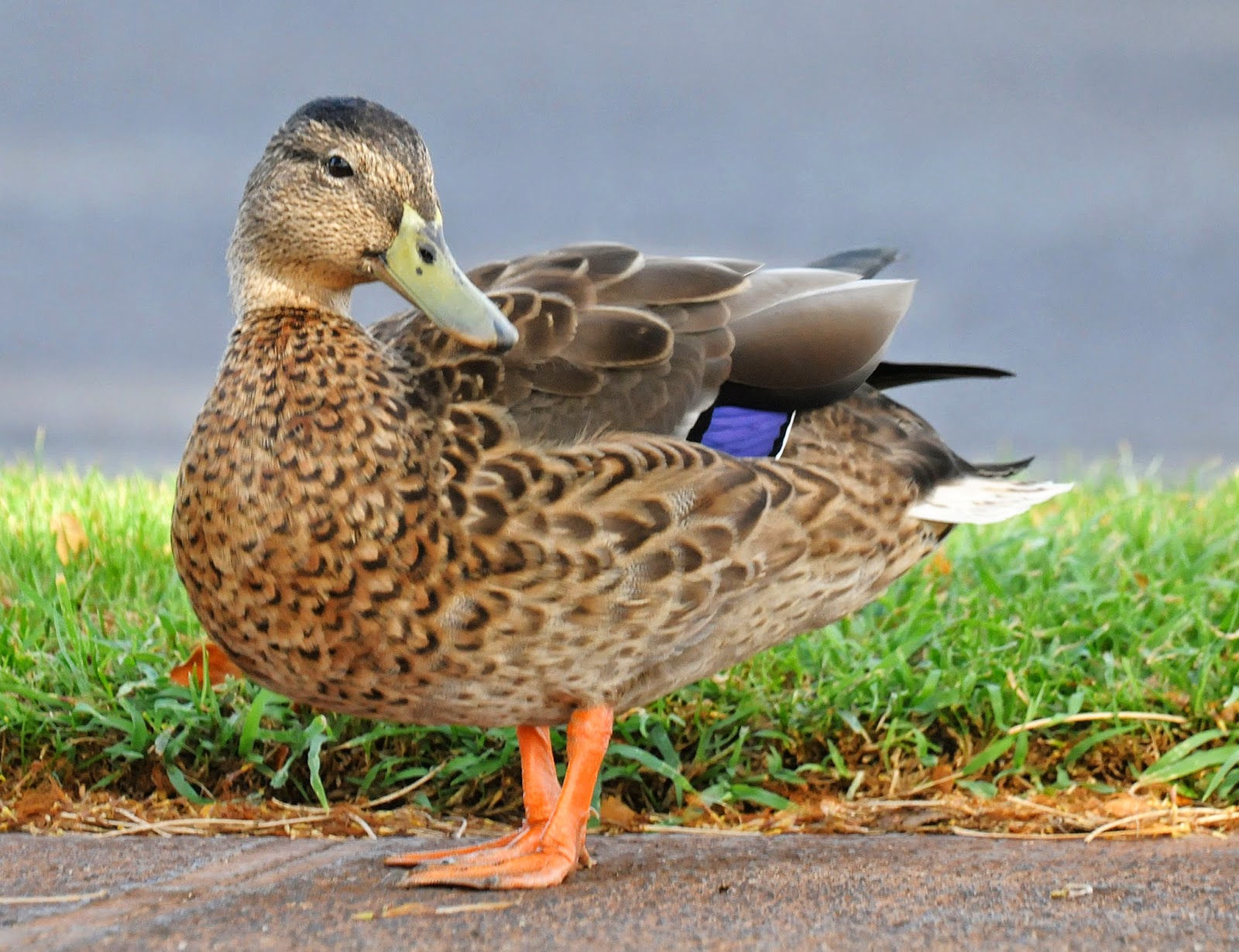 
Some of the following birds are very close to Hawaiian Duck in appearance.  Steve points to the slightly curled central upper tail coverts giving away their hybrid origins on some of them.  Other features he notes on some are the unmarked whitish on the outer tail, the belly on the third photo being perhaps a little too pale and unmarked and the fourth one being too grey and lacking an eye-ring. 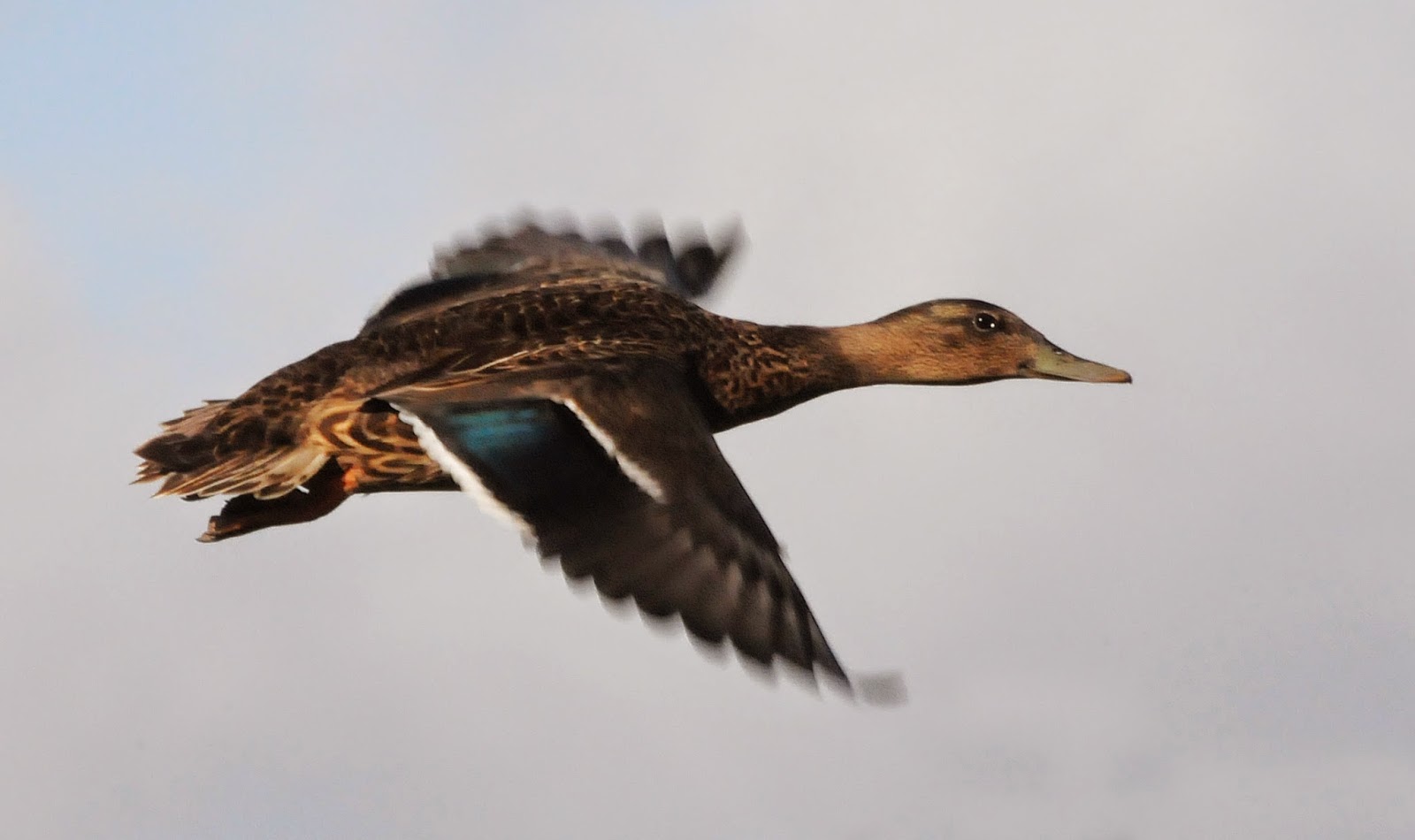 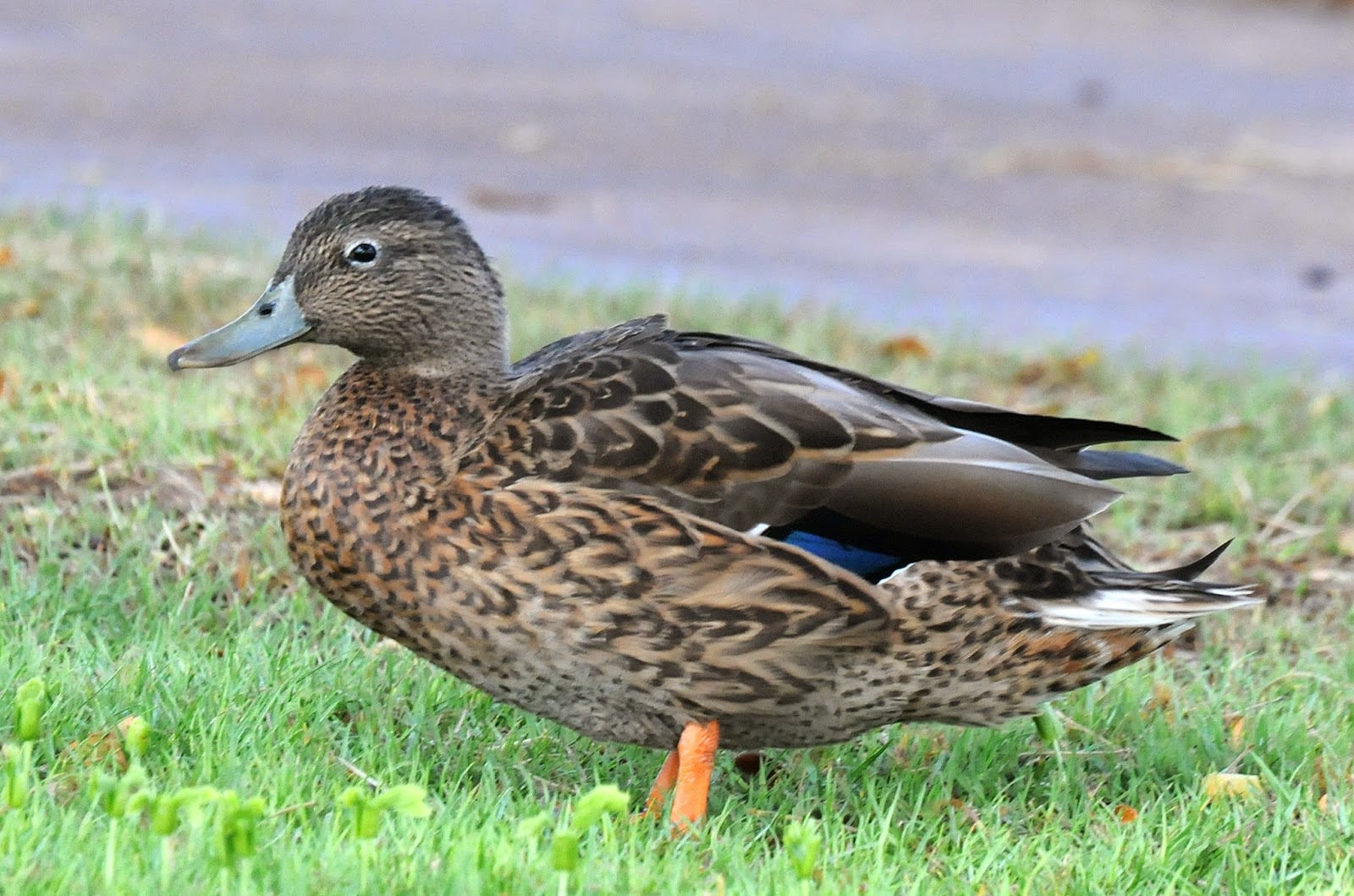 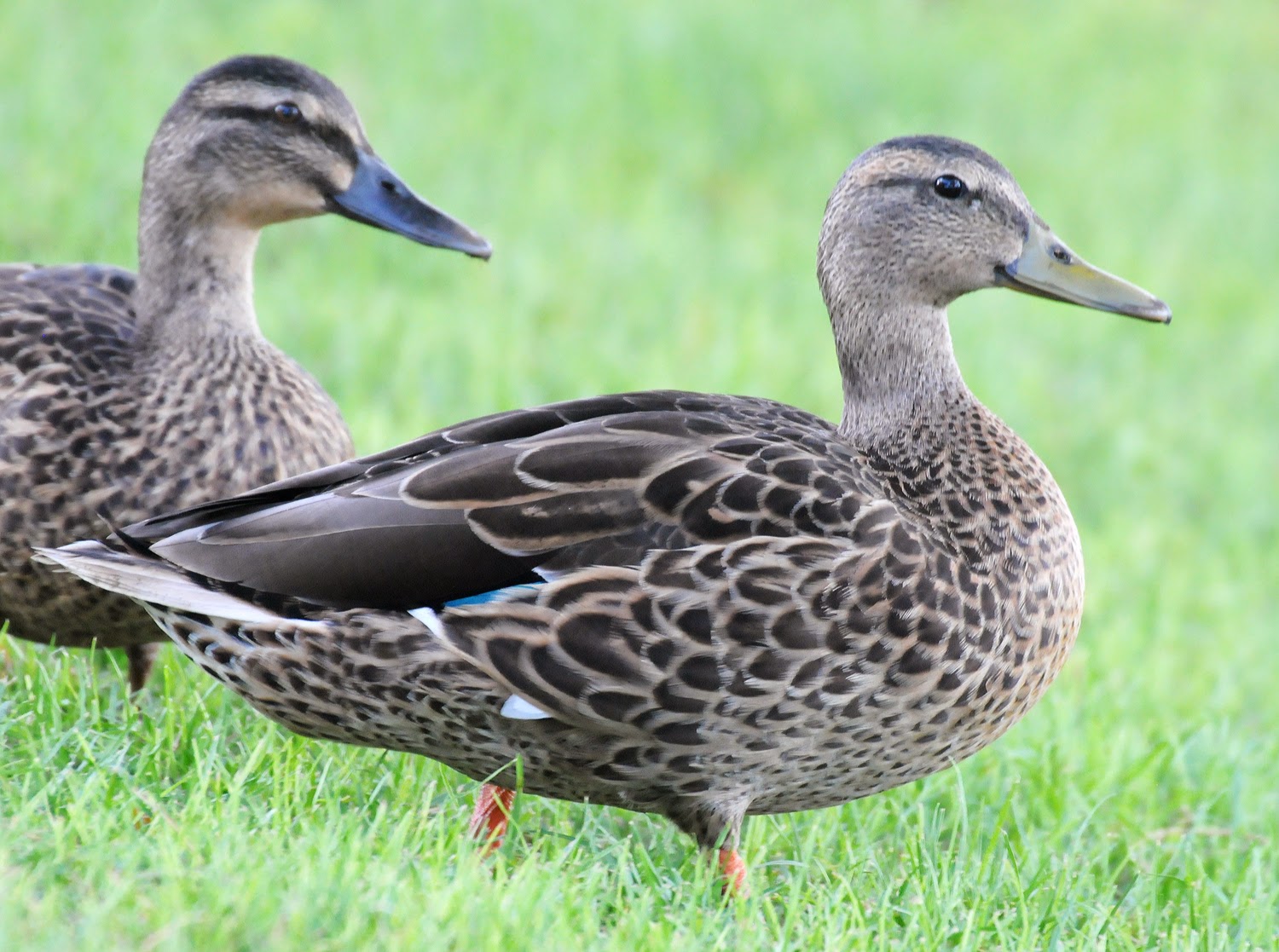 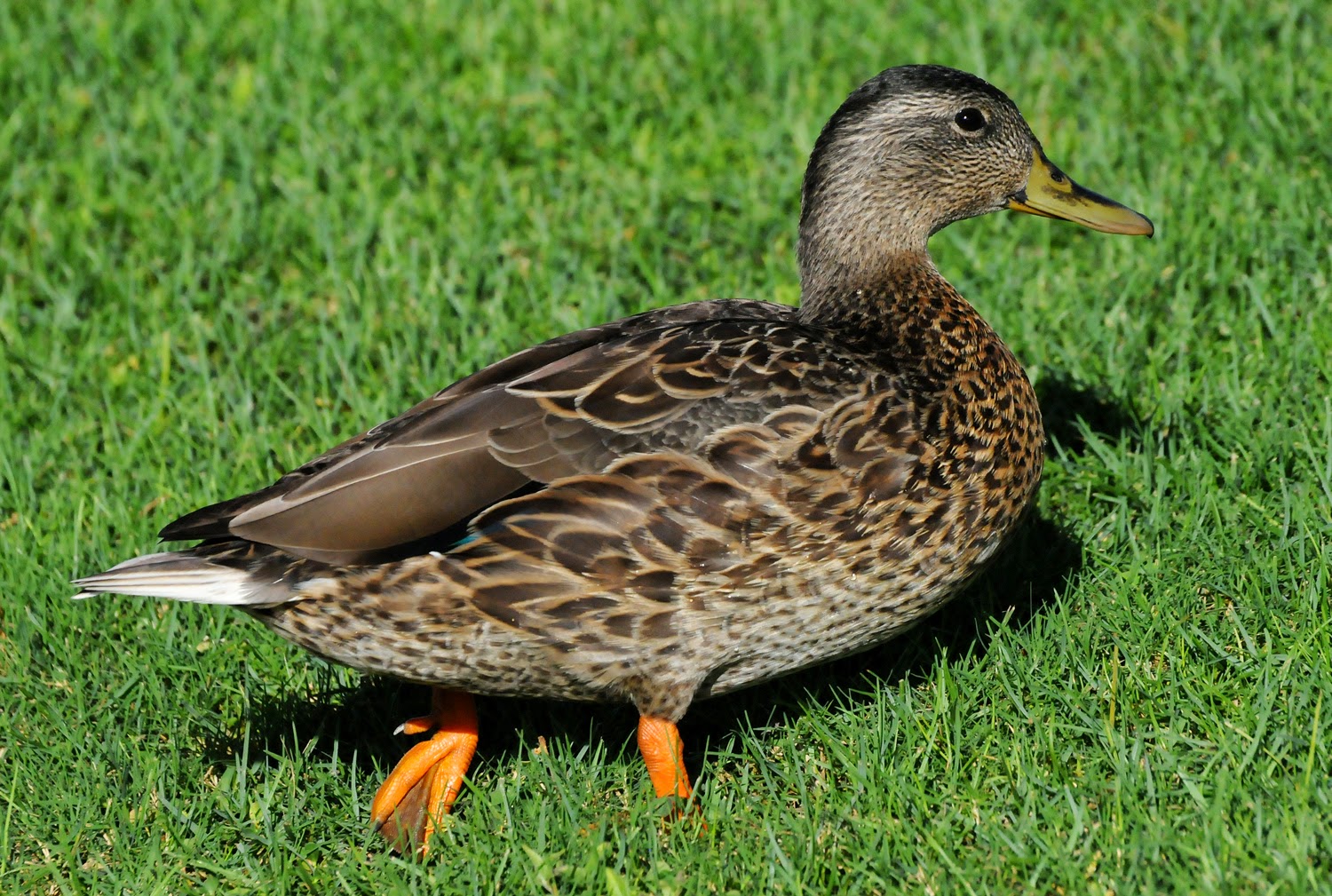 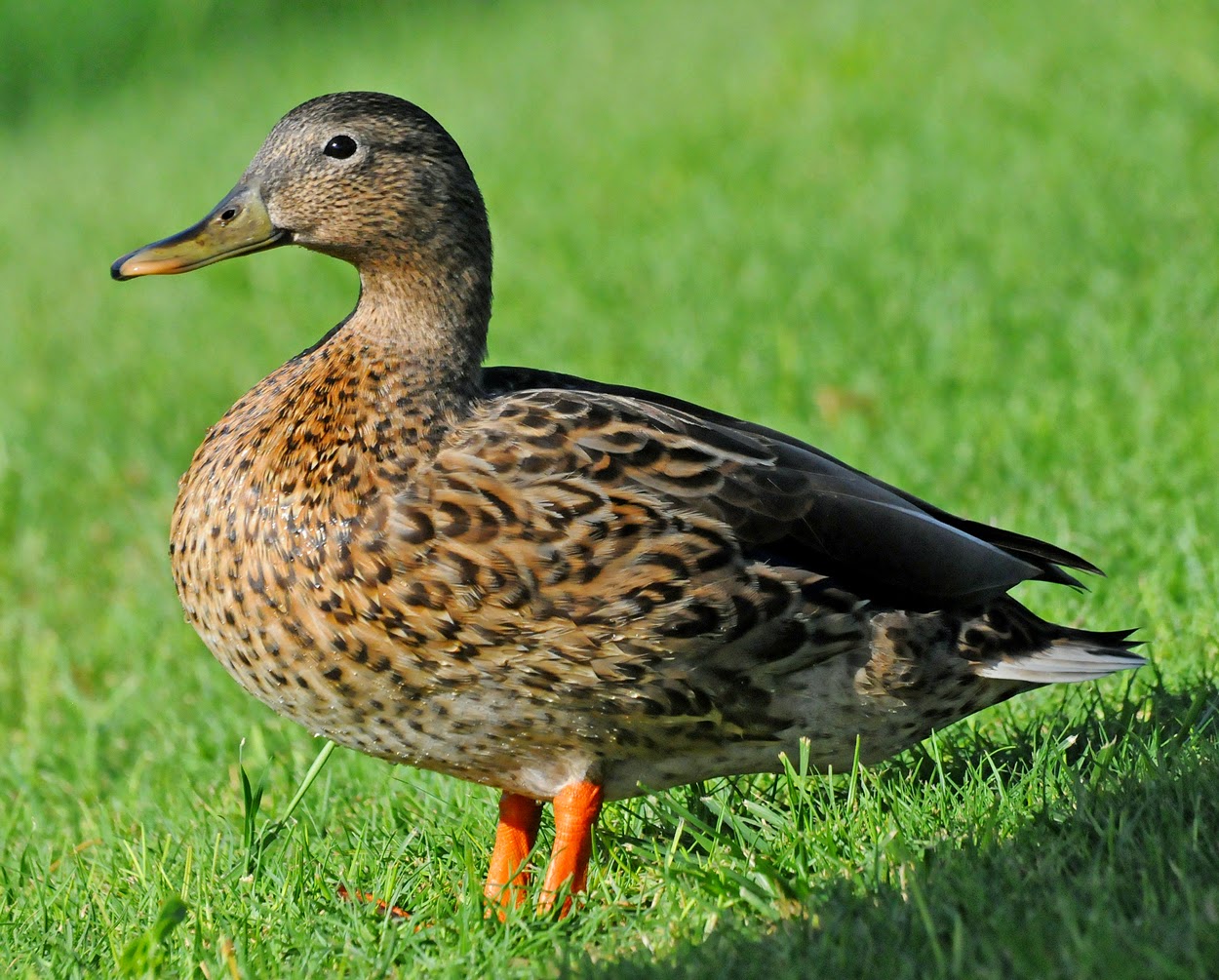 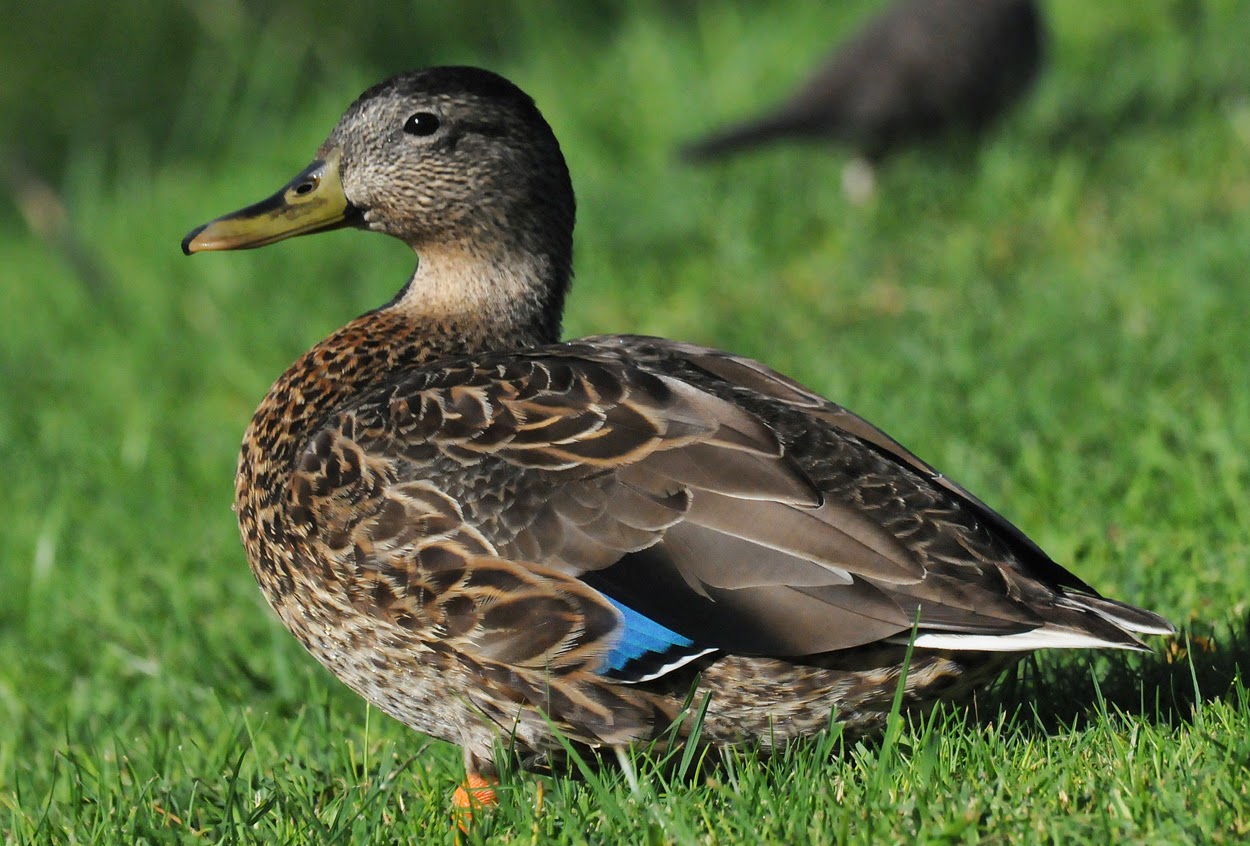 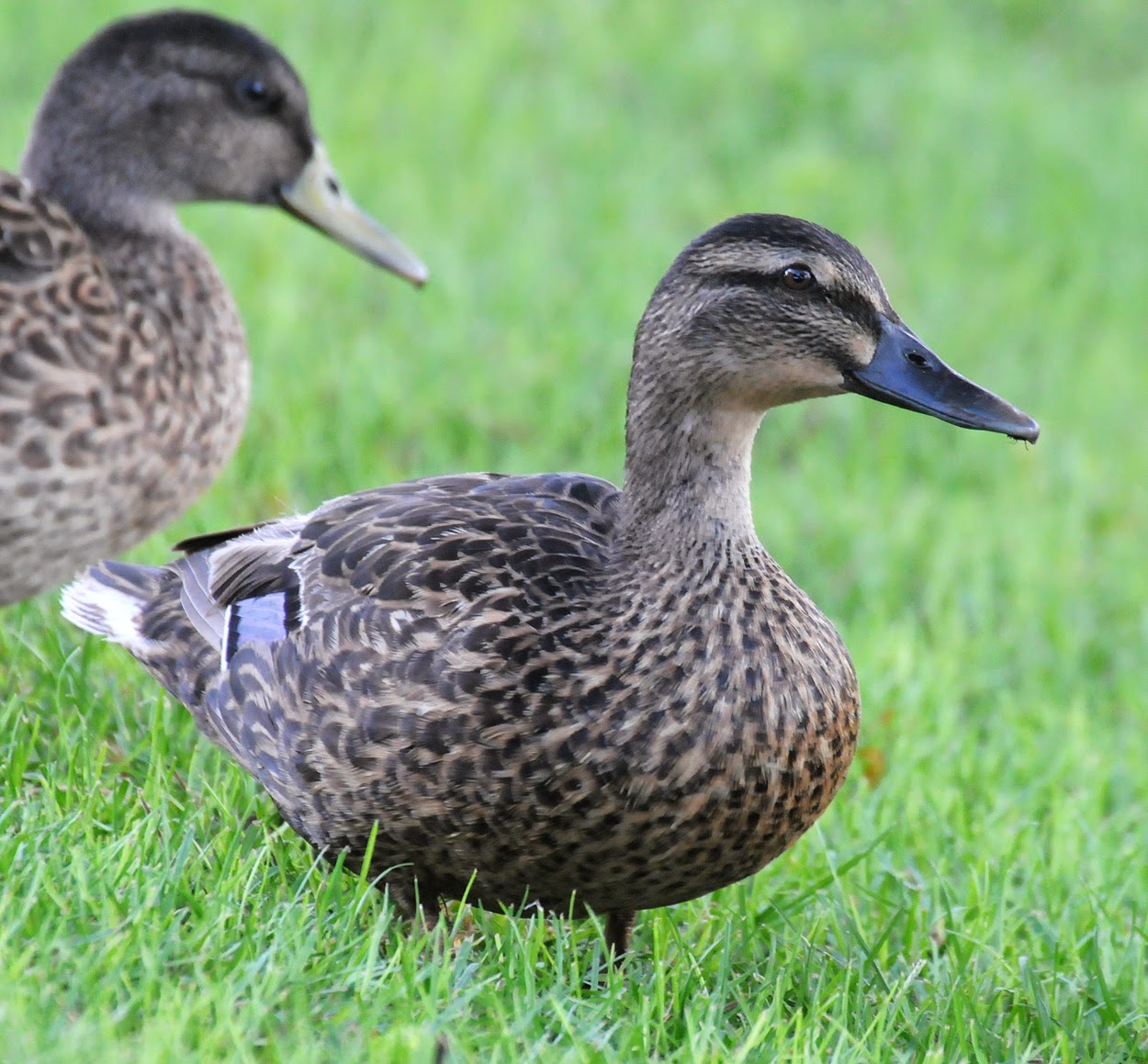 
The next bird is extremely close to Hawaiian Duck, phenotypically.  Steve advises:


"Note that this bird has dark central tail feathers (well, you can't quite see that at this angle), at least one of which is curled up. Contrastingly dark central tail feathers with a bit of curl is evidence of Mallard heritage not only in (male) birds appearing to be Hawaiian Duck, but in birds appearing to be Mottled Ducks and Mexican Ducks as well."

He goes on to say, crediting the Birds of North America Online resource for some of the details,


"First of all these birds look small and dark compared to Mallards. The size is hard to discern in this pic, but the "pure" Hawaiian Ducks appeared almost Wood Duck like in size, and more pointed front and aft, which is hard to explain.  Perhaps the tail is shaped differently or proportionately longer?  The bill is narrower, and I think head proportionately smaller, probably giving the more pointy look up front).  The darker color is a rich "chestnut" brown.

Looking at details, the chest (even in females) tends to be darker than the rest of the bird, the undertail coverts are moderately marked instead of white, the tail grayish tail, and the bill dusky, often with some with orange at tip and blackish markings on culmen.  Hawaiian Ducks have chestnut internal markings on back and flanks feathers.  Most Hawaiian Ducks also have prominent eyerings, though not all do.  The bill of Hawaiian Ducks is typically narrower than that of Mallard, and this bird's bill appeared somewhat narrow in field, though not in photo.

Apparently, all Hawaiian-type Ducks on Oahu have some Mallard genes.  The speculum of Hawaiian Duck is supposed to be "emerald" green, and this bird's speculum is clearly not that green.  Many photos online of supposedly pure Hawaiian Ducks have speculums this color or with even less green... noting that the apparent color of this iridescent area does change with light.  The photo in Birds of North America on-line shows a bird with a "teal" colored speculum." 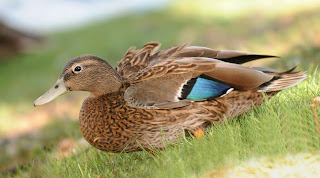 
At Halle Zoo in Germany they breed Hawaiian Ducks but Joern tells us that this bird was with free-flying Mallards.  This bird's size was as that of female Mallards but Joern points out that the speculum appeared slightly more greenish than in the adjacent mallards.  He also notes the greenish-yellow bill and slightly upturned covert in the middle of the tail. 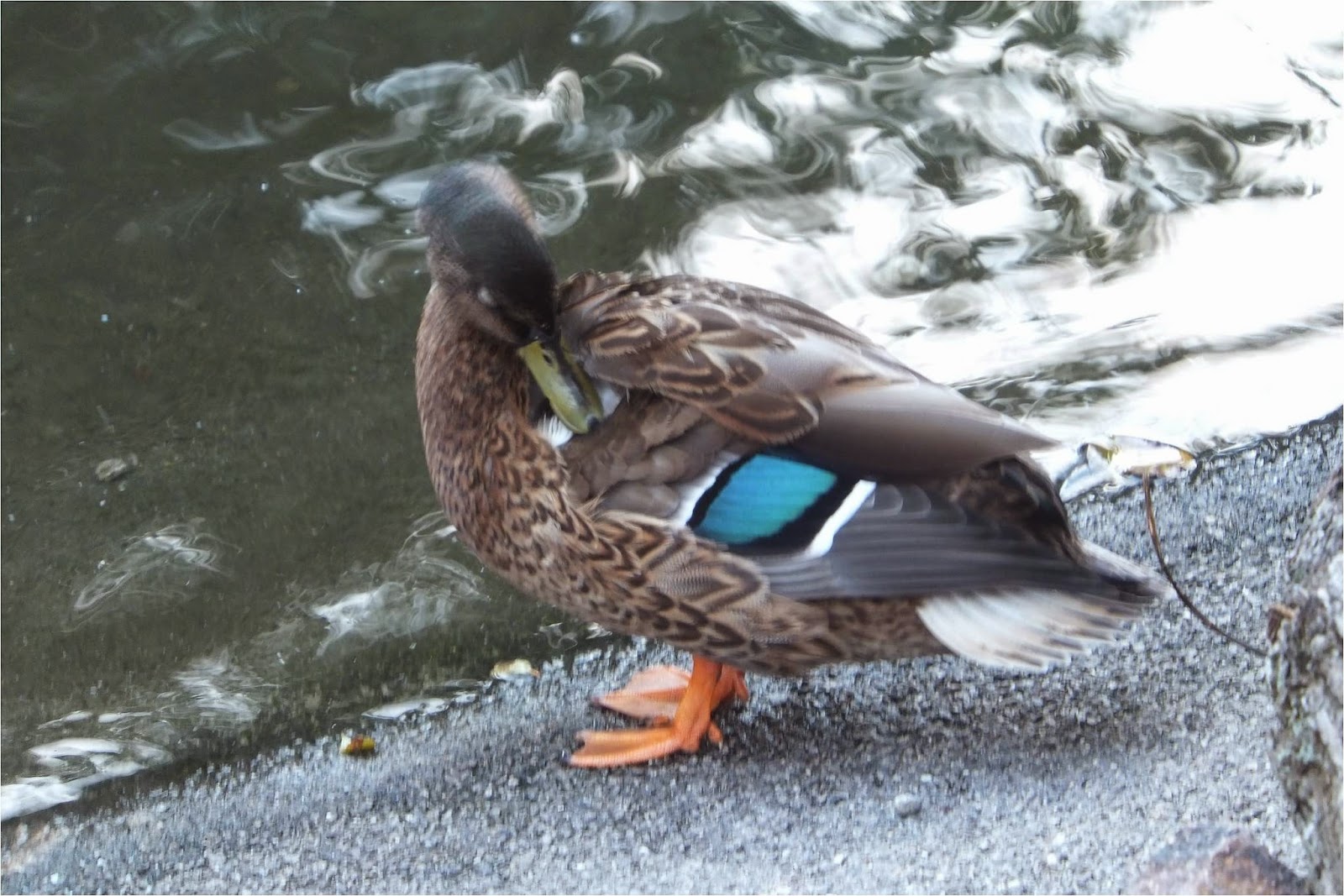 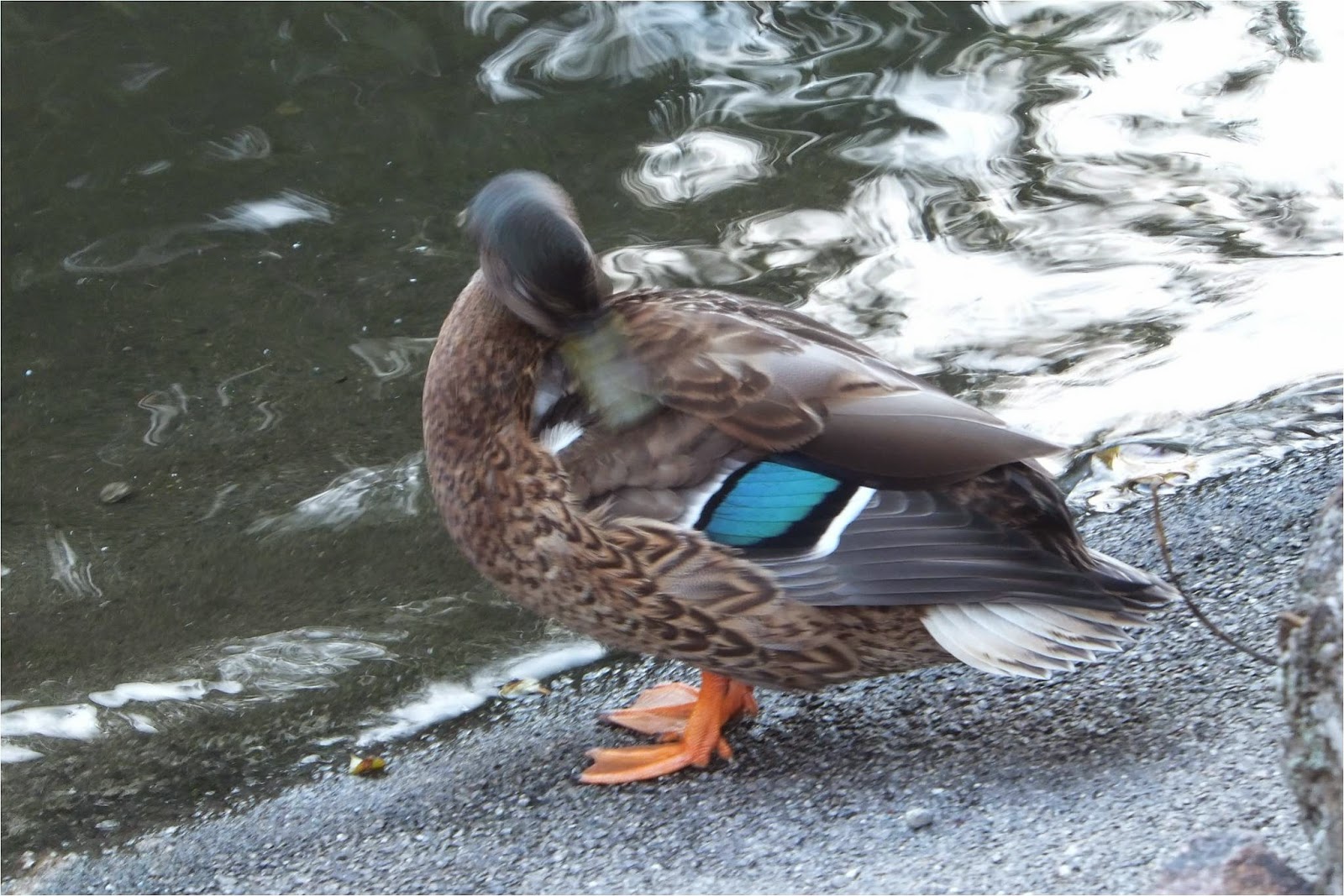 
Joern tells us that the next ringed bird was about the size of a female mallard, but with a much darker, greener speculum, a generally darker appearance than an average female mallard, a grey-green bill and nearly black uppertail coverts.  There is also not a mallard curl but a slightly upcurved black feather above the tail. 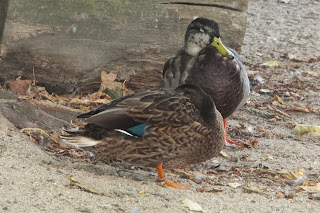 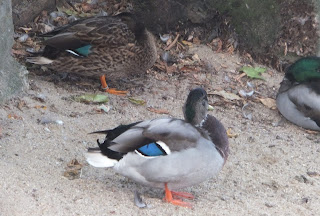 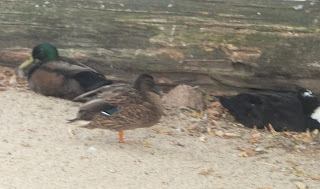 
Steve Mlodinow suggested to Joern that the next bird may have a little bit of Mallard ancestry due to very white tail feathers.  It is much smaller than a Mallard and in most respects very like Hawaiian duck, so certainly not a first generation hybrid but something with mainly Hawaiian Duck genes. 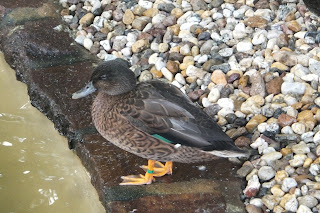