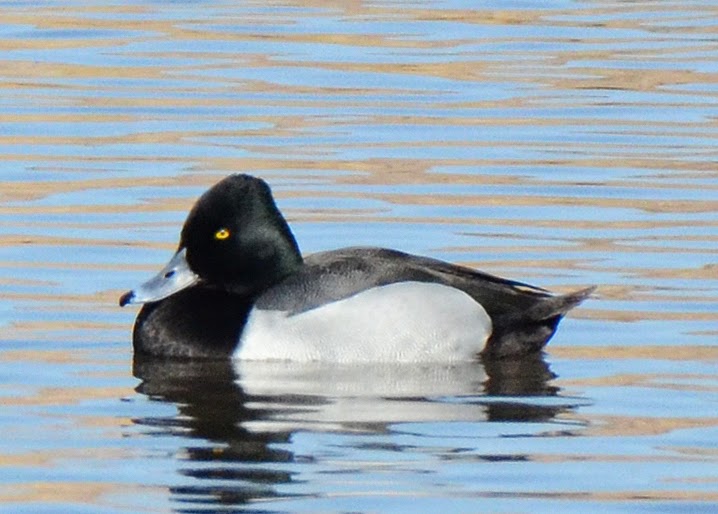 
The bill tip pattern is very unusual on this bird with the black on the nail extending up the centre of the bill slightly but not along the sides at all - best seen in the face-on shot below.  Steve also notes the dark and fairly solid (but not black) back, even pale grey sides, duskier than that of Scaup but without white "shoulder" stripe of Ring-necked Duck.  The head shape is rather like Ring-necked Duck, and the head was consistently green which is apparently unlike other hybrids of this sort that Steve had seen.  However, it lacks anything in head size, body size, or head shape to indicate that the Scaup parent was Greater rather than Lesser.  Indeed a green head colour should not be taken to infer a green-sheened parent species as a green sheen is normal for Ring-necked Duck x Tufted Duck hybrids, in which both parent species normally show a purple sheen. 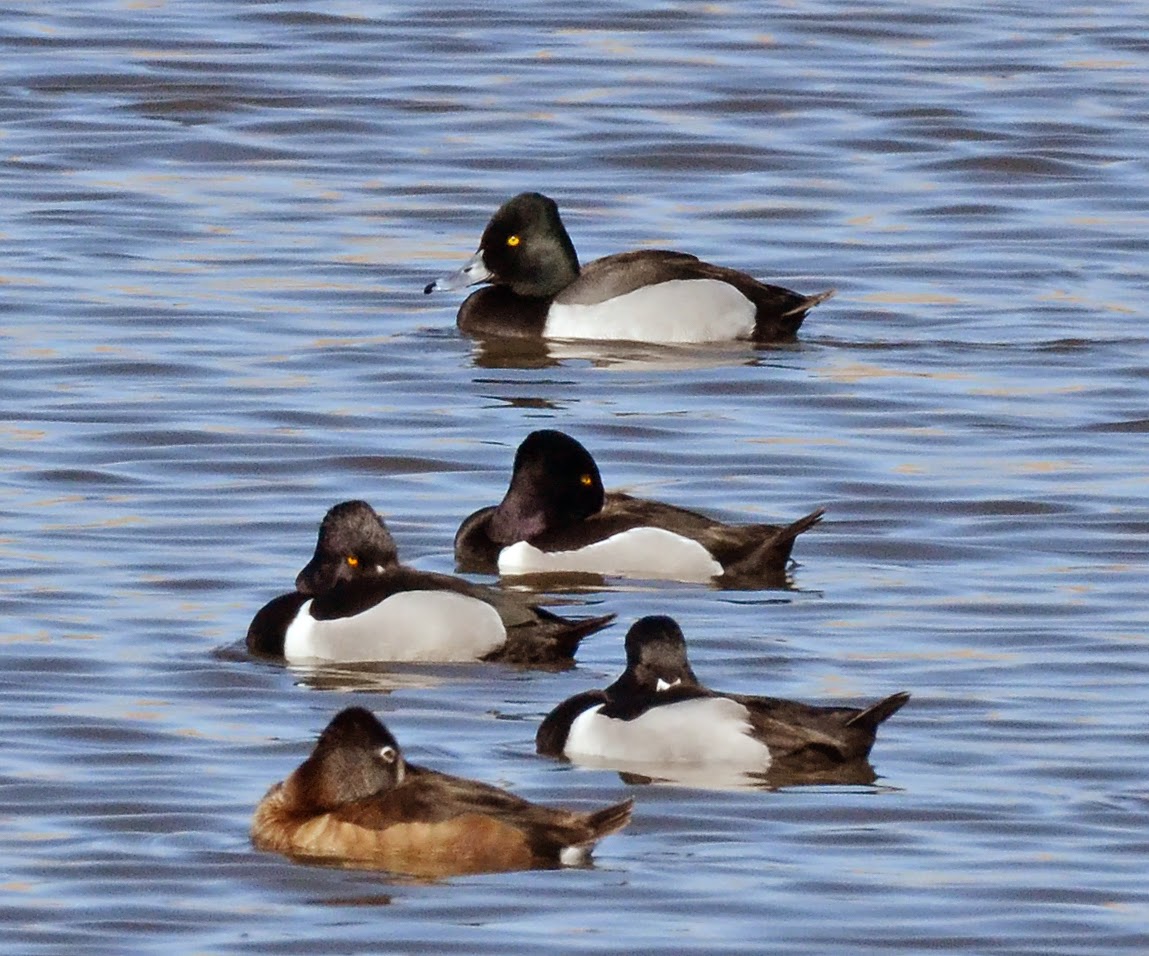 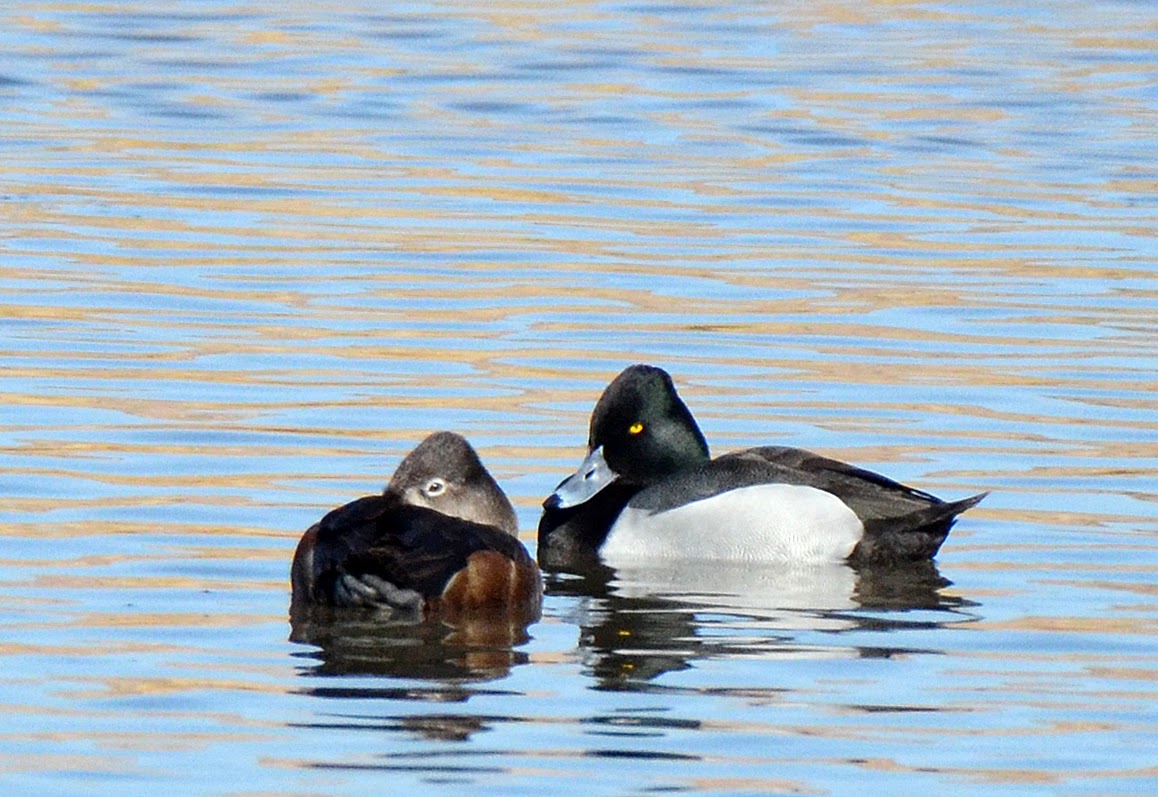 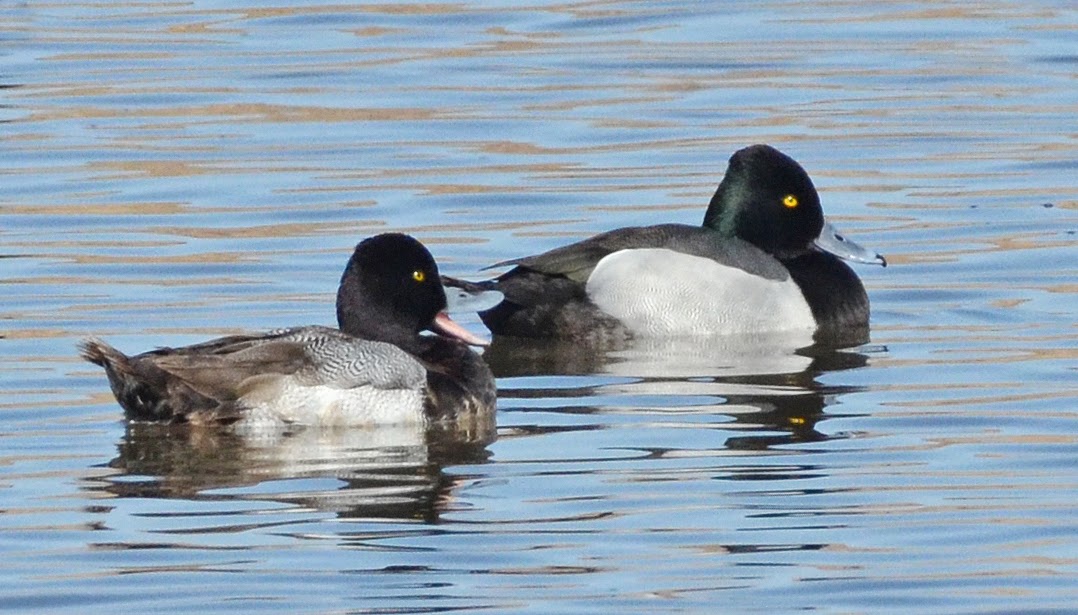 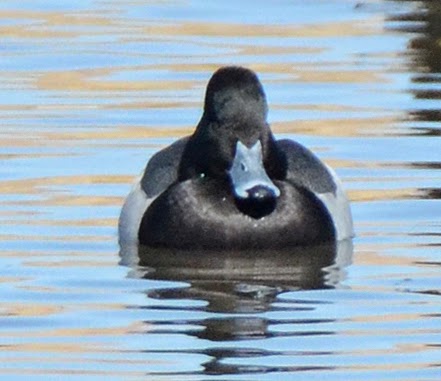 For the next bird Steve draws our attention to the mostly Ring-necked Duck head shape, the pale subterminal band on bill (like Ring-necked Duck) but the reduced pale band at the base of the bill.  The back color is intermediate between Ring-necked Duck and Lesser Scaup and in his experience the back colour, head shape and bill pattern are typical of this hybrid.  The bottom photo showing the stretched wing, with a sharp contrast between the white on the secondaries and grey on the primaries, provides confirmation that the Scaup parent is indeed Lesser Scaup and not Greater Scaup. 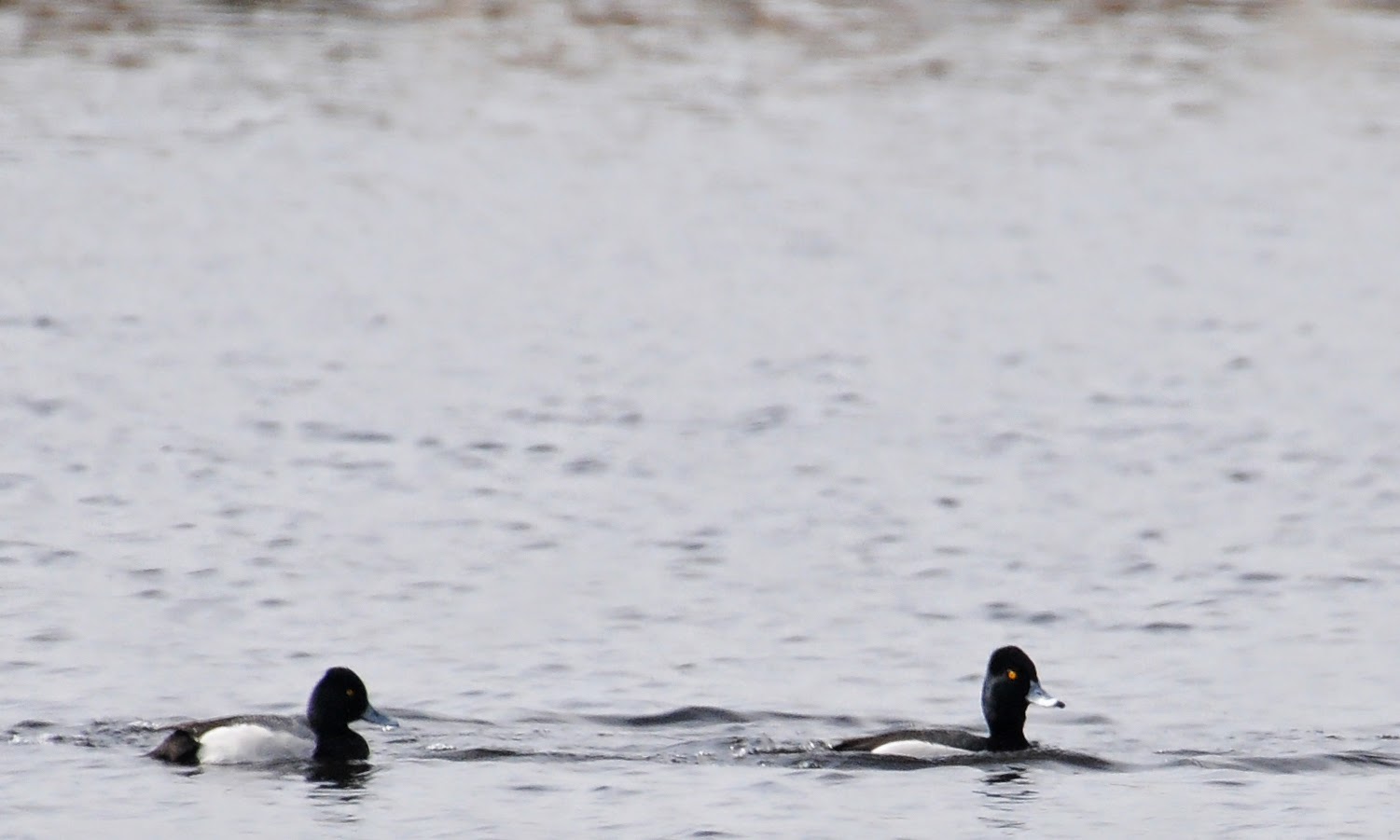 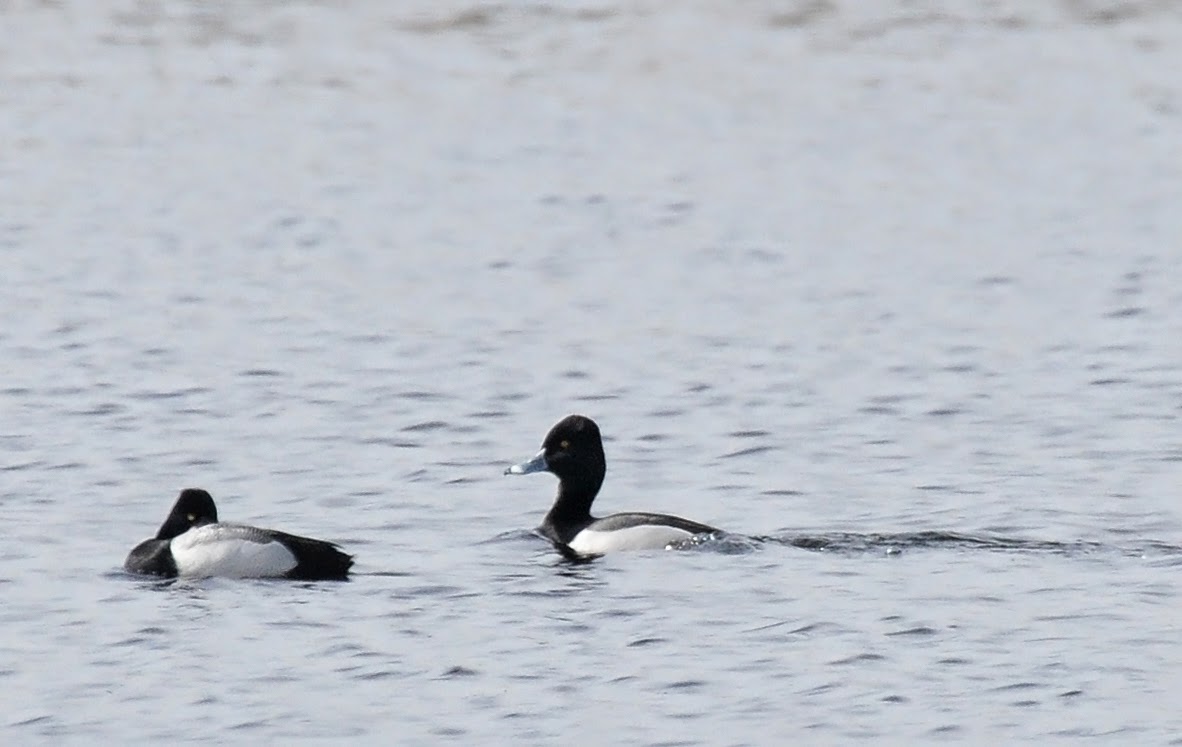 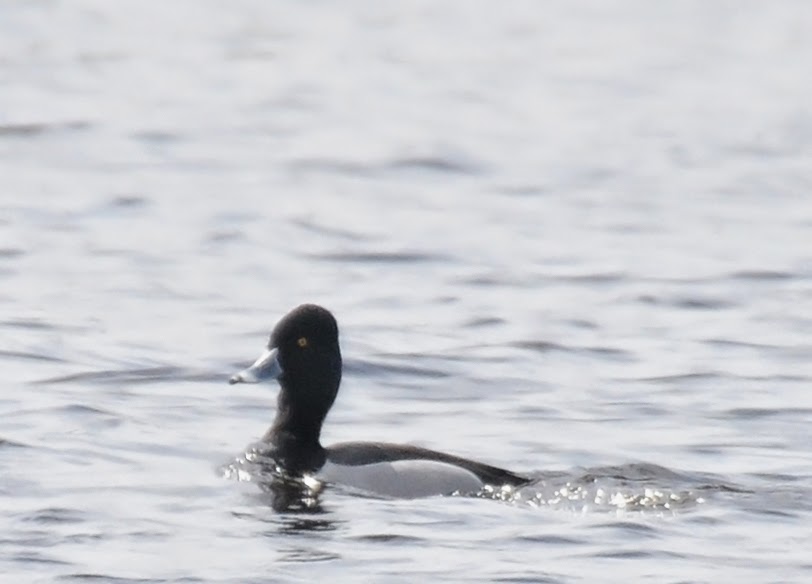 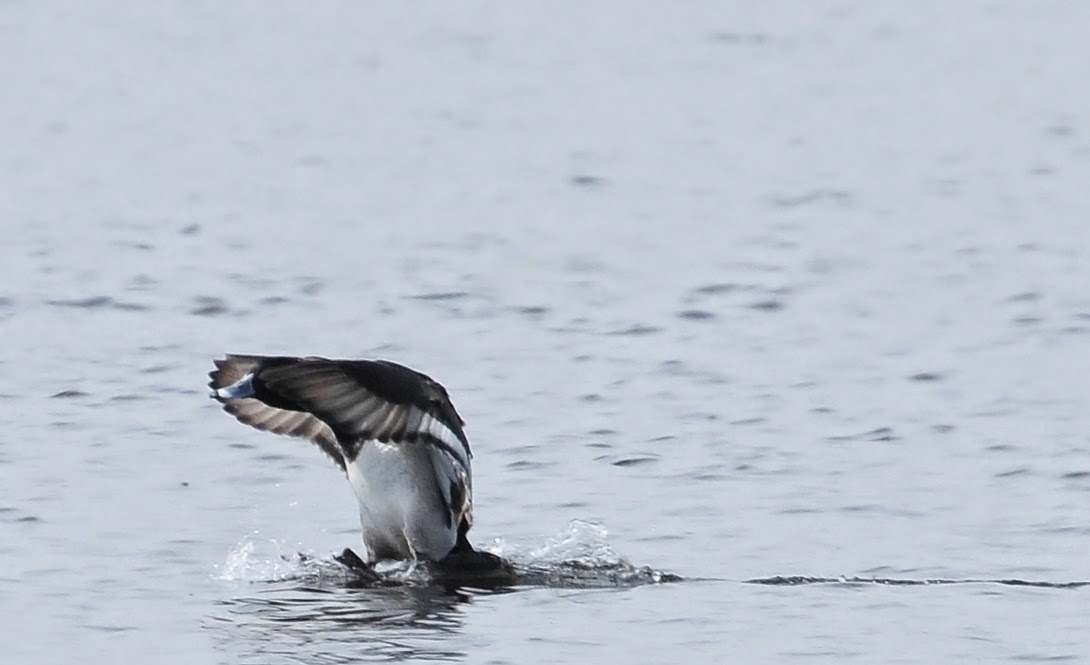 
With the next bird (a female I presume) Steve didn't see the wing bar so the Scaup parent identity isn't fully confirmed, although Lesser Scaup is presumed.  Steve says he usually picks these hybrids out by the head shape which is like that of Ring-necked Duck but just a bit subdued. 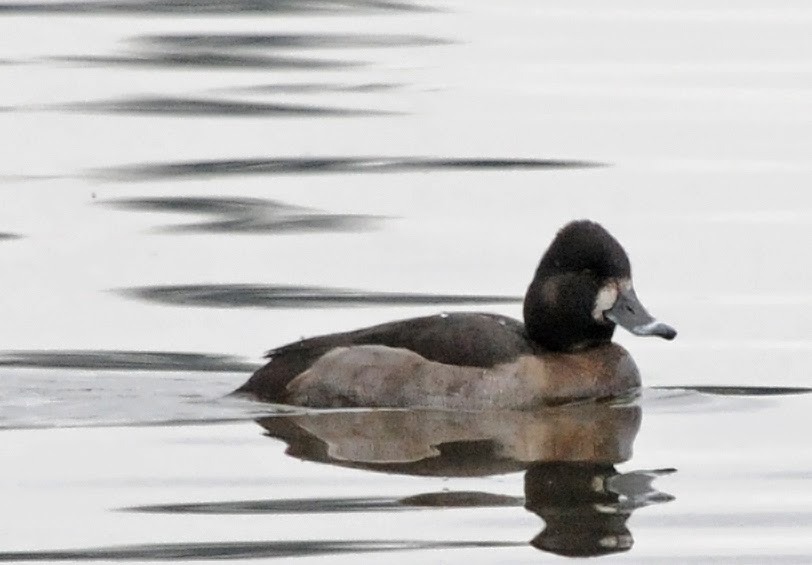 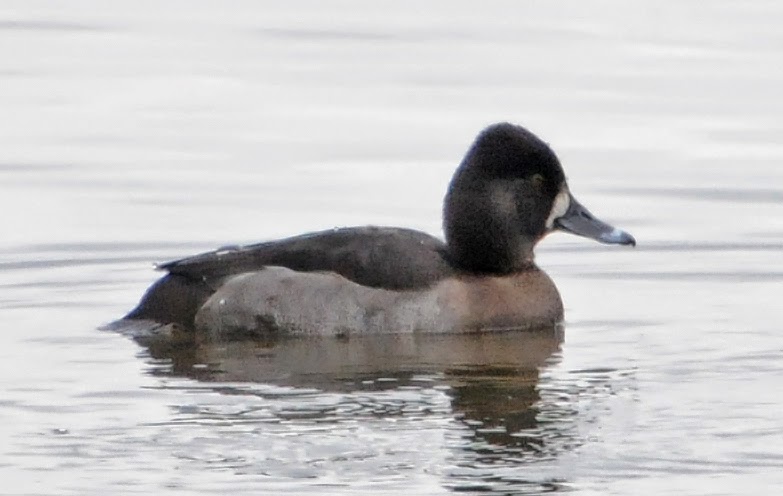 
On the next bird I think there are a number of pointers towards Ring-necked Duck parent as opposed to Tufted Duck, which was also considered.  On the bill the pale subterminal band is strong and on one or two of the photos there seems to be a hint of an indistinct pale line round the base of the bill, which could only come from Ring-necked Duck if a real feature as opposed to a trick of the light.  The flanks are sullied grey which we would not expect from a Tufted Duck hybrid and critically, I think, the white at the front of the flanks extends up in a point round the shoulder much like it does on Ring-necked Duck and more than it does on Tufted Duck (or either Scaup species).  Pete tells us that the mantle appeared slightly paler than it looks in the photos, with more contrast between that and the head and breast.  Apparently Lesser Scaup was the most numerous species in the 400-strong Aythya flock in which Pete found this bird, and that seems a good bet for the grey-backed parent although it is perhaps hard to be absolutely sure Greater Scaup is not involved. 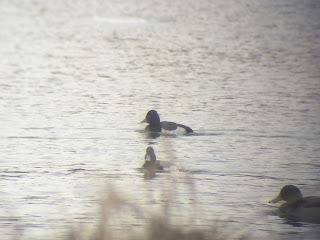 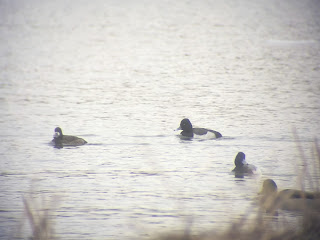 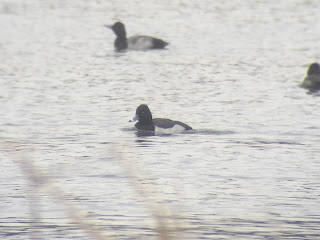 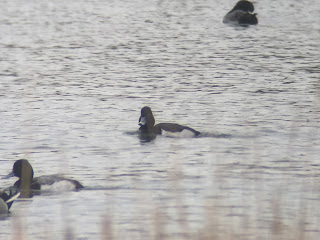